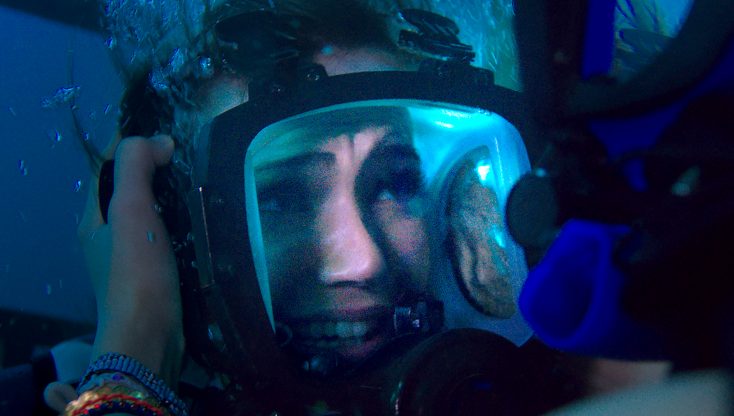 If you thought the trailers for the new underwater thriller “47 Meters Down” made the film look like a made-for-TV release, you weren’t entirely wrong. The movie was scheduled to go straight to DVD before its original distributor, Dimension Films, sold the rights to Entertainment Studios Motion Pictures. In an attempt to cash in on Discovery Channel’s Shark Week craze and no doubt Mandy Moore’s “This is Us” fame, Entertainment Studios Motion Pictures decided to release the film in theaters instead, a week before Shark Week begins.

What’s interesting to note, however, is that “47 Meters Down” doesn’t really feel much like a shark movie at all.

The story itself is quite simple. Two sisters on vacation in Mexico decide to go cage diving to see some great white sharks up close. Lisa (Mandy Moore, “Saved!”), on the rebound after a devastating breakup, is out to prove to her ex that she’s not as boring as he thought—although she still needs a little extra encouragement from her younger, more adventurous sister Kate (Claire Holt, “The Originals”) to get into the rusty, rickety cage. Once the two are lowered 16 feet into the water, though, Lisa realizes what an amazing, once-in-a-lifetime experience she’s agreed to and quickly forgets about the dangerous-looking cage she’s trapped in.

When the sisters try to take an underwater photograph to show Lisa’s ex just how adventurous she can be, they accidentally drop the waterproof camera—and see it immediately getting swallowed by a nearby great white. Anxious to get back on the boat, Lisa asks the skipper, Captain Taylor (played by Matthew Modine, “Stranger Things”), to raise the cage back out of the water as Kate disapprovingly looks on. While the cage is being lifted back up to safety, however, the boat winch breaks, causing the cage to plummet to the bottom of the Pacific Ocean floor, 47 meters below.

What follows is more a race against time than a fight for survival against some great whites as Lisa and Kate deal with having a limited oxygen supply while being trapped underwater. Sure, there are sharks swimming in the surrounding waters, but they never feel as threatening as the notion of Kate and Lisa running out of air before being rescued.

Since at 47 meters below Kate and Lisa are just out of communication range with the boat, the young women are forced to leave the protective cage a couple of times during the 89-minute film to try to radio for help closer to the ocean’s surface. Needless to say, these scenes are where the shark-infested waters really come into play. However, distorted dialogue due to the scuba masks Lisa and Kate are wearing and dark lightning make it hard for these scenes to have the impact they should since it’s difficult for viewers to follow what’s going on. One scene in particular is extremely ineffective because viewers can’t tell if the shark actually bit a character or if she got away.

Holt and Moore do the best they can with the hurried script by writer-director Johannes Roberts (“The Other Side of the Door”) and Ernest Riera (“The Other Side of the Door”), which rushes any character development at the start of the film to get to the underwater action. Moore’s character does get the opportunity to develop a bit, though, as the story goes on, when Lisa finally decides to stop hyperventilating about the situation she’s in and do something about it.

A semi-predictable third act twist provides most of the film’s heart-pounding action, although it’s too little, too late. While the end of the film does answer the question of whether or not Lisa and Kate survive, it also leaves viewers with several questions that go unanswered—like what actions are taken against Captain Taylor and his crew, if any.

In the end, “47 Meters Down” still plays like the made-for-DVD release it was instead of a big-screen summer blockbuster. With so many other must-see movies at the theater this summer, audiences are advised to wait until the film’s inevitable home video release, as this claustrophobic tale of being trapped underwater might actually play better on a smaller screen.

Tags:47 Meters Down, Claire Holt, Johannes Roberts, Mandy Moore, Matthew Modine
Previous PostPhotos: ‘47 Meters Down’ Is All Wet
Next PostJeff Bridges and T-Bone Burnett on the Fusion of Film and Music