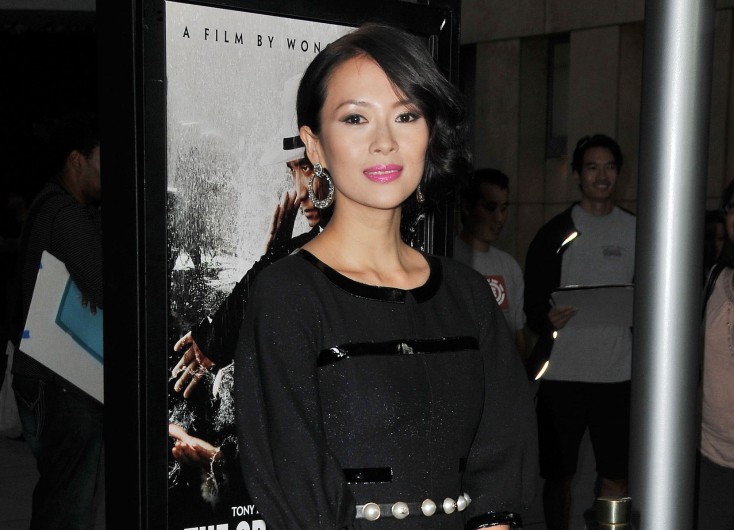 Ziyi Zhang at the Los Angeles Screening of “The Grandmaster” held at the ArcLight Cinemas in Hollywood, CA. The event took place on Thursday, August 22, 2013. Photo by PRPP_PRPP.

HOLLYWOOD—It was cold and rainy on the set of Wong Kar Wai’s “The Grandmaster,” but Thursday night it was a different story as the film had its LA premiere at the Arclight Cinemas in Hollywood. The film’s star Ziyi Zhang walked down the press line wearing a black Chanel knee-length dress accented with ivory pearls. She looked beautiful on the red carpet as event photographers shot hundreds of photos of the famous Chinese actress.

It wasn’t quite a glitzy while shooting the film, though, Ziyi told correspondent Chris Trondsen of Front Row Features’ affiliate Pacific Rim Video. It was cold, she said.

“Wong Kar can pick anywhere he wants (to shoot) but picked this coldest place ever,” she said. “After I shot the movie, my friend asked me to going skiing, (and) I said, ‘No. I don’t want to. I don’t want to go into the cold anymore.'”

“The Grandmaster” is based on the life of Ip Man, the martial arts master who trained Bruce Lee. Ziyi plays Gong Er, a woman who seeks to gain her family’s honor by challenging Ip Man (played by Tony Leung Chiu Wai). Gong Er’s fight with Ip Man is considered the epic fight of the film.

Ziyi dubbed the scene as “Love At First Fight.” She explained to Pacific Rim Video, the length it took to shoot the scene, “It’s only part of the movie for three minutes, but it took three weeks to shoot and we prepared for six months for the different fight scene. I love the scene because it’s not only action but romance between them.”

The film opens has opened in a limited run engagement in Los Angeles and New York.

Bill Paxton says he’s lucky to be an actor