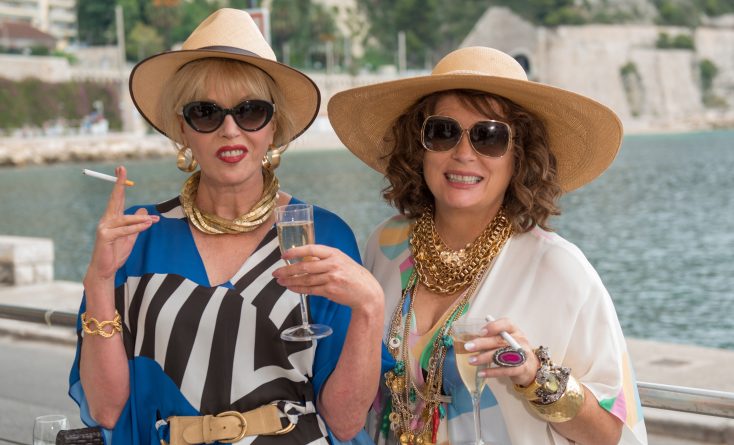 (From L-R): Lulu as herself, Gwendoline Christie as herself, Jennifer Saunders as “Edina,” Abbey Clancy, Joanna Lumley as “Patsy,” Sadie Frost as herself, and Tinie Tempah as himself ABSOLUTELY FABULOUS. © 20th Century Fox. CR: David Appleby.

Still as delusional, drug-addled and deliciously despicable as ever, the “Absolutely Fabulous” Britcom’s Edina “Eddy” Monsoon (Jennifer Saunders) and Patsy Stone (Joanna Lumley) return for a big-screen debut that seems to share the pair’s own endearingly self-involved sensibilities. Putting up an expensively showy front, brazening through bad patches and giving offense with casual obliviousness, the movie and its main characters exist in a world where life is their party. And if you don’t recognize cameo stars like Graham Norton, Jean Paul Gaultier or most of the other various entertainment and fashion-world guests here on sight, well that’s your problem, isn’t it, sweetie?

Frumpy and flustered fad-follower Eddy is a high-living PR agent with money troubles now that Lulu and Emma “Baby Spice” Bunton are her main clients, and neither of them are happy with her services. (Showing a good sense of humor, both singers appear as themselves.) Saunders, who also wrote the film’s screenplay, manages to give the shockingly shallow Eddy more than a hint of desperation as she resolutely keeps self-awareness at arm’s length. The best of her casually cutting asides comes after Patsy refers to the long-ago era when Brigitte Bardot was “just out of nappies.” “She’s back in them now,” Eddy deadpans.

As always, Lumley is a scene-stealing sensation as Patsy, a smugly bitchy magazine editor with an outrageously outsized sense of entitlement and a preposterously promiscuous past. When she tries reconnecting with actor Jon Hamm by reminding him of their history, he pleads, “You took my virginity. Please leave me my sanity.” (Later, we see that he apparently was unable to resist her age-undiminished charms.) Patsy also has built up enough of a tolerance to drink, drugs and general debauchery that she survives an extended tasering without a flinch.

After accidentally pushing both would-be new client Kate Moss and Eddy’s loopy personal assistant Bubble (Jane Horrocks) to their seeming watery deaths in the Thames, Eddy absconds with 13-year-old granddaughter Lola (the easygoingly charming Indeyarna Donaldson-Holness) and Patsy to France. Eddy’s long-suffering daughter Saffron (Julia Sawalha) and her new detective-inspector boyfriend Nick (“Peep Show” star Robert Webb) go in search of the fugitives, whose insatiable appetite for the good life leads them to attempt a shady “Some Like It Hot” solution to their money problems.

“Glee” star Chris Colfer is flamboyantly frank as Eddy’s brutal-with-a-brush hairdresser (“Take the pain, *****!”), and Kathy Burke is perfection in a tiny role as Patsy’s gruffly domineering boss Magda. Designer Stella McCartney, who demands that Eddy not wear her clothes and eventually throws a brick through her window, also resents Patsy’s 1969 relationship with dad Sir Paul. “And the world blames Yoko,” she sighs.

The TV show’s edgy humor surfaces in jokes about topics including transgenders, Ebola, a white woman who declares that she’s black and a jacuzzi that’s like “a smoothie of old sperm.”

While the movie’s big-screen budget permits production luxuries such as big fashion-show launch parties and a scenic side trip to Cannes, the story plays out like a satisfyingly extended episode of the TV series. Director Mandie Fletcher previously helmed the show’s three 20th anniversary specials, as well as two seasons of Rowan Atkinson’s brilliant “Blackadder.”

Asked at one point to explain her unlikely lifetime friendship with Eddy, Patsy matter-of-factly replies, “It’s bloody good fun.” Likewise, “Absolutely Fabulous” fans won’t have to think twice about whether to drop in on this terrible twosome again.