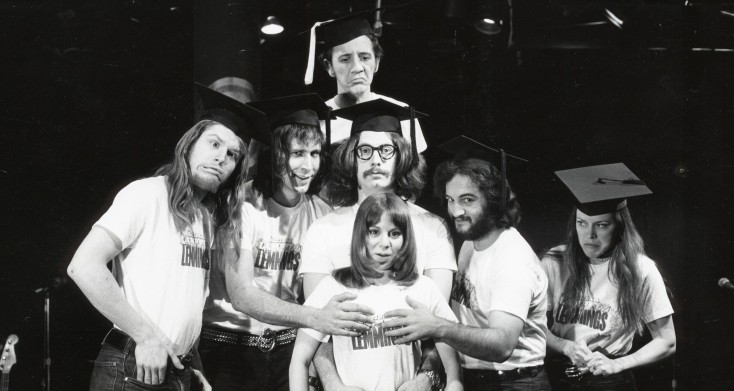 The documentary “Drunk, Stoned, Brilliant, Dead: The Story of The National Lampoon” is so behind-the-scenes fascinating that it should appeal even to those born long after the groundbreaking humor magazine’s early 1970s heyday. It opens in theaters and will be available ON Demand and on iTunes Friday, Sept. 25.

It’s hard to explain how shockingly irreverent and transgressive the Lampoon seemed in its first few years, with its heady mix of intellectual wit, lowbrow smut, underground-style comics, incisive parodies and gleefully contemptuous satire. There was nothing like it on American newsstands, just as the magazine has no real equivalent today.

An early pictorial titled “Stranger in Paradise” featured a stone-faced Hitler look-alike in various tropical island vacation settings. “The Vietnamese Baby Book” was anti-war humor at its darkest. A phony ad (that resulted in a lawsuit) noting that the VW Beetle could float proclaimed, “If Ted Kennedy drove a Volkswagen, he’d be President today.” And one issue’s cover, showing a worried canine with a gun to its head, famously announced that “If you don’t buy this magazine, we’ll kill this dog.”

Many of the mag’s writers went on to bigger things in TV (where “Saturday Night”—before it added the “Live”—picked off Michael O’Donoghue, Chevy Chase and several others), movies (Lampoon co-founder Doug Kenney wrote “Animal House” with regular contributor Chris Miller and director Harold Ramis) and even political punditry (where P.J. O’Rourke later made his mark as a conservative humorist).

Director Judd Apatow, one of many Lampoon fans who express their appreciation for the magazine’s creators on camera, says that “they became all of modern comedy.”

The documentary features numerous interviews with the magazine’s principals and freelancers. As writer Ellis Weiner notes, “Doug did the dirty stuff, Henry (Beard) did the brainy stuff and O’Donoghue did the outrageous stuff.” The magazine reached new heights when cartoonist Michael Gross (whose mission was to “empower parody through realism”) took over as art director in year one.

Thanks to the terms of a buyout deal that became incredibly valuable due to the magazine’s unexpected success, founders Kenney, Beard and Robert Hoffman took the money and ran in 1975. (Beard’s parting words: “I’ve hated every minute of this.”) Just about the only bright spot for the magazine after their departure was the arrival of writer John Hughes, who later became one of the most successful comedy writer-directors in Hollywood.

Director Douglas Tirola does a good job of assembling the reminiscences of staffers who recall both the politically incorrect subversiveness of the magazine as well as the petty jealousies, backstabbing competitiveness, rampant egomania and undeniable talent of its writers and artists.

The film’s most interesting subject (and that’s saying a lot) is Kenney, a workaholic writer who had a breakdown, left the magazine, was resented when he returned, cashed out, went Hollywood and then either fell, jumped or was pushed off a cliff in Hawaii. If ever a troubled genius deserved a biopic of his own, look no further.