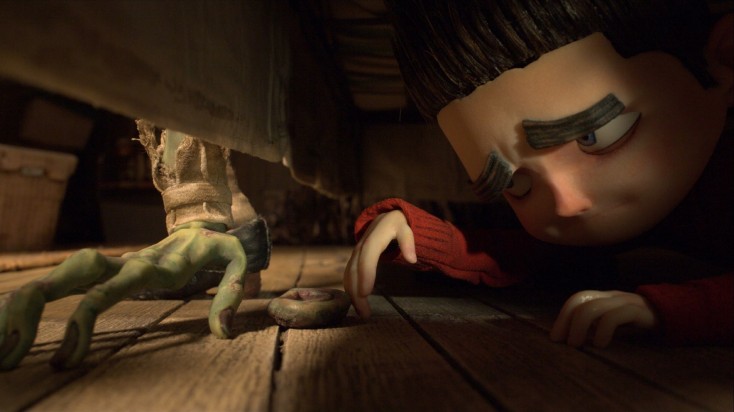 Beautifully animated, genuinely funny and unexpectedly touching, the zombie-adventure comedy “ParaNorman” may be the most thoroughly enjoyable all-ages treat of the year. It’s like Halloween candy in August, or maybe an early Christmas present delivered by undead Thanksgiving Puritans.

“ParaNorman” was produced by the Laika studio that made 2009’s “Coraline” with the same stop-motion animation technique, in which posable doll-like figures are photographed one frame at a time to simulate motion. The finished product is so flawlessly smooth, convincing and elaborately imaginative that the result will be mistaken by many for Pixar-style state-of-the-art computer effects. That’s actually a compliment, even if the patiently painstaking craftspeople who created every scene of “ParaNorman” using physical models may not think so.

The movie’s characters have a wonderfully tactile appearance, from Norman’s hairstyle that looks like dozens of upside-down watercolor brushes to the various appendages that members of the walking dead end up losing and replacing. Gorgeously detailed settings include a shadowy cemetery, a frightening forest and a not-so-typical small town. Also, this is one of the few 3D movies that looks bright, sharp and generally great with an added dimension to show off its charms.

Storywise, “ParaNorman” has the humor and heart of a not-just-for-kids classic. Thoughtfully low-key 11-year-old Norman Babcock (voiced by Kodi Smit-McPhee of “The Road” and “Let Me In”) sees dead people, even if no one believes him. When his mother (Leslie Mann) says Norman’s dearly departed grandmother (Elaine Stritch) “is in a better place now,” Norman replies, “No she’s not, she’s in the living room.” A neighborhood’s worth of the green-glowing deceased greet Norman on his way to school, where he is ignored by most and regarded as a “ghost jerk” by bully Alvin (Christopher Mintz-Plasse).

Anna Kendrick (“Up in the Air,” “Scott Pilgrim vs. The World”) is hilariously valley-girlish as Norman’s empty headed but huge-bottomed older sister Courtney, whose standard outfit is a pink track suit. She swoons over Mitch (Casey Affleck), the overmuscled older brother of Norman’s chubby and innocently childlike classmate Neil (Tucker Albrizzi).

The four of them and Alvin end up trying to save their town when a hanged witch’s 300-year-old curse raises the corpses of her Puritan-era accusers. The clever screenplay by Chris Butler (who co-directed with Sam Fell) manages to shift tone as the story develops without ever seeming inconsistent. Misunderstood and quietly miserable Norman goes from deadpan sad sack to life-risking action hero without losing any of his endearingly sweet sensitivity. The movie somehow mixes slapstick zombies, a crazed citizenry and apocalyptic destruction with a shockingly emotional ending that may just bring tears.

Some of the movie’s small moments are as memorable as its big scenes. Alvin, who is so dumb he can’t remember how to spell his own name when he’s tagging a bathroom stall, performs an oddly sincere breakdance routine on the street. A family station wagon is cartoonishly strange, and a detached arm that uses its fingers to walk around is weird. A vending machine dispenses candy with unlikely names such as Greasy Pieces and Garlic Breath.

The movie’s appealing and refreshingly non-bombastic score is by Jon Brion, whose previous credits include Miranda July’s “The Future” and David O. Russell’s “I (Heart) Huckabees.”

Stick around for a short time-lapse scene at the end of the closing credits that shows the puppet version of Norman being molded, painted and brought to life with movie magic.

Highly recommended, this is one of the best films of the year.