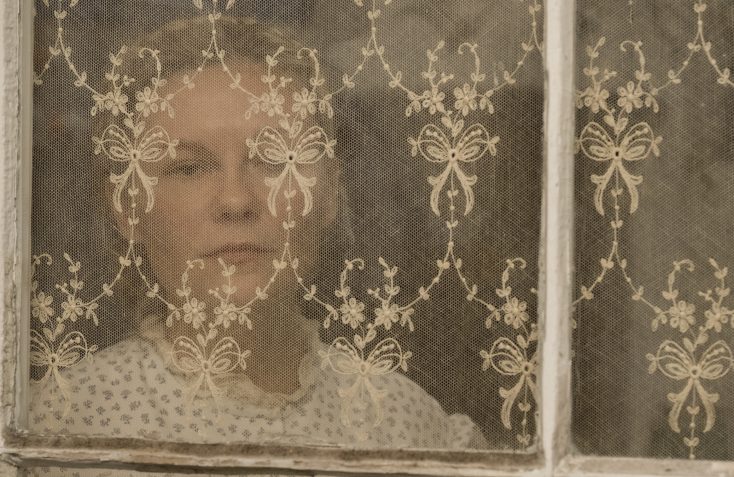 Director/screenwriter Sofia Coppola’s gauzily gutless remake of director Don Siegel’s deliciously devilish “The Beguiled” betrays nearly every earthy element that made the 1971 version such a wickedly guilty pleasure. Where the Clint Eastwood-starring original was as trashy and vulgar as sweaty rock and roll, this colder and cleaned-up re-creation is like a lethargic Longines Symphonette rendition that somehow manages to be literally bloodier yet listlessly bloodless.

The most important difference between the two films is that Eastwood’s original McBurney is a shamelessly dishonest and smirkingly deceitful manipulator from the get-go. His claims that he is actually a pacifist and someone who respects the land are revealed as outrageously untrue by quick flashbacks intercut with his lies, and there never is any doubt that he would have his wanton way with any female in the vicinity if given the opportunity.

Colin Farrell’s McBurney, on the other hand, is so amiably and unthreateningly charming for so much of the staidly slow-moving remake that his third-act raging outburst feels as out of place as putting a pie fight at the end of “My Dinner With Andre.”

Nearly every change that Coppola made to the original film’s story is bafflingly misguided. The problem isn’t that she tried to class up a genre film (David Cronenberg’s “The Fly” and the Coen brothers’ “True Grit” come to mind as two such upgrades that worked). The problem is that she left out so many sinfully rich ingredients from the recipe of 1971’s decadently sweet treat that her version becomes a blandly flavorless bore.

Deleting a tense scene in which even visiting Confederate soldiers express ungentlemanly interest in the student body removes the idea that the school faces threats from all sides. A skeptical black female slave character that McBurney tries to manipulate in the original has been eliminated, and so has a captive crow with a broken wing, taking away two allegories to McBurney’s situation. There’s no mention of Martha expecting Edwina to take over the school someday, setting the stage for a later sense of betrayal.

Also, forget about seeing Martha’s erotically charged dream of a torrid three-way with McBurney and Edwina, or an equivalent of the “hussy” Carol very seductively inviting McBurney to her attic bedroom where she later is discovered very naked with him. The original’s scene in which night prowling McBurney has to decide between that attic or the closed-door bedrooms of Martha and Edwina is missing, which reduces the impact of his fateful choice. Worst of all, Coppola’s version so mishandles a later scene in which McBurney is subjected to some rather drastic surgery that the procedure seems to be performed for his own legitimate medical good, instead of as a cruel punishment for his sins. Incredibly, McBurney’s discovery of what has happened to him occurs offscreen.

Even the movie’s title, which cleverly could refer to either the maleficent McBurney or his horny hostesses in the original film, isn’t as good a fit on this watered-down version. Farrell’s McBurney seems sincerely charming and more amused than aroused by his keepers until the script makes him otherwise, as opposed to the thoroughly devious Eastwood version. And the females in the remake aren’t as emotionally needy or (in the case of the Alicia formerly known as Carol) as irresistibly siren-like. Even the movie’s classic ending (which I won’t spoil) is slightly botched, retaining the payoff but altering a crucial detail that softens its impact.

Even a change that technically makes Coppola’s film more faithful to the novel, by revealing that her McBurney is a recent Irish immigrant who took $300 to assume another man’s place in the Union army, ends up diluting the story, which works better when McBurney is a less exotic intruder.

Coppola—whose past works include the similarly female-centered “The Virgin Suicides,” “Lost in Translation,” “Marie Antoinette” and “The Bling Ring”—seems to have missed the whole point of going slumming: You’re supposed to get a little more dirty in the process.

Matt Damon Delivers as ‘The Martian’