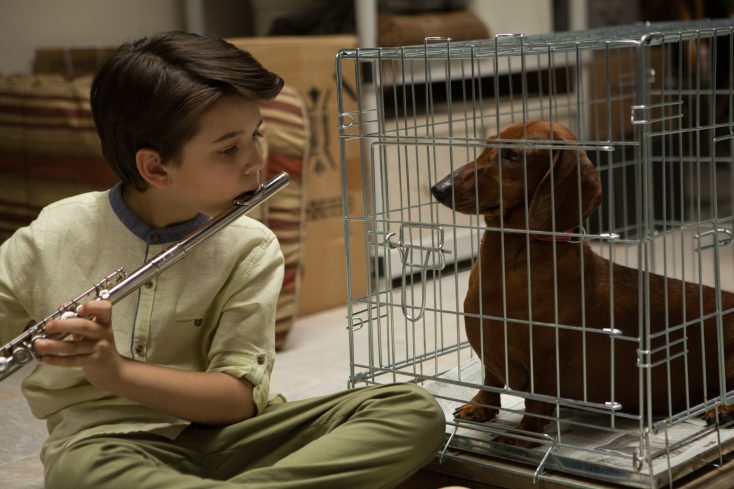 Greta Gerwig is one of the owners of a dachshund in “Wiener-Dog.” CR: Linda Callerus/Amazon Studios & IFC Films

Fans of the always audaciously uncommercial writer-director Todd Solondz, who is perhaps best known for his extremely dysfunctional 1990s family affairs “Welcome to the Dollhouse” and “Happiness,” needn’t worry that his first pet-centered production would be any less disturbing, deadpan or dark than those human-centered tragicomedies. It’s such a given from the outset that the title character here will have a less-than-ideal life story, in fact, that canine lovers may not know whether to leave or cry.

The anthology-style film (complete with an amusing musical intermission) follows the destiny of a primarily passive dachshund through four separate tales with different casts. Her first owners are an upper-class family with a short-tempered dad (Tracy Letts) and a laughably earnest mom (Julie Delpy), who tells an unintentionally hilarious story about the repeated rape of a French poodle named Croissant by a mutt named Mohamed to explain why spaying is a good idea. If you can’t imagine the potential humor in that sort of thing, or in the revelation that the perpetrator was skinned and turned into a purse, this flick definitely won’t be your can of Alpo.

The couple’s young and sickeningly sweet cancer-survivor son (Keaton Nigel Cooke), like Jonathan Osser’s Mikey in Solondz’s “Storytelling,” is patiently inquisitive to the point of being Andy-Kaufman infuriating. His questions about suffering, death and “what about God?” are at first dismissed by mom with a calmly reasonable, “We don’t believe in God.”

Those topics arise after Wiener-Dog (for such is the first name she’s given) has a dramatic bout with diarrhea that inspires a ridiculously long tracking shot of the result, followed by even worse health complications.

Her next owner is the Solondz cinematic universe’s perpetually put-upon protagonist Dawn Wiener, first played by Heather Matarazzo in “Welcome to the Dollhouse” and mentioned in passing (quite literally) in “Palindromes.” Dawn, whose own childhood nickname was Wiener-Dog and who renames the dachshund Doody, is portrayed with an endearing mixture of uncertain but quietly indomitable hopefulness by Greta Gerwig.

Reunited with her sullen not-exactly-boyfriend Brandon McCarthy from “Welcome to the Dollhouse” (played here with convincingly lethargic indifference by Kieran Culkin), she takes a road trip to Ohio for a reason that’s unrelated to crystal meth…although desperate Dawn seemingly wouldn’t mind even if it were.

There’s no link between that chapter and the next, in which bitterly frustrated film professor Dave Schmerz (Danny DeVito, in full misery mode) somehow has taken possession of the pooch. Having to endure duplicitous agents, laughable know-nothing students and a smugly successful alumnus who mocks Schmerz’s “What if? Then what?” guidelines has turned dismal Dave into what his doctor calls a “ticking time bomb.”

The film’s final chapter is its darkest, in which the dachshund somehow has ended up with the elderly and gruffly joyless Nana (a compulsively insulting Ellen Burstyn). She may be dying, but as she points out, so is everybody else. When her seemingly solicitous granddaughter Zoe (Zosia Mamet) shows up with her angrily self-absorbed would-be artist boyfriend in tow (“**** Damien Hirst!”), it’s soon obvious that presenting Nana with an ostrich egg isn’t the real reason for their visit. Also, Nana has renamed the dog Cancer, which sort of says everything.

Like all of Solondz’s films, “Wiener-Dog” is so blithely odd, utterly unpredictable and apparently unconcerned with attracting a mainstream audience that watching it feels something like witnessing an experimental performance-art piece. Even if this isn’t his best work, it’s still so compulsively interesting that it could be the basis of an anthology TV series. Each week, the less-than-dynamic dachshund could show up with a new owner in a different so-sad-it’s-strangely-funny situation.

Could there be a more fitting mascot for this dire decade than that kind of low-key, bad-luck “Lassie?”