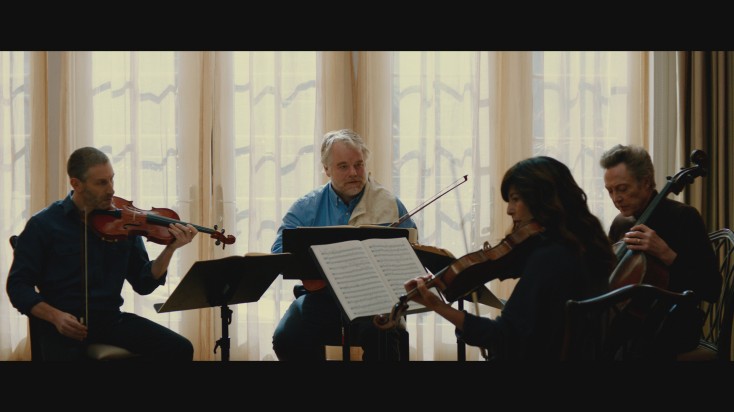 ****NOTE TO EDITORS: Release date is Friday November 2, and reviews are embargoed until the week of release (October 29). ***

Like its four emotionally conflicted main characters, “A Late Quartet” has discordant undertones lurking beneath its respectably dignified surface. What initially appears to be an elegantly highbrow melodrama about longtime members of a successful string quartet includes some dissonant departures into clunky soap opera and awkward bedroom farce. Yet despite occasionally seeming like a Woody Allen comedy minus the laughs, the movie succeeds because of its talented and always interesting cast.

Long-simmering tensions are brought to a boil after cellist Peter (Christopher Walken), whose wife died a year earlier, gets a life-altering medical diagnosis. Walken gives the role a poignant mixture of haunted regret and noble resignation. His is the movie’s least flashy and most restrained performance.

The prospect of the quartet having to find a replacement for Peter makes Robert think that such a “new start” might alter group dynamics in his favor. Instead, that false hope sets in motion a series of events that could end the group’s quarter-century history.

The screenplay’s most awkward subplot involves Robert and Juliet’s resentful daughter Alexandra (Imogen Poots), a beautiful violin student who is irresistible enough to seduce the otherwise icy Daniel. A runner-up for the movie’s most out-of-tune moment is a one-night stand between middle-aged Robert and a model-gorgeous flamenco dancer (Rebeca Tomas) who looks half his age. That unlikely encounter has an even more illogical and frustrating followup that’s inconsistent with Robert’s awareness that his wife no longer loves him, if indeed she ever did.

The movie survives those flat notes because the piece as a whole is so unexpectedly involving and entertaining. A story about the personal problems of four well-to-do classical musicians may sound like the kind of thing that would appeal only to the tuxedo-and-opera-glasses crowd. But even the most unrefined lout will relate to this foursome’s family-style resentments, recriminations and rapprochements.

Director Yaron Zilberman, who cowrote the movie’s screenplay with Seth Grossman, only goes wrong when the movie shifts from tastefully literate decorum to scenes that seem like patronizing appeals to the unsophisticated. Peter’s recollection of his first meeting with Pablo Casals is charmingly wistful, and anecdotes about T.S. Eliot and Franz Schubert’s fondness for Beethoven are fascinating. But a lover’s frantic fire-escape flight from a bedroom to avoid discovery is almost slapstick silly, a mother-daughter showdown covering topics from abandonment to abortion is a tad too over-the-top and a rehearsal shouting match gets so heated it threatens to end with El Kabong-style violin violence (which thankfully doesn’t occur).

The interplay between the main characters makes those flaws easy to overlook, as they manage to evolve yet ultimately remain true to their art.

On the technical side, all of the actors play their instruments believably enough to the layman’s eye to appear as if they have been practicing and performing together for decades. The quartet’s rendition of Beethoven’s Opus 131 C# Minor Quartet (actually performed by the Brentano String Quartet) that closes the film is appropriately and genuinely moving.