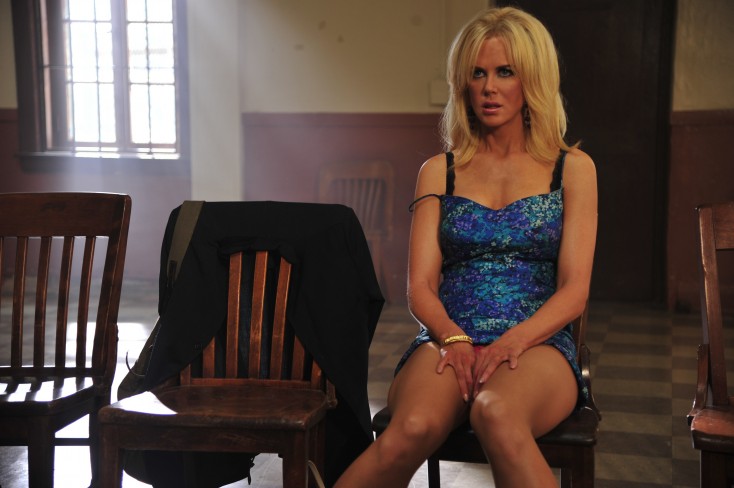 Director/screenwriter Lee Daniels’ “The Paperboy” is a 1960s-set film noir that’s a sweaty and sinister pleasure. Part mystery, part thriller and entirely engrossing, this offbeat treat may be the year’s most satisfying slice of pulp-fiction nastiness.

Less surreal than Daniels’ underrated 2005 hitman fantasy “Shadowboxer,” “The Paperboy” also has a small-town Florida setting that couldn’t be more different from the 1980s Harlem of his 2009 inner-city melodrama “Precious.”

Nicole Kidman is unforgettable as the shamelessly carnal Charlotte Bless, a self-destructive but far from naive sex object who enjoys corresponding with and fantasizing about incarcerated murderers. Her latest obsession is the crudely primal Hillary Van Wetter (an unexpectedly convincing John Cusack), who is on death row for killing a Florida sheriff.

Two Miami newspaper reporters intent on exonerating Van Wetter enlist Charlotte to join them on prison visits to entice the tight-lipped thug into talking. For Ward Jansen (Matthew McConaughey), the assignment is a homecoming to the backwater burg of Lately, Florida, where his father (Scott Glenn) edits the local newspaper.

Mom ran off years ago, dad’s now shacked up with a no-class harpy who works for him at the paper (Nealla Gordon) and Ward’s aimless college-dropout kid brother Jack (Zac Efron) still lives at home. Macy Gray is good in a somewhat stereotypical comic-relief part as the family’s taken-for-granted black housekeeper Anita, who occasionally serves as a mother substitute for Jack.

The other Miami reporter is the black and British-accented Yardley Acheman (David Oyelowo). His motive for wanting to overturn Van Wetter’s conviction is more about making a name for himself than seeing justice done, and he describes Charlotte as “one nasty little nutjob.” Yardley is snobbishly disdainful of deep-south suburban provincialism in general and the region’s racial attitudes in particular. As Ward’s father notes, “He seems mighty sure of himself for a colored.”

Yardley and Ward set up working quarters in the Jansen family garage, an odd but visually interesting choice. Jack, who serves as their driver and unofficial assistant, instantly becomes infatuated with sultry Charlotte. In one of Jack’s daydreams, Charlotte eagerly gets in the car wearing a wedding gown.

A little of McConaughey’s lazily drawling good ol’ boy act goes a long way, but all of the other actors here are at the top of their game. Kidman’s fearless commitment to her role as the tawdry and delusional Charlotte is the standout. From a shockingly salacious pantomime she performs in the prison’s visiting area to her utterly immodest method of treating Jack’s jellyfish stings, the character seems to have no personal boundaries. The pathology of why Charlotte is drawn to men like Van Wetter is unexplained but not unbelievable in the context of her apparently damaged-goods persona.

Efron finally gets a good dramatic part as the hopelessly smitten Jack, who is content to hang around the house in his underwear doing nothing until his lust for Charlotte brings out the man in him. Cusack is acceptably evil as the cold-eyed and slack-jawed Van Wetter, an alligator poacher who’s clearly guilty of something, if not several somethings.

Adapted from Pete Dexter’s 1995 novel of the same name, “The Paperboy” takes a few satisfyingly snaky turns that lead to unexpected destinations. It’s not always a pleasant trip, but definitely one to remember.