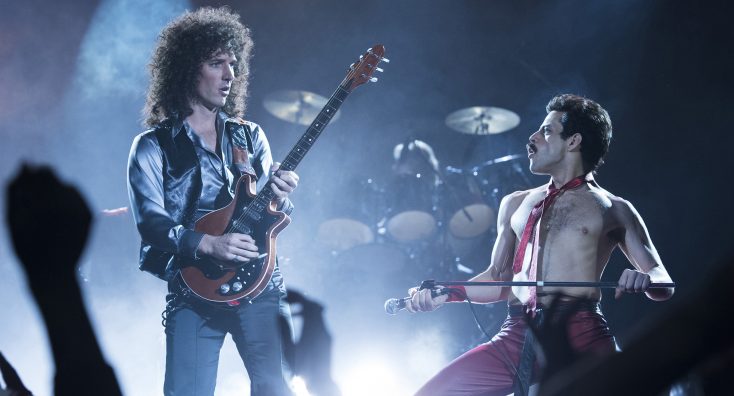 Not to say that the movie is bad, especially given all of the problems the production was plagued with since Queen’s lead guitarist, Brian May, first mentioned the film back in 2010. From Sacha Baron Cohen (“Da Ali G Show”), who was originally supposed to play Queen’s flamboyant lead singer, leaving the project, to director Bryan Singer (“X-Men”) being fired in the midst of production and Dexter Fletcher (“Eddie the Eagle”) stepping in to complete the film, “Bohemian Rhapsody’s” journey to the big screen would arguably make an interesting movie itself. The biggest challenge its filmmakers failed to overcome, however, was making a movie that wasn’t all flash and no substance.

While the screenplay by Anthony McCarten (“Darkest Hour,” “The Theory of Everything”) touches upon a lot during the film’s 134-minute run time, it never delves too deeply into any one moment in Queen’s history. Instead, the 20th Century Fox film plays almost like a visual paint by numbers, touching upon all of the moments Queen fans would expect from the British rock band’s biopic—how Mercury joined the group, how he struggled with his sexuality, even which band members were behind which classic hits—but then briskly moving along to the next noteworthy moment. The only exception is the band’s legendary 1985 performance at Live Aid, which is recreated with such painstaking detail at the end of the film fans can’t help but wonder why the rest of the movie wasn’t treated with the same labor of love.

Nevertheless, Rami Malek (“Mr. Robot”) does a phenomenal job as Mercury, commanding audiences’ attention just like Mercury always would. While he sadly doesn’t sing all of the band’s songs himself (he’s actually lip syncing to tracks he recorded of his own vocals mixed with YouTube Queen-singing sensation Marc Martel), Malek does add a lot of heart to the relatively emotionless story with his captivating performance. The scenes he shares with Lucy Boynton (“Sing Street”), who plays Mercury’s former fiancée, Mary Austin, are some of the film’s best, as viewers never doubt how strongly Freddie feels for her even when he’s coming to terms with the truth about his own sexuality.

The rest of the cast, which includes Ben Hardy (“X-Men: Apocalypse”) as Queen’s drummer, Roger Taylor, Joseph Mazzello (“Jurassic Park”) as Queen’s bass guitarist, John Deacon, and Gwilym Lee (“Jamestown”) as the aforementioned Brian May, does a commendable job as well, although “Bohemian Rhapsody” is truly Freddie Mercury’s story. Queen fans will definitely appreciate the cameo by “Wayne’s World” star Mike Myers, though, as a fictional EMI record executive who refuses to release the film’s titular song because he can’t see anybody head-banging along to it in the car. The sequence that follows of all the bad reviews “Bohemian Rhapsody” received after its initial release is also quite comical considering that’s probably the song the group is best remembered for these days (though granted they released many timeless tracks).

True fans, however, can’t help but feel disappointed by the safe biopic, which tries so hard not to tarnish Mercury’s reputation it hardly lets audiences know the real man behind the mic. All viewers get are a couple of quick confrontational scenes between Mercury and his dad (Ace Bhatti, “Bend It Like Beckham”) without ever explaining why Mercury felt so strongly about separating himself from his Parsi ethnicity, several scenes of Mercury glancing longingly at random guys as they pass by rather than developing any one significant hook-up or relationship and lots of closeups of cats. Mercury may be a gay icon now, but in the context of the movie, viewers never know whether or not he acted on his feelings toward men until after Mary tells him he’s gay. Considering he comes out to Mary as bi-sexual during the scene, one has to question just how quickly Mercury accepts Mary’s retort and why he didn’t fight for her more considering—as he says many times during the film—she was the love of his life. Like almost everything else in the movie, though, Mercury instantly accepts Mary’s life-changing revelation and the story moves on.

Sacha Baron Cohen reportedly left “Bohemian Rhapsody” over creative differences, as he wanted the film to really showcase who Freddie Mercury was—flaws and all. Watching “Bohemian Rhapsody,” longtime fans can’t help but wish the filmmakers agreed more with Cohen’s vision for Mercury’s story instead of settling on telling this enjoyable, yet ultimately fluffy, PG-13-rated tale. While it’s understandable to want to celebrate such an iconic figure, “Bohemian Rhapsody” never tells Freddie Mercury’s true story and instead just plays like a greatest hits collection of his career with only the bare necessities of his personal life thrown in. For some people, that may be all they want from the film, but for those hoping for more, they’ll be sorely disappointed.