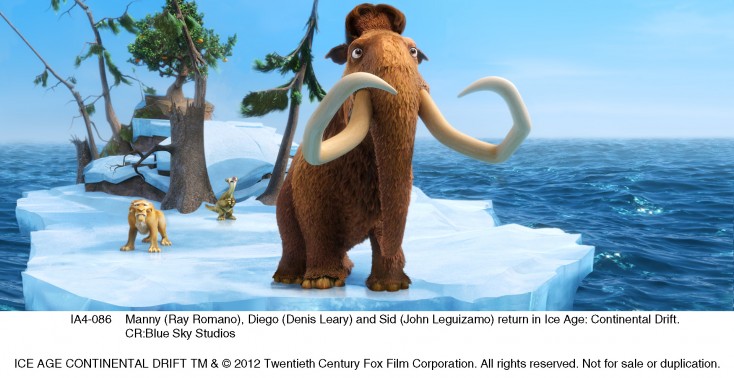 Loaded with extras, the 3D Blu-ray version of the hit animated feature includes a coloring app with enhanced Blu-ray features, interactive features such as “Party with a Pirate!” mode, sing and dance along songs, music videos, deleted scenes, exclusive featurettes, and more. In addition, fans can watch the film in sign along mode with American Sign Language interpretation from actor Sean Berdy (“Switched at Birth”).

The family-oriented and computer-animated feature begins with a literally world-shattering opening scene. Scrat, the unlucky but eternally persistent “squirrel-rat” who has pursued an elusive acorn in all four “Ice Age” movies, plunges to the earth’s core. That’s where he inadvertently causes the earth’s land mass to break into separate continents.

The resulting changes to the landscape above cause big problems for returning “Ice Age” mainstays Manny the mastodon (voiced by Ray Romano), Diego the sabretooth tiger (Denis Leary) and Sid the sloth (John Leguizamo). In a smart storytelling move that isolates them (along with Sid’s cantankerous granny, amusingly voiced by Wanda Sykes) from an ever-growing cast of other family members and friends, the foursome is set adrift on an iceberg during the cataclysm.

Left behind are Manny’s wife Ellie (Queen Latifah) and their rebellious teenage daughter Peaches (Keke Palmer), whose relationship with mohawked mastodon Ethan (singer Drake) has resulted in a hurtful “I wish you weren’t my father” moment. Peaches has plenty of time to regret that remark while dad is lost at sea. A subplot about whether being popular with the adolescent mastodon in-crowd is more important to Peaches than sticking by her adoring little “mole hog” friend Louis (Josh Gad) is very seen-it-before, but its timeless moral remains worthwhile.

The movie introduces an entertainingly species-diverse band of pirates led by Captain Gutt, an outrageously over-the-top orangutan voiced with delicious malice by Peter Dinklage. The “Game of Thrones” actor also proves he can belt out a big Disney-style show-tune with the production number “Master of the Seas.” His slinky second in command is a white sabretooth named Shira (“American Idol”‘s Jennifer Lopez), who becomes Diego’s first-ever love interest in the franchise. Other motley crew members include Nick Frost as a simple-minded seal, Aziz Ansari as a very energized bunny and “The Big Bang Theory”‘s Kunal Nayyar as a badger whose black and white pelt has a skull-and-crossbones pattern.

The comedy ranges from kid-friendly slapstick to clever sarcasm. Referring to the previous movie in the franchise, Sid the sloth notes that “we fought dinosaurs in the ice age — it didn’t make any sense, but it sure was exciting!”

The 3D version of the movie is sharp and bright, with imaginative elements such as huge pirate galleons made of ice and alluring ocean sirens that turn out to be frighteningly fishy fiends. A hurricane at sea, massive mountains rising from the earth and a brief flight above the clouds are beautifully rendered.

The nearly dialog-free intervals featuring Scrat the acorn-seeker are the movie’s most purely enjoyable visual moments. Directors Steve Martino and Michael Thurmeier make it impossible not to root for the desperately determined loser and his hilariously pitiful predicaments. A wonderfully preposterous payoff for his efforts closes the film.

The movie is preceded by “The Longest Daycare,” a fast-paced and very 3D cartoon starring baby Maggie from “The Simpsons.” At the Ayn Rand School for Tots (previously seen in the TV series episode “A Streetcar Named Marge”), Maggie must overcome a bully to save a butterfly. Best throwaway gag: the wall poster announcing that “Honest Bunny Says You Have No Future.”