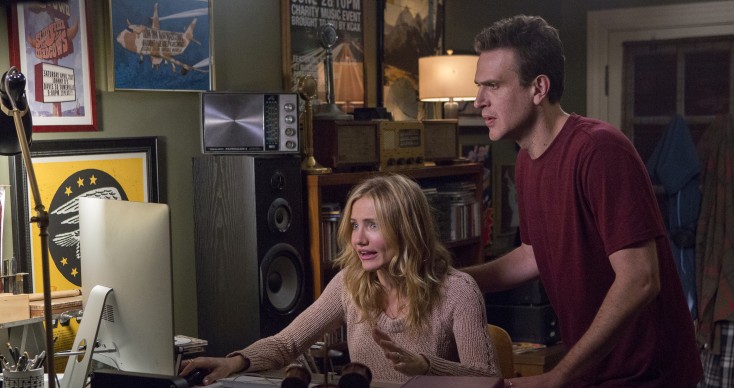 Despite some enjoyable chemistry between them in director Jake Kasdan’s former semi-raunchy romp “Bad Teacher,” Cameron Diaz and Jason Segel have trouble keeping it up throughout “Sex Tape,” a rom-com film falling victim to a one-joke storyline that can’t sustain its running time.

Diaz plays Annie, a housewife “mommy blogger” who runs a popular site containing tidbits about her kids and marriage. Segel is her hubby Jay who is, uh, in the music business in some capacity. Their once ultra-hot sex life has gone into deep freeze due to having kids and a time crunch. To get it back, they make an iPad sex “tape” enacting all of the positions pictured in the classic “The Joy of Sex” book. When Jay “forgets” to erase the three-hour marathon session, he also unknowingly sends it, via a syncing app, to all the people he’s ever given a free iPad to. For contrived plot reasons, he keeps getting new ones and gives the old ones to friends and family as gifts.

Annie’s blog is about to be purchased for big money (yeah, sure it is) by a family-oriented company headed by CEO Hank Rosenbaum (Rob Lowe) and, of course, Annie gifted him one of the free iPads. In a silly, all-night quest to get their hands on all of the iPads before key people might get off on the wild video, Annie and Jay run all over town, at one point, taking their young kids with them. Finally, just before the sex session goes viral, they succeed.

Granted, there might be a place for a comedy in which the all-invasive modern technology we all enjoy bites us in the butt, but a sex “tape” that might ruin your life? Sure, you might not want your mom or dad checking out your most personal secrets, but in our bare all society, is this really such a giant deal? Maybe when the Internet first got rolling, but in 2014? Not so much.

Not only do Segel and Diaz seem more like drinking buddies than lovers but talented supporting players, usually good for some great one-liners, do their best with lesser material provided in the script by Nicholas Stoller and Kate Angelo (“The Back-Up Plan”). The usually hilarious Rob Corddry and reliable Ellie Kemper play the couple’s best friends who should be good for many comedic moments but have little to work with. Rob Lowe, maybe spoofing his own 1980’s sex tape scandal, does successfully provide a few needed laughs as a twisted rep for the company thinking of buying Annie’s blog. His distinguishing characteristic seems to be that he’s a Disney-mad “player” with bad portraits of himself as classic Disney characters all over his home.

There is also something more sick than funny about a best friend (Corddry’s character) drooling over his best bud’s wife after seeing her naked and in bizarre sex positions. And to include a pre-teen blackmailer whose language is bluer than all the adults’ around him is also a bit tummy churning.

Will the basic premise of “Sex Tape” ring true with once frisky couples whose love life has suffered after having kids? Sure, but that is the only story development that rings true in this lackluster grope fest.

Tags:Cameron Diaz, Jake Kasdan, Jason Segel, Rob Corddry, Sex Tape
Previous PostFrank Grillo is a Man on a Mission in ‘Purge’ Sequel
Next Post‘Sex Tape’ Suffers From Too Many Gaps in the Humor – 3 Photos