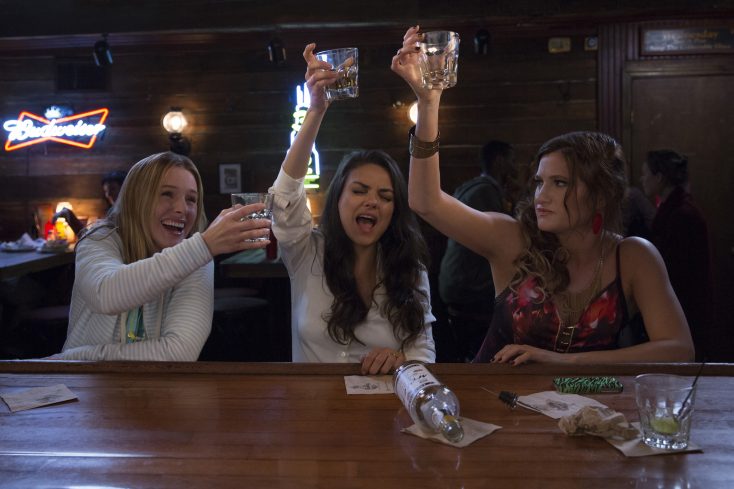 When a movie is written and directed by the writing team behind “The Hangover” (Jon Lucas and Scott Moore), it’s only natural to expect the same laugh-a-minute craziness the hit 2009 comedy is known for. While STX Entertainment’s “Bad Moms” comes up a little short on laughs, it surprisingly has a whole lot of heart to win over audience members of both sexes.

The film follows overworked and underappreciated mom Amy (Mila Kunis), who like most moms these days, just has too much on her plate. Between taking care of her two kids (Oona Laurence and Emjay Anthony) and trying to have a career, there’s barely any time for Amy to get to things like a PTA meeting on time, let alone work on her marriage. When she catches her husband (“About a Boy’s” David Walton) having an affair online, Amy finally snaps and decides to put herself first for once—much to the disgust of perfect parent Gwendolyn (Christina Applegate), who is mortified by Amy’s new “bad mom” behavior.

When Amy ignores Gwendolyn’s list of do’s and don’ts for the school bake sale and brings pre-packed donut holes to the event instead, Gwendolyn uses her power as the head of the PTA to have Amy’s daughter benched from all future soccer games. Sick of Gwendolyn’s constant bullying, Amy decides to run against her at the upcoming PTA election so she can get her daughter back on the playing field. Joined by frazzled stay-at-home mom Kiki (Kristen Bell) and sailor-mouthed single mom Carla (Kathryn Hahn), Amy sets out to prove that sometimes the best mom for a job is a bad mom who just needs a little time to herself to truly be the best she can be.

While the story is a bit cliché, “Bad Moms’” talented cast manages to keep audiences glued to their seats waiting to see what will happen next. Kunis, as always, is a joy to watch, and plays Amy so perfectly that every woman in the audience will be able to relate to her whether they’re a mom or not. Bell is adorable as Kiki and Hahn is hilarious as Carla, although she doesn’t quite hit the comedy highs she did opposite John C. Reilly in “Step Brothers.”

The true star of the film, however, is Applegate as queen bee Gwendolyn. It’s always great to see Applegate play the antagonist—a role she clearly relishes here—and viewers will love to hate her character. We’ve all had a Gwendolyn in our lives before, which makes it all the more easy to cheer on Amy as she goes up against her seemingly perfect adversary.

Given the talented cast and crew, though, one can’t help but feel slightly disappointed that “Bad Moms” isn’t as over the top as it could have been. Granted if the writers let Amy go too wild, it might have been hard to sympathize with her, but the movie is called “Bad Moms”—a wild run through the grocery store at night or buying Arby’s for the kids’ lunch is hardly all that scandalous. Kunis, Bell and even loose cannon Hahn seem a bit restrained throughout the film, which is sad considering all audiences want is to see them run free.

Jada Pinkett Smith as Gwendolyn’s right-hand woman, Stacy, also seems like a missed opportunity. Her character is barely given any screen time and is often upstaged by Gwendolyn’s lackey, Vicky (“Bridesmaids’” Annie Mumolo), in the few scenes she is in. Even though Stacy may be a throwaway character, casting a big name like Pinkett Smith seems like a waste if the character is never going to get a chance to shine.

Probably the best part of “Bad Moms” comes at the end, when the cast sits down with their real-life mothers to reminisce about all the “bad mom” things they lived through. It’s interesting to see which stars look just like their moms (Hahn) and which ones don’t (Kunis). Applegate once again steals the show, though, as she recalls the time her mother took her to see Al Pacino in “Cruising” when she was just a kid—a film about a police detective who goes undercover in the underground S&M gay subculture of New York City to catch a serial killer preying on gay men. Applegate’s mom just shrugs the whole thing off: “It was Al Pacino!” she says as she hilariously defends her actions.

In the end, every parent will leave “Bad Moms” feeling a little less guilty for ever feeling like a bad mom (or dad) themselves. Kunis, Bell and even Hahn make it clear that no parent ever really knows what they’re doing—and that’s okay so long as everyone is trying their best. The only way to do that, however, is to take care of yourself from time to time, too. Viewers might not leave the theater with tears in their eyes from laughing so hard, but the sweet, easily relatable sentiment may cause a few eyes in the house to well up with tears nonetheless.