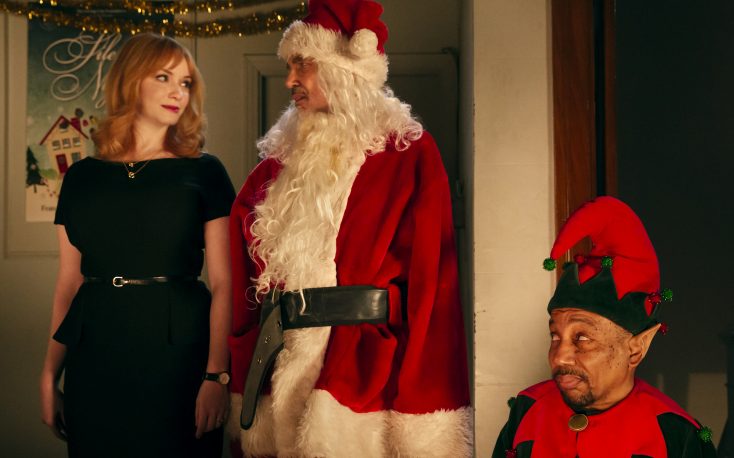 As far as dark comedies go, 2003’s “Bad Santa” is arguably one of Hollywood’s best. Sadly, it took 13 long years for the film’s sequel to hit theaters. Luckily, fans of “Bad Santa 2” don’t have to wait until the 2017 holiday season to bring the movie home, as the vulgar Christmas comedy is now available to own on DVD (MSRP: $32.99) and Blu-ray (MSRP: $38.99) from Broad Green Pictures and Miramax.

The film reunites “Bad Santa’s” three leading men—drunken conman Willie Soke (Billy Bob Thornton); his angry sidekick, Marcus Skidmore (Tony Cox); and the lovable, naive Thurman Merman (Brett Kelly)—as Willie and Marcus begrudgingly team up once again to knock off a charity in Chicago on Christmas Eve. Understandably, Willie isn’t very trusting of Marcus since Marcus did try to kill him once, but Marcus (who was released early from prison due to overcrowding issues—let Willie’s wisecracks commence) swears his double-crossing nature is in the past and that their payday will be worth millions.

When Willie and Marcus get to Chicago, however, Willie discovers that the insider who tipped off Marcus about the holiday heist is his estranged mother, Sunny (Kathy Bates), who is working undercover at the Salvation Army-like charity to scout it out. Now, Willie is forced to work with not one, but two people he doesn’t trust—and is back to wearing that dreaded Santa suit to collect money for the charity he’s about to rob.

For a movie that begins with the lead character trying to commit suicide, “Bad Santa 2” is surprisingly much less dark than its predecessor. Not only is the comedy almost nonstop, but the now grown-up man-boy Thurman Merman adds a lot of heart to the film once he shows up in Chicago clad in his Hungry Hoagies T-shirt and khaki shorts to spend Christmas with Willie. Audiences will truly feel Willie’s internal struggle over whether to knock off the charity as planned with two people he hates or to throw millions of dollars away for the one person who really does care about him once Thurman informs him that he’s going to be singing at the charity’s annual Christmas Eve concert and invites him to the performance—which, of course, is when Willie is supposed to be breaking into the charity’s safe.

Bates adds a lot to the film as well as Willie’s tough-as-nails, tattooed mother Sunny, though Thornton and Cox still manage to get the bulk of the best lines in the film with their back-and-forth insults. Not surprisingly, the comedy team of Thornton, Cox and Bates coupled with the scene-stealing, wide-eyed performance by Kelly doesn’t really give anyone else a lot of screen time to shine, so poor Christina Hendricks is easily forgettable as Diane, the charity director with a heart of gold and a libido of steel who is drawn to Thornton’s sleazy character.

The Blu-ray release of “Bad Santa 2” not only includes the theatrical version of the movie, but also an unrated version that runs a whopping three minutes longer. For the most part, the differences between the two cuts of the film aren’t all that noticeable, minus the extended SantaCon scene at the end of the unrated version where two girls flash Willie while he’s looking for his mother.

Additionally, both the Blu-ray and DVD include an alternate opening and alternate ending as well as four deleted scenes. The alternate opening isn’t really all that different from what’s in the theatrical release version and just adds some extra dialogue to the scene where Willie is working in the convenience store after a man in an electric wheelchair asks him where he can find some sanitary napkins. The alternate ending isn’t that much different either, although it does cut the film’s final scene with Willie visiting the hospital and replaces it with a prostitute propositioning Willie in an alleyway. There’s also a brief comical scene added that shows Bates’ character after the bust.

The deleted scenes give fans a bit more to enjoy, or at least two of them do. There’s a great scene involving Bates and Cox’s characters getting into a fight and a hilarious scene where a little girl asks Willie while he’s dressed up like Santa Claus for a penis for Christmas to complete her transition.

A four-minute gag reel is included on both releases as well, which plays more like a Line-O-Rama reel of alternate, improvised jokes than anything else. Given the context of the film and the cast’s chemistry together, it seems like more laughs were had on set than showcased here.

Two brief behind-the-scenes featurettes are also included on the Blu-ray and DVD. “Thurman Then & Now” focuses primarily on Brett Kelly’s return as Thurman Merman and features clips of him as a child in the original “Bad Santa.” The two-minute extra not only discusses how Kelly had to gain 50 pounds and dye his hair to play the part again, but also how the film was made to please fans of the original movie—and if it made any new fans in the process, then that was fine with the cast and crew. Probably the best part of the featurette, minus seeing how Kelly looked before his weight gain, is hearing Billy Bob Thornton talk about what a classic the original “Bad Santa” has become and how people tend to “watch the box set” of “It’s a Wonderful Life,” “Miracle on 34th Street” and “Bad Santa” every holiday season.

“Just Your Average Red Band Featurette” is an uncensored look at the “******* hell hole” (as Kelly puts it) that was the “Bad Santa 2” set. Featuring interviews with the cast, viewers will learn during the two-minute extra that the first thing Christina Hendricks filmed for the movie was the sex scene with Thornton in the Christmas tree lot (“It’s a great way to break the ice, I highly recommend it,” she jokes) and that Kathy Bates wasn’t at all bothered by the language in the film as she “swears like a sailor.”

Exclusive to the Blu-ray release is the entertaining “That’s My Willie,” an original animated series that shares some memorable moments from Thurman and Willie’s unique friendship. Narrated by Kelly, the animated shorts cover such momentous occasions in Thurman’s life as the time Willie gave him a fake ID and took him to a strip club and the time Willie taught a then 12-year-old Thurman how to drive.

“Jingle Balls,” available on both the Blu-ray and DVD, runs less than a minute in length and features explicit clips from the movie while an alternate version of “Jingle Bells” plays in the background. Although promoted as an adult version of the classic holiday song, the many F-bombs and other vulgar words that replace the lyrics don’t quite sync up correctly, making this a featurette that can easily be skipped.

Wrapping up the extras on both releases are two red band trailers for the film and four entertaining TV spots, including one that plays like a commercial for “The Walking Dead” and another that plays like a campaign commercial, asking viewers to “Make America Bad Again.”

One glaring omission from the special features is a commentary track with the cast and crew, which is a real shame since none of the extras really delve all too deeply into the making of the film or what it was like to get Thornton, Cox and Kelly back together after all these years.

Fluffy features aside, while the script by first-time feature film screenwriter Johnny Rosenthal and Shauna Cross (“If I Stay,” “What to Expect When You’re Expecting”) and directed by Mark Waters (“Mean Girls”) may be entertaining from start to finish, “Bad Santa 2” still doesn’t quite live up to its predecessor. There’s no “wooden pickle” moment audiences will really take away from the film and laugh about a decade later, and there’s one characteristic of Bates’ character that doesn’t really go anywhere during the movie—although it’s referenced repeatedly throughout. Nevertheless, the film manages to be one of Hollywood’s stronger sequels and is sure to please longtime “Bad Santa” fans. Granted at times “Bad Santa 2” seems like a more watered down version of “Bad Santa”—especially with Willie’s growing conscious throughout the film—but the vulgar holiday sequel is still a whole lot of fun and a worthy addition to any comedy fan’s holiday home video collection.

The holiday season may be over, but Front Row Features is still in the generous spirt. That’s why we’re giving away a copy of “Bad Santa 2” on Blu-ray to three lucky readers. To enter the contest, simply email socalmovieeditor@aol.com by Tuesday Feb. 28 for your chance to win. Good luck!