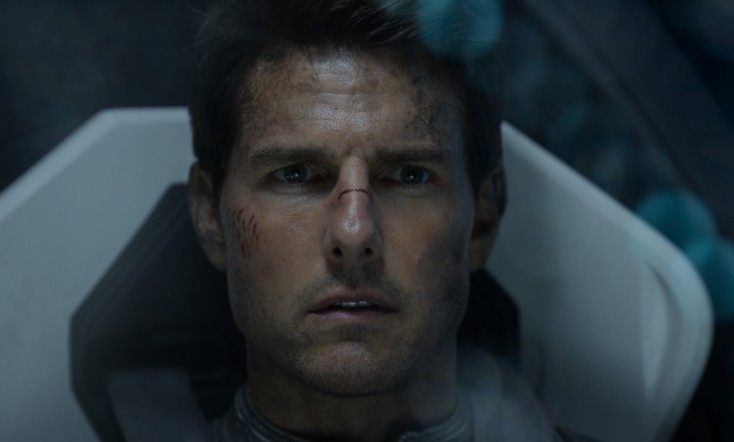 “Oblivion,” the second film by “TRON: Legacy” director Joseph Kosinski, offers a stylishly imaginative mix of science-fiction action, psychological suspense and grown-up romance. The plot has a few holes, and the movie’s robotic drones suffer too frequently from “can’t hit the side of a barn” syndrome when the screenplay demands, but there is more here to like than to nitpick.

Most of Earth is an abandoned post-invasion wasteland in 2077, after earthquakes, tsunamis and alien attacks have left half of the Brooklyn Bridge and all but the observation deck of the Empire State Building buried. High-tech drone engineer Jack Harper (Tom Cruise) is in charge of making sure enemy scavengers don’t sabotage ocean-based fusion reactors that supply fuel to surviving off-world humans.

Although he is good at his work, gets to fly a carnival-ride-cool “bubbleship” and lives in a stunning above-the-clouds home with a loving redhead named Victoria (Andrea Riseborough), Jack is haunted by what seem to be recollections of a pre-war life from 60 years earlier. His efforts to uncover the truth about his identity, the real nature of his mission and his relationships with two very different women lead to a clever plot twist that manages to be both hopeful and tragic.

Jack knows from the outset that his memory has been wiped by his military superiors, a mandatory requirement for his job. That gives Cruise full license to portray Jack initially as the kind of confidently competent but not fully human character that Cruise embodies so well. The difference here is that Jack knows something is missing.

Jack struggles with residual memories that make no sense to him as he goes about his daily routine, which includes patrolling the barren desert that the eastern seaboard of America has become. The film’s special effects offer an interesting take on dystopia by limiting the focus to single isolated landmarks at a time in the sandy landscape (a bombed Yankee stadium, a tilted Washington Monument, a cratered Pentagon), instead of filling the screen with ruins. Blasted by aliens, the shattered moon hangs in trailing pieces in the sky.

The most dazzling structure in the movie is Jack and Victoria’s glass-walled, ultra-modern home, which sits perched atop a 3,000-foot spire like something out of “The Jetsons.” When Victoria peels down for a nighttime swim in the house’s clear-bottomed swimming pool that hangs suspended in space, the sight is both sexy and a little spooky.

Complications ensue when Jack rescues Julia (“Quantum of Solace” Bond girl Olga Kurylenko), a survivor of a downed spacecraft who seems to know more than she’s telling. A different set of problems arises when Jack encounters an underground group led by cigar-smoking patriarch Beech (Morgan Freeman), whose version of history is at odds with what Jack has been told.

Cruise is good at making Jack stereotypically heroic yet believably unsettled. Riseborough is excellent as Victoria, whose detached efficiency masks an unspoken desperation. Kurylenko is appropriately earthy as the mysterious Julia, and Freeman plays Beech with his usual air of wised-up and somewhat amused common sense.

Action scenes include a “Star Wars”-esque aerial pursuit through skyscraper canyons and some “Robocop”-like encounters with intimidating gun-mounted robotic drones. The plot also has echoes of “Blade Runner,” “A.I.” and “The Matrix,” without seemingly overly derivative of any of those films.

Compared to Cruise’s previous SF credits, “Oblivion” is less disturbingly paranoid than “Minority Report,” less nightmarishly terrifying than “War of the Worlds” and less pretentiously silly than “Vanilla Sky.” Aside from some cannon-fodder extras, and Melissa Leo as Jack’s video-screen-only supervisor, the movie keeps its focus entirely on its main four-person cast. Combined with some elegantly uncluttered set design and iconic post-apocalyptic locations, this gives “Oblivion” a classic and minimalist simplicity that’s downright refreshing in an era of blockbuster wall-to-wall overkill.