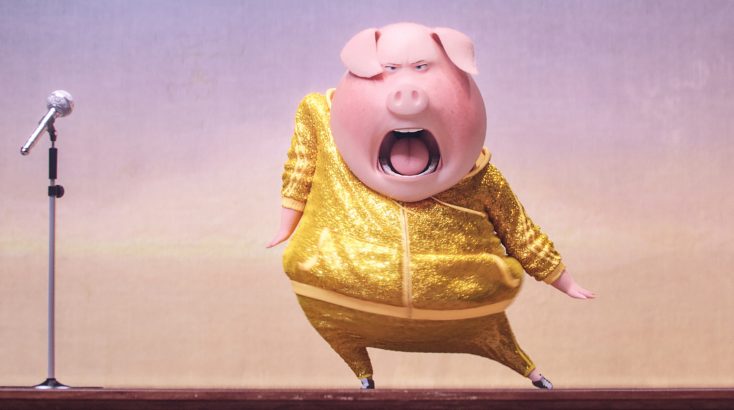 Fans of movies involving singing competitions are in luck. Illumination Entertainment’s adorable animated film, “Sing,” is set to arrive on Blu-ray and DVD.

Though not quite as heartwarming or hilarious as Illumination’s “Despicable Me,” “Sing” still manages to captivate audiences both young and old with its memorable characters and engaging story. The film follows an optimistic koala named Buster Moon (voiced by Matthew McConaughey) who decides to put on a singing competition to help generate interest in his struggling theater. When the audition flyers go out with a small typo on them advertising a huge monetary prize—$100,000 instead of $1,000—Buster finds his theater packed with contestants, but with no money to pay the winner. As they say in show business, however, the show must go on, and soon the competitors become friends as they eventually band together to show off their talents and save Buster Moon from financial ruin.

While the songs in “Sing” are catchy, it’s the diverse cast of characters that truly leaves a lasting impression. Viewers are sure to find someone they’ll relate to, whether it’s the overworked and underappreciated momma pig, Rosita (voiced by Reese Witherspoon), or the young gangster gorilla with a heart of gold, Johnny (voiced by Taron Egerton, “Kingsman: The Secret Service”). The heartwarming film has quite a few laugh-out-loud moments, too, from some of the singing auditions at the start of the movie to Buster’s hilarious car wash scene toward the end of the film.

Both the Blu-ray/DVD Combo Pack with Digital HD (Universal Pictures Home Entertainment, MSRP: $34.98) and DVD release (MSRP: $29.98) of “Sing” come loaded with more than an hour of extras, including three new mini-movies featuring beloved characters from the film. “Gunter Babysits” features everyone’s favorite dancing pig Gunter (voiced by Nick Kroll, “The League”) babysitting Rosita’s 25 little ones; “Love at First Sight” follows Buster’s assistant, the elderly iguana Miss Crawly (voiced by “Sing’s” writer/co-director Garth Jennings), on a series of first dates after Johnny helps her set up an online dating profile; and “Eddie’s Life Coach” finds Buster’s friend Eddie the slacker sheep (voiced by John C. Reilly) going through a digital training seminar after his mother buys him some “earphones of enlightenment” off of a TV infomercial. “Love at First Sight” is the cutest animated short of the bunch, although all three mini-movies are entertaining. Be on the lookout for a great hidden pigs-in-a-blanket joke during “Gunter Babysits.”

Not surprisingly, a making-of documentary on the actual movie itself is also included with the Blu-ray and DVD releases. Clocking in at just under five minutes, “The Making of ‘Sing’” looks at how Meledandri always wanted to make a music-driven film and touches briefly upon the look of the movie (it’s a mixture of San Francisco, Los Angeles and Miami) and its story. Viewers will also see footage of McConaughey, Kroll and singer Tori Kelly (who voices the elephant Meena in the film) recording some of their dialogue in a recording studio.

“Finding the Rhythm: Editing ‘Sing’” examines how the movie was edited. Hosted by “Sing’s” editor, Gregory Perler (“Despicable Me”), viewers will learn that editing a film is less about cutting things out of it and more about choosing what to put in. Perler also discusses how longer takes create more drama than quick takes and talks about one scene that didn’t make the final cut of the film because the dialogue-driven scene didn’t work well with the pacing of the end of the movie.

Six character profiles (Matthew McConaughey as Buster Moon, Reese Witherspoon as Rosita, Tori Kelly as Meena, Taron Egerton as Johnny, Nick Kroll as Gunter and Garth Jennings as Miss Crawly) are also included among the bonus features featuring interviews with the actors who voice each character. Guests will hear how McConaughey wanted to do voice over work for years before finally being offered the role of Buster Moon; how Witherspoon could relate to Rosita being a mom who still has dreams and desires (the mom of three even jokes how sometimes she feels like she has 25 kids); and how Egerton cried all five times he saw the finished film because of the relationship between Johnny and his dad. Probably the most interesting interview, however, is hearing Jennings discuss how a grown man became the voice of an elderly female iguana.

Given that “Sing” is a music-driven comedy, it should come as no surprise that there are several music video-themed extras included on the DVD and Blu-ray releases as well. In addition to the actual music videos for Tori Kelly’s “Don’t You Worry ’bout a Thing” and Stevie Wonder and Ariana Grande’s “Faith,” there are lyric videos for “Faith” and Scarlett Johansson (who voices Ash, the punk rock porcupine)’s “Set It All Free” where the lyrics to each song are printed onscreen for viewers to sing along to as animated clips from the movie play behind them. There’s also a quick making-of featurette on the set of the music video for Tori Kelly’s “Don’t You Worry ’bout a Thing.” Although the music video itself is pretty basic, the extra is interesting, as it talks about how the look of the video was inspired by street art and how the song is a cover of a Stevie Wonder classic (for youngsters watching at home who might not know). There’s also a “‘Sing’ & Dance! – ‘Faith’” featurette where viewers can learn some dance moves that go along with the lyrics of the song. Although the moves are broken up into the three sections to make it easier for viewers to learn them, it will take repeat viewings for viewers to remember all of the fancy footwork.

“The ‘Sing’ Network” is comprised of four TV commercials advertising various business endeavors from four of the film’s stars, “Gunter’s Dance Studio,” “The Moon Theater,” “Rosita’s Babysitting Gizmo” and “Miss Crawly’s Matchmaking Service,” as well as quick “In the News” character profiles promoting the “true stories behind the biggest acts in entertainment.” Viewers almost expect a phone number to appear onscreen to call in to vote for their favorite contestants while watching the brief biographical clips. Characters who get their own promotional “Behind the Music”-type video include Buster Moon, Gunter, Rosita, Johnny, Meena, Ash and Mike (the mouse voiced by Seth MacFarlane).

Wrapping up the extras is a minute-long “Best of Gunter” reel that showcases some of Gunter’s most memorable moments from the film.

While the extras are enjoyable, it would have been nice to have heard more from the film’s all-star cast about their experience making the movie, particularly Johansson, Reilly and MacFarlane who are sadly nowhere to be found among any of the bonus features.

For the most part, though, “Sing” hits all the right notes with audiences, especially DVD owners since they are often shortchanged on bonus materials. The film is cute, funny and filled with catchy music, guaranteeing repeat viewings for viewers of all ages. It may not have been the best animated feature film of 2016, but it still continues Illumination’s impressive streak of must-own movies the whole family can enjoy watching together.

Front Row Features is giving away a copy of “Sing” on Blu-ray/DVD Combo Pack to three lucky readers. To enter the contest, simply email socalmovieeditor@aol.com by Tuesday March 28 for your chance to win. Good luck!