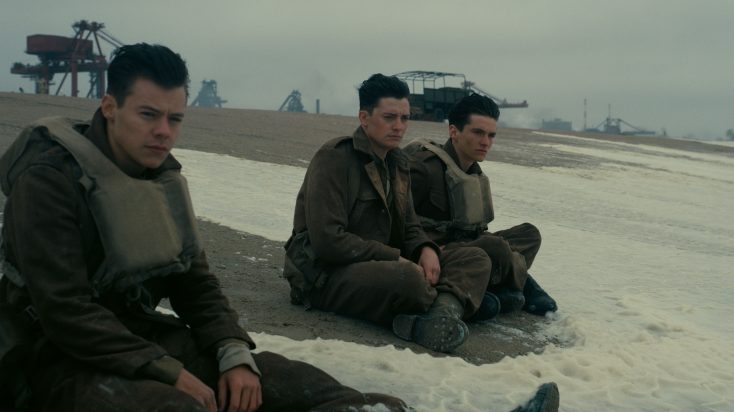 More of an IMAX-spectacular technical feat than a traditional movie, “Dunkirk” plays like an assemblage of elaborate second-unit footage for a film that should have included more story for those scenes to enhance. Most of the admittedly impressive land, sea and air coverage is presented in an almost documentary style that makes it hard to differentiate between many nameless characters. “Dunkirk” is the equivalent of a silent movie with musical accompaniment that could have dispensed with even the very little dialog it bothers to include, because Hans Zimmer’s relentlessly ticking and throbbing score is more important than anything anyone says when it comes to giving scenes a meaningful emotional context.

Director/writer Christopher Nolan, whose “Dark Knight” Batman trilogy proved that bleak can equal big box-office, uses an interesting structure to tell this thin tale, which is based on the 1940 evacuation of 300,000 mostly British troops hemmed in by Nazi forces in World War II. The movie’s three interwoven narratives span different amounts of time: a week for the under-fire soldiers awaiting evacuation from the beach in France, a day for one of the privately owned “little boats” dispatched from the British coast to help rescue them, and an hour for three Royal Air Force planes headed over the channel for air support.

Mark Rylance gives a stoic performance as a calmly stalwart British citizen who sets out for Dunkirk with his son and another boy on their small boat despite the obvious danger of heading into a war zone. Tom Hardy is a coolly professional pilot whose flight across the channel is made more difficult by his Spitfire’s broken fuel gauge. Fionn Whitehead is a stranded private whose often dishonorable-at-best attempts to get off the beach and make it home to England are repeatedly thwarted by bullets and bombs.

Strangely, the movie never shows a single German (no cutaways to Hitler, sorry), and doesn’t provide any explanation for why Nazi forces didn’t make more of an effort to wipe out the huge number of all but defenseless sitting-duck Allies who were stranded on Dunkirk beach for days. Also, all of the movie’s characters are fictional, even Kenneth Branagh’s noble Commander Bolton, who valiantly waits with his men at Dunkirk. Creating Bolton out of whole cloth seems insultingly disrespectful in a movie dealing with a historical incident, but that’s Hollywood for you. Also, pop star Harry Styles appears as one of the interchangeable British soldiers who may as well be considered crowd-scene extras.

Visually awe-inspiring yet somehow not terribly moving, “Dunkirk” is like a two-hour trailer for a movie that could have used more meat for the grinder.

‘Expired,’ ‘The Great,’ ‘The King’s Daughter,’ More Available This Week on Home Entertainment