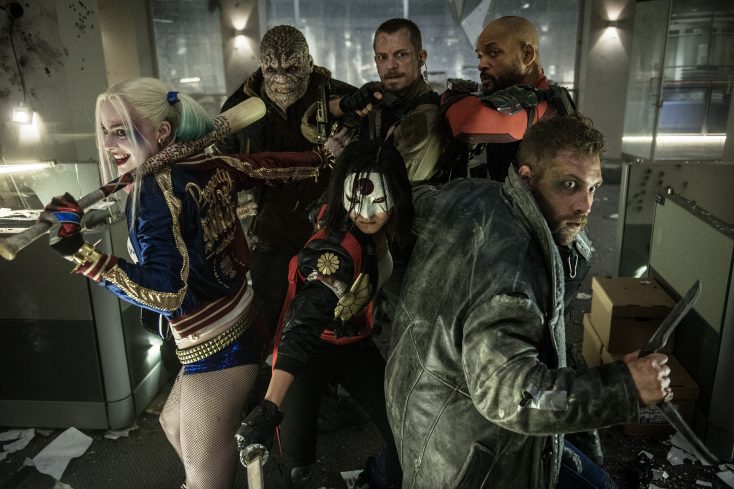 One of the year’s most highly anticipated films, Warner Bros.’ “Suicide Squad” is finally in theaters. Picking up after the downright dreadful “Batman v Superman: Dawn of Justice,” writer-director David Ayer’s (“Fury”) DC Comics adaptation follows a group of prisoners—the worst of the worst, if you will—as they execute a dangerous black ops mission for a secret government agency in exchange for clemency. Led by world’s most lethal assassin, Deadshot (Will Smith), the motley group of “heroes” includes the long-awaited feature film debut of Harley Quinn (Margot Robbie), a former psychiatrist who is now just plain psycho, having fallen crazy in love—literally—with the Joker (played here by Jared Leto).

While it should come as no surprise that “Suicide Squad” trumps “Batman v Superman” in every way possible, an uninteresting villain and a fast pace that quickly fizzles out in the final act prevent the film from ever reaching its true potential. Not that “Suicide Squad” isn’t a blast to watch for the most part. Its charismatic cast of characters will have audiences eagerly awaiting their next assignment, way more so than DC’s upcoming “Justice League” movie, which is further set up here with a post-credits scene involving Batman (Ben Affleck) and the leader of the secret government agency that assembles the deadly Suicide Squad, Amanda Waller (Viola Davis).

Ayer, for the most part, crafts fairly complex characters who aren’t just personifications of evil—these bad guys actually have heart. In fact, one member of the squad, the quiet El Diablo (Jay Hernandez), doesn’t even want to use his superhero powers anymore for fear of losing control of them again like he has in the past. Smith’s Deadshot is only behind bars because he couldn’t kill Batman in front of his daughter (Shailyn Pierre-Dixon), who tearfully pleaded with him not to kill Gotham’s Dark Knight even though it meant surrendering himself to the police instead. Then there’s Harley, who wants nothing more than to be reunited with her “Puddin.’” Her only crime—well, before going on a mass killing spree with the Joker—was falling in love with a madman and wanting to live happily ever after.

Each villain’s weakness makes it easy for audiences to sympathize with them and cheer them on to victory. Some characters, though, it’s arguably a bit too easy to root for, particularly Deadshot. It’s hard to understand why he’s behind bars in this crazy comic book world when there are so many vigilantes out on the streets being praised for similar actions. It seems like Deadshot only takes out bad guys himself—he even says he never targets women or children—so it never really feels like he’s the bad guy he’s made out to be. Although Deadshot is one of the more fleshed out characters in the film, it still feels like there’s a part of his backstory that’s missing for audiences to truly fear the expert marksman.

Nevertheless, Smith is a joy to watch on-screen as Deadshot, although it goes without saying that Robbie is “Suicide Squad’s” breakout star. It may have taken a while for Harley Quinn to make her big-screen debut, but the wait was well worth it thanks to Robbie’s scene-stealing performance. Audiences won’t be able to get enough of Harley and, even though their relationship is totally twisted, will want to see her reunited with the Joker since that’s all the crazy, bat-wielding romantic really wants.

A lot has been said about Leto taking over Heath Ledger’s Academy Award-winning role, but the fellow Academy Award winner (“Dallas Buyers Club”) plays the part so over the top that it’s hard to imagine Ledger even in “Suicide Squad” as the Joker. Leto chews the scenery with zeal every chance he gets, which sadly isn’t that often. Truth be told, most of Leto’s scenes have already been shown in “Suicide Squad’s” trailers, which is a bit disappointing considering the chemistry he and Robbie share on-screen. While it’s understandable that he’s not in the film a lot considering this isn’t the Joker’s movie (his sole purpose, really, is tell Harley’s origin story in flashbacks and to try to break her out of prison), viewers can’t help but want to see more of Leto on-screen because, well, he’s the Joker!

Having a beloved villain in the film like the Joker and not really using him much seems like even more of a crime considering “Suicide Squad’s” real villain, the goth-like sorceress Enchantress (Cara Delevingne). Audiences truly couldn’t care less about the unstoppable blob-like zombie army she and her brother Incubus (Alain Chanoine) are trying to create to overthrow mankind, let alone the romance between the archeologist whose body Enchantress has taken over, Dr. June Moone, and Col. Rick Flag (Joel Kinnaman), the man tasked with keeping the Suicide Squad members in line. “Suicide Squad’s” biggest fault is this thrown-together storyline that not only feels cliché (how many times have we seen a giant, destructive energy field spiraling into space now?), but it is ultimately uninteresting. If our heroes are going on a suicide mission to save the world, at least they could have an exciting adversary worth risking their lives over.

For those wondering if “Suicide Squad” is worth seeing in 3-D or IMAX, save yourself a few bucks and just opt for the standard showing instead. You won’t be missing much, and you could use the money you save toward splurging on the must-own soundtrack instead, which features such catchy tracks as Twenty One Pilots’ “Heathens,” Panic! At The Disco’s take on “Bohemian Rhapsody” and Eminem’s classic “Without Me.”

While there’s no doubt “Suicide Squad” could have been much better written, it’s definitely the most enjoyable film to come out of Warner Bros. and DC Films’ DC Extended Universe thus far and has the potential of being the most exciting crime-fighting team assembled on the big screen since, well, The Avengers. Its ending holds a lot of promise as well, however predictable it might be. Sure, “Suicide Squad” is far from killer entertainment, but it isn’t dead on arrival, either.