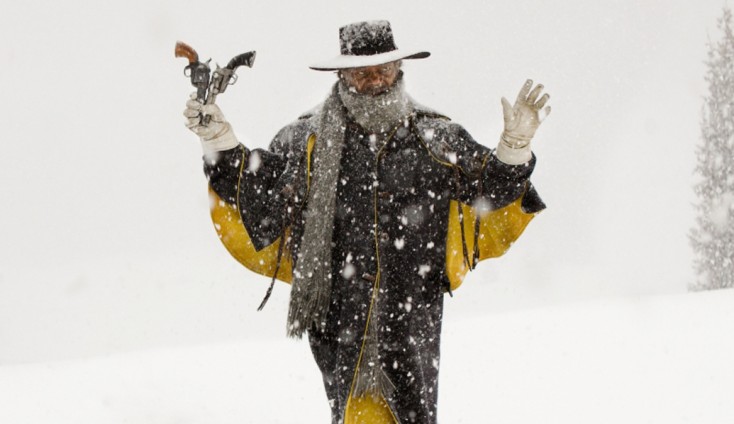 The oddest thing about director/writer Quentin Tarantino’s wild and wicked new western “The Hateful Eight” is how unnecessary all of its lily-gilding aspects are. It’s a dialog-driven, amusingly tongue-in-cheek and sometimes incredibly violent exercise that would be just as enjoyable without any of the technical excesses of the epic it clearly isn’t.

Avowed film (as opposed to digital) buff Tarantino shot the movie in the decades-bygone “Ultra Panavision” 70mm format, but that super-widescreen presentation actually works against the story’s mostly cabin-bound claustrophobia. Instead of offering an IMAX-style immersive viewing experience, “The Hateful Eight” ironically appears smaller than a typical movie. That’s because so much space at the top and bottom of the screen is left unused in order to accommodate the hyper-horizontal Cinerama aspect ratio that it’s like watching a movie through a pair of retro slit-visor sunglasses.

Also, the film will be released in not only a butt-numbing 167-minute wide-release version, but also as a bring-two-sandwiches 187-minute “roadshow experience” that includes an exclusive overture and a 12-minute intermission. Now, don’t get me wrong, I liked this movie a lot—but it’s definitely no “Lawrence of Arabia” or “Gone With the Wind.” Most of the movie takes place in a single room, and the action in the film’s few exterior scenes is very small-scale stuff.

Another example of inessential extravagance: The overture and the rest of the movie’s score are by the legendary Ennio Morricone, whose name Tarantino undoubtedly was thrilled to add to the credits…but it’s not the composer’s best work, or even especially memorable. For what’s otherwise such a smart and saucy western, the overcooked music here is pretty limp spaghetti.

So forget every film-geek enticement for seeing the flick. The real reason to go is simply to watch Tarantino’s shifty and cynical characters play out the sidewinder-sinister plot.

Exuberantly ornery John “The Hangman” Ruth (Kurt Russell, occasionally lapsing into John Wayne speak) and former Civil War Union Army Major Marquis Warren (the always appealing Samuel L. Jackson) are bounty hunters who sense something amiss when they’re forced to wait out a Wyoming blizzard in a remote roadhouse with five strangers. Ruth’s crude and contemptuous prisoner Daisy Domergue (Jennifer Jason Leigh) has a $10,000 bounty on her head, which is enough to make Ruth mighty suspicious of everyone.

Scenery-devouring Walton Goggins nearly steals the show (which is saying a lot with this cast) as Chris Mannix, an entertainingly aggravating hitchhiker who says he’s a soon-to-be sheriff. Bruce Dern is excellent as an ancient ex-Confederate general who crossed paths with Jackson’s Warren during the war. Tim Roth has what’s hard not to think of as the Christoph Waltz role of a smugly superior Englishman. Michael Madsen is a bearishly threatening cowboy whom Ruth describes as not looking like “the comin’ home for Christmas type.” Demian Bechir is a Mexican mystery man of few words.

The usual Tarantino blend of over-the-top outrageousness and midnight-black humor remains intact. A couple of vigorously blood-spewing characters may remind viewers of Monty Python’s projectile-vomiting Mr. Creosote. Warren’s graphic tale of an encounter with an unprepared unfortunate who came hunting for him is viciously hilarious. Ruth’s mistreatment of Daisy is cartoonishly nasty, and what happens when Daisy is shown Warren’s most prized possession is both shockingly unexpected and laugh-out-loud funny.

Tarantino fans who read the leaked version of the movie’s screenplay when it appeared online last year will be pleased to hear that it has been significantly improved by re-arranging events near the end, and with welcome additions concerning a certain piece of correspondence. Added narration over the beginning of the post-intermission scene feels very out of place, however. So does Daisy playing a guitar and singing a folk song, even if her captor’s “Animal House”-like reaction to that performance is priceless.

Channing Tatum’s small but important role late in the film adds a new dimension of nasty savagery to the suspense. The whole bloody mess wraps up with a quiet and beautifully written human moment that caps all of the coarseness, cruelty and carnage with an unexpectedly sweet grace note. Yes, even glorious bastards like these can have a sentimental streak.

The “roadshow” version of “The Hateful Eight” opens in select theaters Dec. 25 in the 70 mm format. The movie goes into wide release in the 35mm and digital formats Jan. 1, 2016.