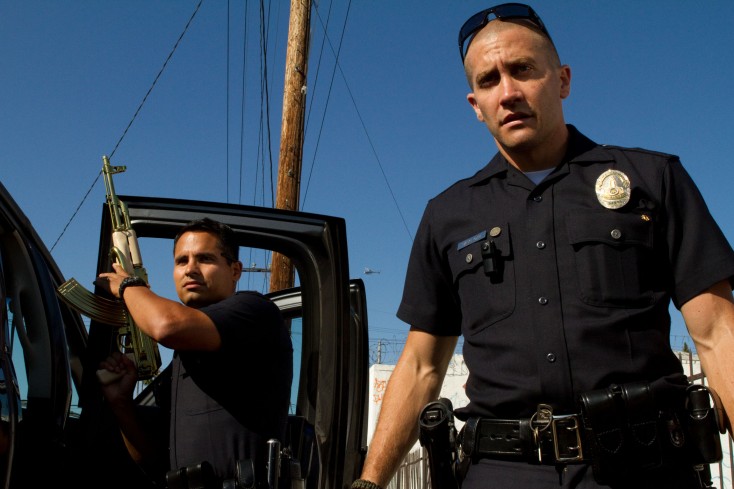 The personal and powerful “End of Watch” is stylish enough to outclass most cops-on-the-beat dramas thanks to its imaginative direction and clever camerawork. But what makes the movie a must-see is the unexpected humanity of its out of the ordinary main characters, whose youthful energy, unjaded enthusiasm and basic decency is genuinely refreshing.

As patrol-car partners policing one of L.A.’s roughest low-income neighborhoods, Jake Gyllenhaal and Michael Peña have a best-friends chemistry that’s completely convincing. Gyllenhaal is likably good-natured Brian Taylor, whose devotion to his job doesn’t keep him from surreptitiously video-recording his daily duties for a filmmaking course. His mischievous refusal to stop even when his exasperated sergeant (Frank Grillo) and others tell him to put away the camera seems entirely in keeping with today’s document-everything, YouTube-centric society.

The movie also includes scenes shot from body cameras, a cruiser’s dash-cam and other video sources, featuring everything from a high-speed car chase that ends in a shootout to locker-room banter back at the station. On the other side of the law, murderous gang members working for a Mexican drug cartel are recording their own exploits, which include a drive-by shooting. The way director/writer David Ayer blends all of those simulated reality bits within the larger narrative sometimes makes “End of Watch” feel like an elaborately deluxe edition of TV’s “Cops,” but that’s not a bad thing.

As Taylor’s behind-the-wheel partner Mike Zavala, Peña is the more settled and emotionally mature of the two. Zavala married his teenage sweetheart a week after their high school prom and has a large extended family. When Taylor begins getting serious about new girlfriend Janet (a kittenish Anna Kendrick), Zavala dispenses sage advice from his Mexican grandmother about whether he should pop the question. That kind of heart-to-heart guy-talk can be the death of bro-mances that try too hard, but the dialog here feels natural even during the most potentially cloying moments.

Ayer, whose writing credits include cops-and-renegades screenplays for “Training Day,” “Dark Blue” and “The Fast and the Furious,” has come a long way since his last directing job: James Ellroy’s laughably hard-boiled 2008 “Street Kings.” Then again, maybe nobody could have done much with a movie that tried to pass off Keanu Reeves as a racist vigilante rogue cop who beats info out of perps with a phone book. In “End of Watch,” Ayer is skilled enough behind the camera to make every aspect of Taylor and Zavala’s lives seem real. Terrifyingly tense patrol scenes alternate with the tedium of paperwork, and horrific unexpected violence contrasts with off-the-job tenderness.

Best of all, the movie doesn’t fall into the genre trap of relying on a predictably straightforward plot. Focused on doing their jobs and not yet disgusted enough with the world to be bitter, the partners are not even aware that a bust they made has turned them into targets until very late in the game.

And while Taylor and Zavala aren’t above bending a few rules, their transgressions are the result of dedication, curiosity, pride and a desire to make human connections, not the usual police corruption and covert criminality. In one unusual scene, Zavala earns the respect of the menacingly furious Mr. Tre (the excellent Cle Sloan) by not backing down from a challenge to fight the gangbanger hand-to-hand in his apartment. But this isn’t one of those movies where the protagonists turn out to be anti-heroes who confiscate drugs, shoot witnesses or otherwise disgrace the badge. These good guys are actually good, and without being sickeningly phony about it.

Suspenseful, occasionally funny and sometimes emotionally devastating, “End of Watch” is so much better than a typical buddy-cop movie that it could snag several nominations this awards season.