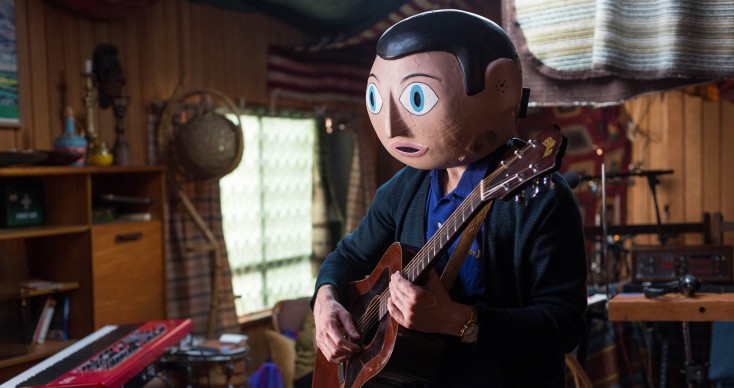 The irresistibly odd “Frank” is an unexpectedly endearing but sometimes dark character study revolving around an eccentric avant garde musician who constantly wears a large and cartoonish artificial head. (It’s Michael Fassbender inside that identity-hiding noggin, obviously showing an impressive level of commitment to the role.) “I have a certificate,” Frank tells those who question his bizarre appearance, which amusingly seems to satisfy authority figures.

Like other offbeat movies this year such as the Kafka-esque “The Double,” the absurdly surreal “Mood Indigo” and the metaphorical fantasy fable “Snowpiercer,” this unpredictable treasure is a refreshing alternative to safely conventional mass-appeal movies that seem neither original nor inspired. Whether you like it or it leaves you scratching your own head, “Frank” is a film you definitely won’t forget.

Jon (Domhnall Gleeson) is the movie’s average-bloke viewpoint character, a young would-be songwriter who still lives with his parents. Enlisted to join Frank’s utterly unknown band Soronprfbs (a name no one can pronounce) because he happens to be standing nearby when the group’s previous keyboard player tries drowning himself, Jon travels with the remaining members to a remote cabin by a lake. What he thought would be nothing more than a weekend gig turns into months of rehearsing the very demanding Frank’s compositions for 14 hours a day while facing resentment from robotic drummer Nana (Carla Azar), surly French bassist Baraque (Francois Civil) and contemptuously dismissive singer, shrieker, stabber and synthesizer player Clara (Maggie Gyllenhaal).

Jon’s only seeming allies are the charismatic yet deadpan Frank (who helpfully describes the facial expressions he’s making inside his fake head as he talks, in order to prevent misunderstandings) and the group’s former mental patient manager Don (Scoot McNairy).

Although the rest of Frank’s band seems comfortably resigned to art-for-art’s-sake obscurity, Jon hopes to social-media the group into at least a cult level of popularity. The others resentfully go along when Frank is unexpectedly seduced by the idea, but Jon’s ambitions threaten to upset the group’s delicate balance of outsider inspiration and actual madness.

Gleeson pulls off the difficult task of embodying Jon’s nice-guy persona that masks his self delusion and an oblivious form of selfishness. Gyllenhaal’s dour and domineering Clara is Jon’s nasty antithesis, with a perpetually pessimistic attitude that even a session of hot-tub hate sex can’t alleviate.

It’s Fassbender who fascinates, though. With his head completely hidden, his role mostly is the equivalent of a voiceover performance. But he’s able to convey so much child-like enthusiasm, wry humor, fear, sorrow and regret with his voice and body that we don’t need to see Frank’s face to know and care about him.

Directed by Lenny Abrahamson and written by Jon Ronson and Peter Straughan, the movie is based on Ronson’s fictional memoir inspired by comedian Chris Sievey’s Frank Sidebottom persona (who wore a false head nearly identical to that of the movie character), Daniel Johnston and Captain Beefheart. Viewers may also detect similarities to musicians such as David Byrne, Brian Eno, Julee Cruise and Stephin Merritt.