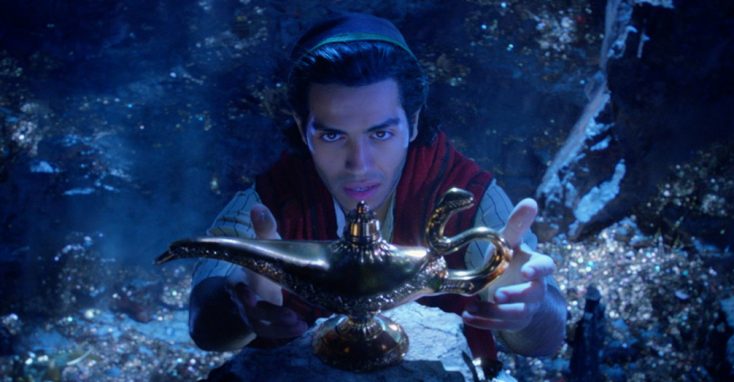 Yet another Disney animated classic gets the live-action/CGI treatment with “Aladdin,” and while the vibrant musical hardly lives up to its predecessor, it still has a decent amount of magic to entertain fans young and old.

Screenwriters John August (“Corpse Bride,” “Frankenweenie”) and Guy Ritchie (“Snatch,” who also directed the film) expand upon the classic animated story while bringing to life all of the iconic moments from the beloved 1992 film like never before. The “street rat” with a heart of gold, Aladdin (Mena Massoud, “Tom Clancy’s Jack Ryan”), falls for the independent Princess Jasmine (Naomi Scott, “Power Rangers”), even though he knows she can only marry a prince. When he comes across a magic lamp, he uses one of his three wishes to become the fictional Prince Ali of Ababwa in hopes of marrying her.

Where the live-action “Aladdin” succeeds is in building up Aladdin and Jasmine’s relationship prior to Genie (Will Smith, “Men in Black”) transforming Aladdin into a prince. Taking a page from the Broadway musical adaptation while simultaneously putting a twist on it, the live-action “Aladdin” has Jasmine and Aladdin escape the marketplace in Agrabah together after Jasmine charitably takes a couple of loafs of bread from a street vendor to feed some hungry children. Jasmine never reveals her true identity to Aladdin, though, pretending to be her handmaiden, Dalia (Nasim Pedrad, “Saturday Night Live”), instead as the two bond over losing their mothers in Aladdin’s secret hideaway (as is often the case in Disney movies, after all).

Even when Aladdin later breaks into the palace to return the bracelet that his monkey Abu stole from Jasmine, she continues the charade. Aladdin only discovers her true identity when the Sultan’s trusted advisor, Jafar (Marwan Kenzari, “Murder on the Orient Express”), uses it to tempt him to retrieve a magic lamp from the Cave of Wonders. Convinced he’s the “Diamond in the Rough” who can enter the cave safely, Jafar promises Aladdin that if he brings him the magic lamp—which Jafar plans to use to overthrow the Sultan (Navid Negahban, “Homeland”) and start a war—Jafar will make him rich enough to truly impress the princess.

Aladdin and Jasmine’s relationship isn’t the only plot point that’s expanded upon in the new “Aladdin,” either. The beloved Genie gets a richer story, which won’t be spoiled here. For the most part, the movie truly takes advantage of its longer runtime (128 minutes versus the animated film’s 90 minutes) by giving each of its three main characters (Aladdin, Genie and especially the headstrong Jasmine) far more depth than any prior adaptation of the story. It also smartly keeps the beloved animal sidekicks from the animated feature, whereas the Broadway musical turned Aladdin and Jasmine’s animal confidants into forgettable human characters. Yes, Jasmine has her handmaiden, but her pet tiger Rajah is still her protector and Dalia ends up serving a greater purpose than just Jasmine’s friend as the story progresses.

While many people voiced their displeasure online with Smith taking on Robin Williams’ legendary role, Smith does a commendable job (as this reviewer expected) being cast as Genie. Granted, sometimes when he’s singing his voice sounds a bit off, but Smith shines brightest whenever he brings his signature sense of humor to the part, just as Williams did before. Whereas Williams stole the show as Genie in the animated “Aladdin,” however, this “Aladdin” belongs to Massoud and Scott, who both command the audience’s attention whenever they are onscreen with their charismatic performances and powerful vocals.

As far as the musical numbers go, while all of the unforgettable songs Alan Menken, Howard Ashman and Tim Rice penned for the animated feature are included, audiences can’t help but feel disappointed by the live-action performances—especially “Friend Like Me.” The new rap version of the song sung by Smith and DJ Khaled that runs during the closing credits of the film is actually far more entertaining than the “dazzling” number performed in the Cave of Wonders. “Prince Ali” fares a bit better, but still seems slightly underwhelming even with 53 purple peacocks and 95 white Persian monkeys, and “A Whole New World” practically flies by in the blink of an eye (no pun intended). Nevertheless, all of the classic songs are far better executed than poor Scott’s sappy new power ballad, “Speechless,” which just isn’t as catchy as any of the original songs and seems forced into the film in hopes of getting a Best Original Song Oscar nomination for Menken and lyricists Benj Pasek and Justin Paul (“Dear Evan Hansen”).

The cinematography by Alan Stewart (“Lab Rats”) is questionable at times, too, particularly at the start of the film. Some of the edits are a bit jarring and look almost cartoonish, though it’s doubtful that was the intent. There are clearly several over-the-top shots that were intended for the 3-D presentations of the film as well, although sadly, the screening this reviewer went to was only in 2-D. The 3-D-looking shots seemed like they could be impressive, though, so try to see “Aladdin” in 3-D if you can.

While “Aladdin” doesn’t come as close to recapturing the magic of its predecessor as 2017’s “Beauty and the Beast” did to its 1991 original, the film still one of Disney’s better recent live-action adaptations. Oddly enough, the movie is at its best when it ventures into new territory. A few missteps aside, audiences should enjoy the whole new world “Aladdin” gives fans of the classic animated tale.