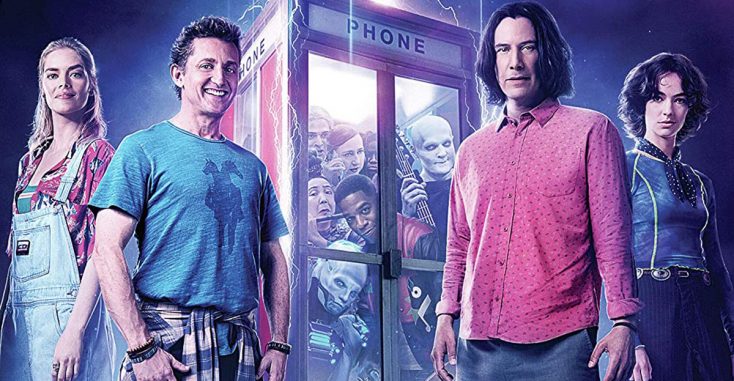 A Rainy Day in New York

Allen has gathered a splendid cast, featuring some of Hollywood’s most promising young stars including Oscar nominee Timothée Chalamet (“Call Me by Your Name,” “Little Women”), Elle Fanning (“The Roads Not Taken,” “The Beguiled”) and Selena Gomez (“The Dead Don’t Die,” “Spring Breakers”).

“A Rainy Day in New York” tells the story of college sweethearts, Gatsby (Chalamet) and Ashleigh (Fanning), whose plans for a romantic weekend together in New York City are dashed as quickly as the sunlight turns into showers. The two are soon parted, and each has a series of chance meetings and comical adventures while on their own. Over the course of a dreamy and drizzly day in New York, Ashleigh discovers she might not be who she thought she was and Gatsby learns that while you only live once, once is enough if you find the right person.

From Metro Goldwyn Mayer’s Orion Pictures, Keanu Reeves (“The Matrix” films, “John Wick” films) and Alex Winter (the “Bill & Ted” films) reprise their roles as the respective title characters and William Sadler (“The Highwaymen,” “The Shawshank Redemption”) reprises his role as the Grim Reaper in “Bill & Ted Face the Music.”

The stakes are higher than ever for the time-traveling exploits of William ‘Bill’ S. Preston Esq. (Winter) and Theodore ‘Ted’ Logan (Reeves). Yet to fulfill their rock and roll destiny, the now middle-aged best friends set out on a new adventure when a visitor from the future warns them that only their song can save life as we know it. Along the way, they will be helped by their daughters, a new batch of historical figures, and a few music legends—to seek the song that will set their world right and bring harmony in the universe.

Just in time for the holidays comes a feel-good family film with a loveable dog, “Charlie’s Christmas Wish,” unwrapping on DVD, Digital and On Demand Tuesday Nov. 10, from Lionsgate. Awarded the Dove Seal of Approval for All Ages, Aiden Turner, Lindsey McKeon, Jay M. Brooks and Diane Ladd star in this heartwarming tale.

In this heartwarming holiday film starring Turner (“Marvel’s Agents of S.H.I.E.L.D.”), a troubled war vet’s family finds new hope from a scrappy little rescue dog. Discharged and sent home for the holidays, John (Turner) tries hard to adapt to civilian life—and to son Jimmy’s new pet, a feisty terrier named Charlie. As the family meets other struggling local veterans, they know it’ll take a miracle to bring peace to them and to John. Good thing Charlie has a direct line to the Man Upstairs

Pauly Shore stars in the outrageously raunchy comedy “Guest House,” moving in on Blu-ray (plus Digital) and DVD Tuesday Nov. 10, from Lionsgate. This film currently is available On Demand.

Hard-partying and out-of-control situations run amok in “Guest House,” a star-studded, who’s who of comedic actors and social-media influencers.

When engaged couple Sarah (Aimee Teegarden) and Blake (Mike Castle) buy their dream home, there’s a catch: a party animal named Randy (Shore) in the guest house who refuses to leave. When Randy throws a wild, sexy pool party, the cops show up, and Blake gets arrested. Can he and Sarah get through their backyard wedding without a certain loser crashing the party— and ruining their marriage? The comedy features Chris Kattan (“Saturday Night Live,” “A Night at the Roxbury”), Bobby Lee (“MADtv”), Erik Griffin (“Murder Mystery”).

Dive into a thrilling tale when “Mortal” arrives on Blu-ray (plus Digital) and DVD Tuesday Nov. 10, from Lionsgate. It also is available on Digital and On Demand.

In this spellbinding thriller, a sleepy Norwegian town erupts after an American backpacker is arrested. Witnesses claim a teen died after touching the stranger, and that he inexplicably started a fire that engulfed a farm. He warns a psychologist, Christine, that he has supernatural powers, and that anyone who gets too close to him dies. Is he a liar, a freak of nature, an angry god? Determined to find the truth, Christine draws nearer, and what she finds is beyond her wildest imaginings.

From filmmaker Darcy Weir, and featuring frighteningly true encounters with Bigfoot, “Sasquatch Among the Wildmen” arriving on DVD and On Demand Tuesday Nov. 10, from Uncork’d Entertainment.

Throughout history, ape-like humanoids have appeared in myths and legends of cultures from around the world. The best known wildmen that people still say they see roaming the wilds of North America are known as Sasquatch or Bigfoot. Discover the history of relic hominids (The Russian Almasty, the Chinese The Yeren, the Himalaya’s The Yeti and more) from around the world. The film features Dr. Jeffrey Meldrum, Derek Randles, Shane Corson, David Ellis, Darcy Weir and Lee Lustig.

If you can’t trust your mind, trust your heart when “Words on Bathroom Walls” arrives on Digital Tuesday Nov. 10 and on Blu-ray (plus Digital), DVD, and On Demand Tuesday Nov.17 from Lionsgate. This drama is based on the debut novel by Julia Walton. The film stars Charlie Plummer, Andy Garcia, Taylor Russell, AnnaSophia Robb, Beth Grant, Molly Parker and Walton Goggins.

Check in to the Rosebud Motel for the final time when “Schitt’s Creek: The Complete Collection” arrives on DVD Tuesday Nov. 10, from Lionsgate.

The “Schitt’s Creek: The Complete Collection” DVD will be available for $59.98 (SRP).