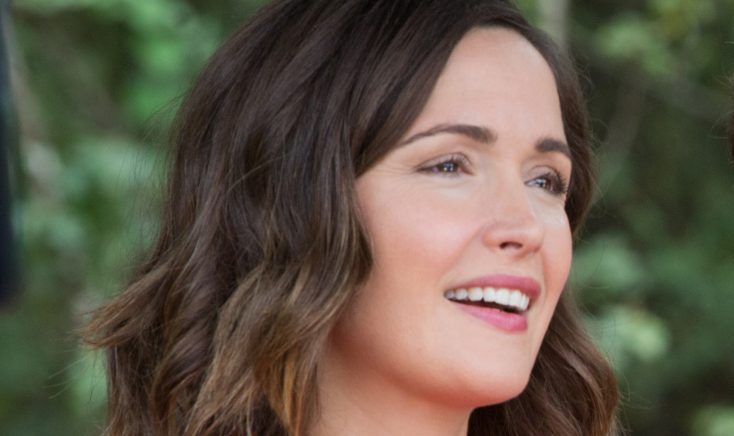 UNIVERSAL CITY, Calif.—Rose Byrne is best known for her role as Ellen Parsons on the long running TV series “Damages,” in which she co-starred with Glenn Close for five season.

The Australian actress also is known for her comedic skills in films including “Bridesmaids,” “Spy” and the 2014 comedy “Neighbors.” Revealing even further range, she also reprises her brainy scientist Moira MacTaggert role in the upcoming “X-Men: Apocalypse.”

In “Neighbors 2: Sorority Rising,” the brunette beauty returns her role as Kelly Radner, a young mom who’s relishing the quietude of her suburban neighborhood after defeating a group of college boys who turned the home next door into a frat house. She and her husband Mac (Seth Rogen, reprising his role) now have a toddler and are expecting another baby, which means they need to sell the house for a bigger one. But they now face a new enemy—a sorority that has moved into the boys’ vacated digs. Concerned that the home will fall out of escrow derailing their moving plans, they have to find a way to get rid of the noisy girls next door. To help in their quest, the Radners recruit former frat boy foe Teddy (an oft-shirtless and chiseled Zac Efron). The teen-age sorority sisters, led by “Carrie” star Chloe Grace Moretz, turn out to be formidable foes.

Byrne soldiers through an interview despite a lingering spring cold that has her feeling a bit run down. Of course, she also is suffering from a lack of sleep thanks to new arrival Rocco, her 3-month-old son with actor Bobby Cannavale (“Boardwalk Empire”).

Appearing to have dropped all of the baby weight since her pregnancy, the 36-year-old actress sat down for an interview outside the “Leave it to Beaver’’ house on the Universal Studios lot to discuss reprising her “Neighbors” role, motherhood, “Damages” and returning to the stage later this year in her native Australia.

Q: Returning for “Neighbors 2,” can you talk about working as a team with Efron’s Teddy this time around? What was it like rubbing Zac with an oily ham hock during one scene where you’re trying to distract the girls with Teddy’s oiled physique?

Byrne: It was a new experience. I’d never felt anything quite as hard. They had injected the meat with baby oil so it was really disgusting. It also was seasoned with (spices) like thyme. You couldn’t get it off of your hands.

Q: Was it nice to have Zac on your team this time?

Byrne: It was nice. I think I have a very maternal role toward him.

Q: You have “The Meddler,” a lighthearted comedy with Susan Sarandon out, and now you have this and “X-Men: Apocalypse” coming out soon. Plus, you recently had a baby. How have you managed to maintain all this activity?

Byrne: It sounds like more than it is. “X-Men” was a real surprise, to be asked back after five years. I was so tickled. It’s such a great cast. We have a lot of fun shooting those films. “The Meddler” was very quick. I was there for about 10 days. I was lucky enough to be working while I was pregnant, while I was making this. Then, it’s that thing where (three films) come out at the same time, which I have no control over, obviously. It’s just one of those things.

Q: I think “Adult Beginners” was the first time you wore the fake pregnancy belly. How did that compare with the real thing?

Byrne: It’s a lot different, obviously. You can take that thing off at the end of the day. So it was a completely different experience. They were really lovely to me. They looked after me. You get special treatment so I plan to do it again. I plan to do it for every job. Just go in with a fake bump and say I’m pregnant.

Q: You and Seth don’t seem to mind cursing or doing stupid things in front of your characters’ toddler. Do you think that realistic as far as parenthood goods?

Byrne: Yeah. Nick (Stoller, the director) is the father of two young girls. He’s experienced stuff from being a parent. He relates to having giving up a certain lifestyle or not being able to get out of the house or the inappropriate things you say in front of your kids or having sex in front of your kids—whatever these things that happen day to day in your life I didn’t really understand until I had a child. My son is only three months old so I can say whatever I want. (She laughs.)

Q: Did you feel you had unfinished business with Kelly after the first “Neighbors?”

Byrne: I walked away from the movie and when it came out it was well received. The characters resonated with people. They really liked them. I wanted to step back into those shoes again, and (the sequel) gave me an opportunity to do that. The question was, where is this couple now? They’re such a unique screen couple. You don’t see couples like this on screen that often. They really get along and they’re a team. They’re not fighting. The woman is as irresponsible as the man. And they swear in front of the kid. She has a dildo and all these sorts of things. It’s supposed to be a little bit charming, hopefully. So I was just wondering where they would go next. It took a while. Sequels are challenging. How many good sequels are out there? Maybe five. It’s really hard and we were all aware of that. We were up to the challenge and wanting to see what they could do. Eventually, they came up with a good storyline and a good outline, and so I wanted to do it.

Q: In your love scenes with Seth, was he nervous? Were you nervous?

Byrne: They’re so unromantic to do. There’s a boom over you and you’re wearing weird underwear. Sex scenes for comedies are even worse. Like this one, I’ve got oatmeal in my mouth. It’s so unsexy. But at this point, we’ve known each other for a few years. He’s so funny. We just laughing half the time and it’s uncomfortable and awkward. It becomes such a technical thing, anyway. They wanted to set the tone so they started it in a similar way to (the original) in terms of the opening scene.

Q: When you first read the script, did you have a little trepidation? Did you wonder, “What are they going to have me do now?”

Byrne: The first one is such a learning curve. I definitely pushed myself in terms of what I’d done before with the physical comedy, the breastfeeding and all those jokes. This time around my skin is thicker. The script is the script and you always go back to it. But it also changes so much. The opening scene we didn’t shoot until halfway through the shoot. We had a different opening scene. So I didn’t go back in such a naïve way. I know what it’s going to be like. But I still get shocked, like the tampon joke, I was like, “Whoa!” (She laughs.) I thought it was hysterical.

Q: Was there a moment while making this film where you couldn’t stop laughing?

Byrne: There was one scene where Ike Barinholtz and Carla Gallo dress up as a Hasidic Jewish couple and they’re coming out of the house next door. I could not keep it together. And they just kept going and going, and I was crying. I can’t look at Carla without laughing. She cracks me up. It made me lose it.

Q: Do they have sororities in Australian colleges?

Byrne: No, not traditionally like that. They’ve got clubs and stuff, nothing to do with the Greek system. For me, that adds to the comedy for the character. She’s clueless about it. It’s such a foreign concept. She has no respect for it at all. For her, it’s a really annoying and sort of fascinating spectacle.

Q: Do you have any memorable real-life neighbor experiences?

Byrne: Our neighbors at the moment, we really like them. They live below us in (New York). They’re very smart. She’s a professor of English literature, and he’s a writer for the New Yorker, and just wrote a book on fracking. They’re so smart and lovely. She’s expecting so we have a lot in common. (Bobby and I) always walk away after being with them saying, “We’re so stupid. We’re so stupid.” But we’ve been really lucky. Neighbors in New York tend to keep to themselves more but this couple we’re really friendly with.

Q: How often do you get a chance to go home to Australia?

Byrne: I go home a lot. Last year I went home for six or seven weeks. And I’m going home is September for 3-1/2 months to do a play, (David Mamet’s) “Speed the Plow,” at the Sydney Theatre Company so I’ll be home for a long time. I’m really excited.

Q: When was the last time you did theater?

Byrne: I did  “You Can’t Take it With You” on Broadway in 2014. I hadn’t done a show for 12 years prior to my Broadway experience, and it was terrifying to go back. That’s why I didn’t want to wait as long again. I love going to the theater. My boyfriend does a lot of Broadway. And I love David Mamet. I’ve studied at his school in the city, at the Atlantic Theatre Company. I’ve been such a big fan of his writing for so long. It’s part of the reason I wanted to be an actress.

Q: Are you signed up for any other movie or TV projects?

Byrne: Not yet. I’m figuring something out. Hopefully, something will happen before I do the show (in Australia). We’ll have to wait and see.

Q: You have a huge fan following from “Damages.” Do you miss doing that show?

Byrne: Yeah. I loved doing it so much. I’m still very close with Glenn (Close), which is great so I get to see her a lot. I love doing TV. I’d do another show if it were right. But that’s a big commitment when you do it. Now there’s so much good material on television to pick what you want to watch.

Q: What has surprised you the most about being a mom?

Q: And the upside?

Byrne: You just enjoy it more and more every day. As they grow more, it’s really wild. You see this thing growing in front of you.

Q: Is Bobby a helpful dad?

Byrne: Yeah. He has a 21 year old. So he knows. It’s me learning from him. I had another friend who had a kid again later in life and it all comes back to you when you’ve done it before.

Byrne: I have no idea what it could possibly be about. It would have to be a really inventive story. We’ll see. See you in four years time. They did the sequel really fast but it was challenging. It’s hard to make a sequel as good as the first one. It’s been encouraging the past few days.