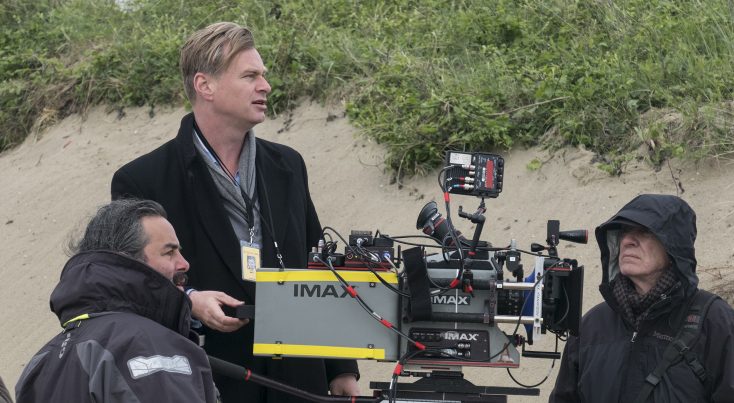 SANTA MONICA, Calif.—As a schoolboy, Christopher Nolan learned the history of the 1940 evacuation of stranded Allied troops from Dunkirk. It wasn’t until decades later, though, when the British filmmaker and his wife/producer Emma Thomas boarded a small sailing boat with a friend and ventured across the English Channel that he truly appreciated the danger those troops and their rescuers—many of them civilians on private watercraft—faced.

The Nolans’ mid-1990s voyage across the 26-mile wide body of water that separates England and France took 19 hours to complete in rough seas and bad weather. It offered a realistic impression of what it was like for those brave soldiers and the people who rescued them.

“And that was with nobody dropping bombs on us,” Nolan points out.

That experience is what led the “Dark Knight” trilogy filmmaker to want to make a film that told the story of the phenomenal evacuation, known as “The Miracle of Dunkirk,” in which tens of thousands of British, French, Belgian and Canadian troops that were rescued from the French beach, after being forced to retreat by the Germans. The evacuation took place over several days but ultimately many lives were saved. (The U.S. was not yet in the war.)

The result is “Dunkirk,” an epic action thriller in which brave acts of heroism involving the evacuation, known as Operation Dynamo, are recounted from the perspectives of individuals on land, the sea and in the air. The cast includes seasoned vets including Oscar winner Mark Rylance (“Bridge of Spies”), Oscar nominees Kenneth Branagh (“Henry V”) and Tom Hardy (“Mad Max: Fury Road”) and Cillian Murphy (“Inception”) as well as newcomers including pop sensation Harry Styles, along with Fionn Whitehead and Tom Glynn-Carney.

In an airport hangar here outfitted with vintage planes, rifles, old uniforms and other set dressing, Nolan, who wrote as well as directs the epic, spoke about bringing his first film based on true events to the big screen.

Q: What made you want to tell the story of the evacuation of Dunkirk?

Nolan: Like most British people, Dunkirk is a story I’ve grown up with.  I don’t even remember the first time I heard of the events. As kids, we received this very simplified, fairy tale version of what happened there. But, over time, and particular, an experience Emma and I had 20 years ago where we made the crossing with a friend of ours who had a small boat about the same time of year of when the evacuation took place. The crossing was extremely difficult; the Channel was very rough. It felt dangerous, even without bombs dropping on us. So, I came away from that experience with respect and fascination for the people who took part in the real evacuation. As a filmmaker, that’s the kind of thing that makes you want to make a film.

Q: What inspired your choice to tell the story from three perspectives: one by land, one by sea and one by air? What did you hope to gain from those perspectives?

Nolan: What I was hoping to gain was a way of maintaining a subjective storytelling approach but still building up a coherent picture of the larger events at Dunkirk. Everything in the film is intended to be intense, suspenseful and objective with these guys on the beach seeing what’s happening from their points of view. I also wanted to build this bigger picture that requires a view from the air and from the sea, from the people coming over to help with the evacuation. In that way, not let the audience step out of the movie, to step out of the perspective. I didn’t want to cut to generals in rooms with maps. I didn’t want to give the audience knowledge the characters didn’t have, other than through the interaction of three distinctive story threads.

Q: You were determined to make this film look as real as possible, using actual planes of that era, right?

Nolan: Planning the aerial scenes, it was very important for us to try and achieve as much in camera as much as possible. We were able to get real Spitfires, real bombers, and really get the IMAX camera places we were going, and to put the audience in the cockpit. There was a lot of attention to detail and a lot of careful planning. We bought Yak airplanes because they’re a similar size and shape to the Spitfires. It has two cockpits so we had a real pilot flying and the cameraman in the other seat to shoot close-ups. We really wanted to tell this aerial story in a way that we hadn’t seen before.

Q: You cast pop star Harry Styles to play one of the soldiers in this. Did you worry his celebrity might overshadow his co-stars?

Nolan: My job as a director is to see potential in people you are thinking of casting, whether you’re talking about somebody who’s never done a film before like Harry or Fionn (Whitehead) or somebody very experienced, like Mark Rylance or Ken Branagh. You have to see the potential for them to do something they’ve never done before. That’s really the ideal. You try to do something where they’ll feel challenged. You can’t worry too much about previous roles like Mark has done or Harry’s celebrity. If we all do our job right, the audience becomes invested in the world we’ve created and take it on those terms.

Q: How did you keep the balance between showing the huge scope of this story and keeping it a very human story?

Nolan: The idea behind the structure of the story and the way in which we’ve told it is really by virtue of trying it on a very human scale, a very intimate scale, and create what I refer to as an intimate epic. I’ve tried to keep it at a very intimate point of view with these (three) story threads but gradually have them, over the course of the film, build up a cumulative picture of a very large event.

Q: What were your cinematic influences for this film?

Nolan: Creatively, we looked at a lot of suspense films. I really wanted the film to be driven, primarily, through the mechanism of suspense. I think it’s one of the most cinematic film forms, just pure cinema. So, we looked at Hitchcock. The one I point to most is (Henri-Georges) Clouzot’s “Wages of Fear,” which we honed in on for that language of suspense. I like to cast a pretty wide net in terms of what films I like to show the crew when we start. We looked at a lot of David Lean films in terms of the treatment of landscape—films like “Ryan’s Daughter,” an extraordinarily visual film.

Q: What was it like shooting a lot of the film with IMAX cameras?

Nolan: I’ve been working with IMAX for about 10 years now. With each film, I try to maximize my use of it. This film felt, more than any other film I’ve made, like I needed to try to immerse the audience in the experience and create a cinema experience, and to take them there. IMAX is the best format to do that. Obviously, it creates production challenges but I think it’s well worth it—the finished product.

Q: What’s the story about the ticking watch that you hear in the film’s score?

Nolan: The genesis of the track is a recording I made of a watch that I own that I gave to Hans (Zimmer, the composer) and we developed sort of a rhythmic language of how we would build up the score to fuse with the picture and create a sense of forward momentum for the film.

Nolan: For me, there’s a very small moment where there’s a look exchanged between Mark (Rylance’s) character and Tom Glynn-Carney’s character (Peter) during a key moment. It was something I hadn’t included and overlooked in the script in terms of their responses when it happened. Mark pointed it out to me and he worked with Tom and Barry (Keoghan, who plays a young civilian rescuer named George) about what would be happening outside, in terms of the script and what would be happening between the scenes that I’d written. What you see is something that (as a director) you dream of when you bring on great talents, like Mark and Tom (Hardy) and Harry (Styles). You hope for those moments that you didn’t anticipate but they come to define a particular part of the story.

Q: How do you choose your projects?

Nolan: It’s always been about the story. It’s been about finding the story that hooks me where I can find an emotional connection. I’m very simple-minded; I only do one thing at a time. I’m not really good about planning what I’m going to do next. So, I dive in and concentrate on doing one film over the next two or three years. It has to be a story that I feel is going to hook me emotionally over a long period of time and that I can stay enthusiastic about.