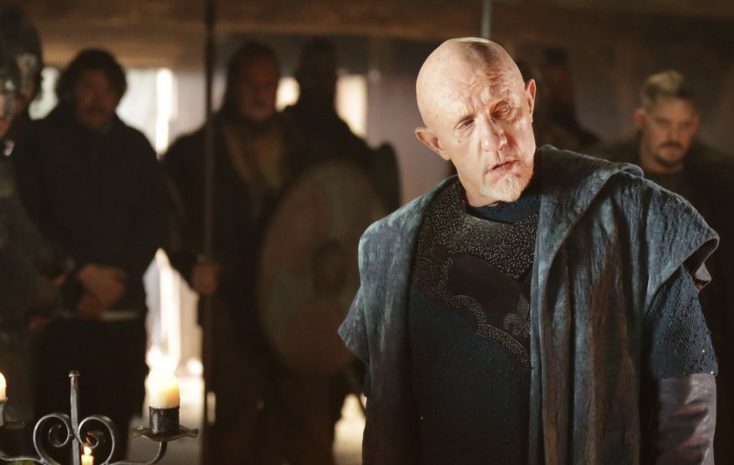 HOLLYWOOD—“Better Call Saul” fixture Jonathan Banks goes back—way back—in time to the Dark Ages in the Dutch historic epic “Redbad,” arriving in limited theatrical release and other formats Friday Sept. 14. He plays Pepijn, leader of the Franks, a tribal people at war with the Frisians during the 8th century in what is now the Netherlands.

Directed by Roel Reine, the dialogue of the film mostly is in Dutch but with some characters—such as Banks’—speaking English. When offered the role, Banks saw it as an opportunity to explore a period of history on film that has personally long fascinated him. Even before he was cast as the fearsome rival leader to the titular protagonist, he read what little was available about that period of European history between the fall of Rome and the dawn of the Renaissance era of which little is known.

In “Redbad,” the Frisians and Franks are locked in constant bloody battles over land and ideology. Barbarian Pepijn rules with an iron fist and makes an unlikely alliance with Christian monks who want to convert the locals to fortify his position.

The $9.2 million film is considered one of the most expensive Dutch films ever made, with a cast of thousands filmed last year across several northern European countries. “Redbad” stars Dutch actor Gijs Naber, as the titular hero.

Banks was able to fit the film project into his schedule while “Better Call Saul” was on hiatus. He spoke by phone from his coastal California home about his interest in the subject matter and his joy in playing Mike on “Better Call Saul.”

Q: How did you get involved in this? What about the material interested you?

Banks: It was brought to me. What interested me is the whole period of history. I love the Dark Ages. The idea as the Catholic Church moved north with the idea of if you could turn a warlord, then you could turn his followers and his tribe. Even when Rome was sacked Alaric was a Christian (the 4th century Visigoth ruler) and had declared Rome a free city and, of course, it was sacked and raped and pillaged. Anyhow, I love that period of history—the Dark Ages are great. There’s a book that William Manchester wrote called “A World Lit Only by Fire,” that I’ve read a couple of times. So, when this project came up, I thought, “This is great. I really want to do it.”

Q: There haven’t been many films made about this period.

Banks: Not only are there not many films (about this period) but there aren’t many books written about it. The Dark Ages were the dark ages. From the time Rome fell to the Renaissance, trade stopped on the Mediterranean, libraries were burned. A thousand years later, at the beginning of the Renaissance, the finest roads that people traveled on were still the roads the Romans had built. It wasn’t until Constantinople became Istanbul that some of the Greek manuscripts were unearthed, or they would have been lost to us. Obviously, I have a smattering of knowledge about the period.

Q: How long have you had that interest?

Banks: I love to read good history and there are great history writers that almost write like novelists. It’s not dry; it’s wonderful. And, of course, we’re walking knee-deep in blood wherever we walk in the world. So, it’s interested me for a long time. This is why it’s interested me: with the progress we’ve made and how fortunate you and I were to be born when we were born, as far as healthcare and running water and other things, there are still elements in this world that would drive us right back into the Dark Ages.

Q: There was some controversy when the film came out in Europe over the depiction of Christianity.

Banks: Oh, please. Probably at the base of most faiths are humanity and goodwill and loving your fellow man. It’s when the interpreters turn it into an aberration that it becomes violent and ugly and murderous, and it becomes about “You submit to my will or you’re going to go to Hell. And I’m going to kill you before you go to Hell.”

I want to make it clear that if we’re not careful, we can be thrown into another Dark Age—if we don’t blow ourselves off the face of the Earth before then.

Q: The film was shot in various countries throughout Europe. Where did you shoot your scenes?

Banks: In the Netherlands and Belgium.

Q: Had you been there before?

Banks: Only briefly, and I loved it. We were pretty far removed in Belgium, where we shot at (Bouillon) Castle off the beaten track. In a small town where I could sit and read for a couple of months, and I’d be very content.

Q: The dialogue in the film is in Dutch and English. Did your fellow cast members and crew speak English with you?

Banks: Most everyone spoke English. The director, Roel Reine, speaks perfect English, and what a joy he was. I had not seen his film “Admiral” before I shot this film but then I saw it afterwards and I thought, “Boy, I’m glad I got to work with this guy.”

Q: There were a lot of battle scenes in this film and you had 8,000 extras. This was a bloody and fearsome period of time and things did not “progress” without a lot of bloodshed, and he didn’t spare that in making this film.

Banks: Yeah, and it’s not gratuitous. You can’t be too bloody about this period. It’s overwhelming when peasants are starved, brutalized and left to die out in the elements. The one thing you can’t depict because we’ve denuded most of the planet, that area was dense with forests. So, if a knight decided he wanted to take you off, you may not have been farther from your home than two hills away, because the forest was dense. There was a chance you’d never find your way home again.

Banks: Absolutely. There were five different crusades. Saladin and Richard the Lionhearted were bloody horrible guys. Roel could have filmed blood for three hours and it still wouldn’t have been an exaggeration. Education stopped in the Dark Ages. There was no repercussion for murder. There was no law. Another book about the Dark Ages is Thomas Cahill’s “Sailing the Wine Dark Sea: Why the Greeks Matter.” In the 1400s, the Black Plague took out a third of the population of Europe.

Q: How did that fit into your “Better Call Saul” schedule?

Banks: I’ll shoot for five months on “Better Call Saul,” and then I can do other things … or just sit. (He laughs.)

Q: Were the people in Belgium familiar with your Mike character?

Banks: Pretty much. It’s been enough years now with “Breaking Bad” and “Better Call Saul” that it’s reached everywhere in the world.

Q: What are you looking to do these days? What haven’t you’ve done that you’d like to do?

Banks: I can’t give you a clear answer on that. I want to do things with quality. I love the actual work. I’m not so big, at this age, on the travel and being away from home.

Q: What would you like to see happen on “Better Call Saul?”

Banks: Mike has a granddaughter and I’d love to see two things: I’d love to see the confrontation between them. It’s not all balloons. Kids can have a snotty attitude. I want to see the granddaughter say to Mike, my character, “Tell me about my father,” because it puts Mike on the spot, and how is he going to deal with that? Even if he says to his granddaughter, “I don’t want to talk about it,” that’s not an answer. I want her to push him because she’s the only person he’ll ever open up to. Also, my son must have had a mother. What happened to her? So, going forward, those are things I would be interested in.

Q: Can you give input to the writers or do you wait and see what they’ve cooked up for you?

Banks: It’s obvious how good the writers have been. So, do I trust them? Absolutely. Do I disagree with them sometimes? Always have. But, in the end, do I trust whatever they’re going to bring to me? I do.

Q: What percentage of Mike Ehrmantraut is Jonathan Banks and vice versa?

Banks: I don’t know. I love Mike. I’m not being coy. I’ve seen some stuff in my life—and that sounds way too dramatic. I just walked into my living room and noticed that my most valuable painting is not on the wall. You’ve gotta have a sense of humor. I’ll find out. My wife’s outside. The painting’s been hanging in the same place for 20 years.

Q; When do you start filming the next season?