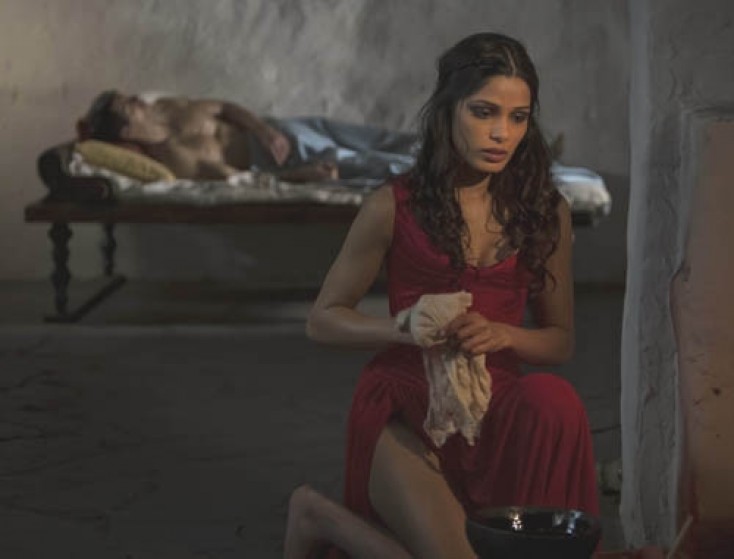 HOLLYWOOD—If an oracle had appeared to Freida Pinto in 2006 and told her she would be a world famous actress in five years, the Mumbai-born beauty would not likely have believed it.

“Not having any connections in the film industry makes it very difficult to get your foot in the door,” the former model says.

Pinto lucked out, though. She got cast at her very first movie audition, which turned out to be the sleeper hit “Slumdog Millionaire.” The rags-to-riches drama won numerous awards, including Best Picture at the 2009 Academy Awards.

Her life has been a whirlwind ever since. She starred in Woody Allen’s “You Will Meet a Tall Dark Stranger” and this year’s sci-fi hit “Rise of the Planet of the Apes.” She also is a spokeswoman for L’Oreal. She stars in the upcoming “Black Gold” with Antonio Banderas and she recently wrapped a big screen adaptation of Thomas Hardy’s “Tess of the d’Urbervilles,” set in India.

Meantime, she plays the mythological Greek oracle Phaedra in the sword-and-sandal epic “Immortals.”

“I wanted to try something different,” she says. “This is my first association with a big budget film.” (She filmed “Immortals” before “Planet of the Apes.”)

As the virgin Phaedra, she has the ability to see into the future—and the times being the terrifying reign of genocidal King Hyperion (Mickey Rourke), the future is looking pretty grim. Captured by the king’s men, the soothsayer unexpectedly falls in love with a young rebel leader named Theseus (British hunk Henry Cavill). However, Phaedra stands to lose her psychic powers if she and Theseus consummate their relationship. What’s a girl to do?

“She wants to feel these human feelings of being touched and feeling real joy,” explains the actress. “But then she will no longer have the gift of the visions.”

As for her own thoughts on psychic abilities, Pinto believes in “some kind of supernatural energy.”

“I’m not necessarily saying it’s a religion or God or anything like that but I do believe in powers,” she says.

The popular actress says she was lucky to work with a top-notch cast and a world-class director in Tarsem Singh (“The Cell,” “The Fall”).

“Tarsem has the first word and the last word on everything and that, to me, felt great,” she says. “At the end of the day, you enter a film as an actor knowing your director is the captain of the ship and you want the director’s vision to be carried out in the film. So in that sense, it helped us as actors because he guided us through every step of the way.”

Pinto was game for everything the filmmaker asked her to do, though she chose to use a body double for a love scene with Cavill.

“He was an absolute gentleman during that, which we shot on the first day,” she says. “He is very giving as a performer. Those are the kinds of actors you want to work with.”

Having imagined herself as Scarlett O’Hara and other cinema icons growing up in Mumbai, Pinto feels she is getting a chance to live out her childhood fantasies by appearing in movies.

“When I was asked to play the oracle priestess, I felt like I was born to do it,” she says, smiling.

As perhaps the most famous South Asian actress in the world, Pinto is proud to be asked to do a variety of roles.

“It’s a multicultural world,” the brunette beauty says. “I think the timing is right and to world is getting much smaller and people are realizing that. Look at any country right now and you’ve got a multicultural population living there.”

Having lived in England for much of her adult life, Pinto considers herself a world citizen right now.

“My home right now is BA,” she says, referring to British Airways, where she spends a lot of time traveling to locations around the globe. “I really don’t have a home base. Bombay (Mumbai) is always home. I keep going back there and I live in London too.”

Previous PostJ. EDGAR (release date 11/09/11): Eastwood brings Hoover back to life
Next PostBranagh Channels Olivier in ‘My Week With Marilyn’