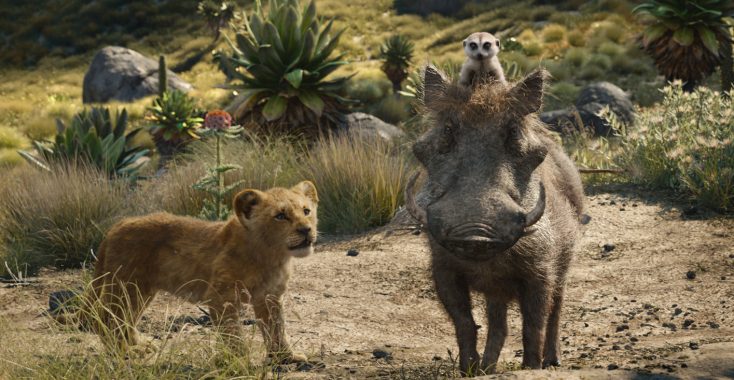 In Hollywood these days, the Circle of Life means that if a movie was a hit in the past, it’s likely going to be remade in the future. This is especially true of Disney’s animated classics, many of which—like “Aladdin,” “Dumbo,” “Beauty and the Beast” and “The Jungle Book”—have been given the live-action/CGI treatment in recent years.

The latest Disney animated masterpiece to complete its cinematic destiny of being updated is “The Lion King.” Directed by Jon Favreau (“Spider-Man: Far from Home”), who arguably made the 2016 remake of “The Jungle Book” the new definitive version of that story, the film brings to life the story of Simba—a royal lion cub exiled by his devious Uncle Scar after thinking he killed his father, King Mufasa (voiced once again by James Earl Jones)—like never before by blending live-action filmmaking techniques with photoreal computer-generated imagery. The result is a dazzling, photoreal movie that looks like it was actually filmed out on the Africa savanna with real animals, yet somehow doesn’t quite capture the magic of its 1994 animated predecessor.

While much of the film stays true to the original “Lion King,” the remake isn’t just a shot-for-shot, word-for-word remake of the animated film as some might think. Clocking in at 118 minutes, the remake is 30 minutes longer than the animated film, so Favreau truly takes his time setting up the classic story. Nala, Simba’s childhood best friend and future love interest, gets a slightly meatier role as the lioness who eventually leaves Pride Rock under Scar’s rule to find help and ends up discovering that Simba’s still alive, although her part isn’t nearly as evolved as Jasmine’s empowering role in the recent “Aladdin” remake. The screenplay by Jeff Nathanson (“Catch Me If You Can”) also changes Scar’s relationship with the hyenas, as they aren’t working together at the start of the film when young Simba and Nala venture off into the dangerous elephant graveyard. There’s no big payoff for this change in the story, although it does make Scar’s horrific fate (especially when it looks so real) all the more believable since the hyenas aren’t really that close to him in this version of the film.

What’s odd is that for a movie that runs a half-hour longer than its original version, the remake of “The Lion King” seems hurried and choppy during its second half. While the first half of the film unfolds beautifully and truly takes its time showcasing the world in which the story takes place, once Simba meets up with Timon and Pumbaa after fleeing Pride Rock, it’s almost as if Favreau is rushing towards the climax, checking off everything fans of “The Lion King” would expect to see in the remake without really giving the scenes much thought.

Much has been made about the lifelike animal characters, too, and their inability to emote emotions like their animated counterparts. While this is true in some scenarios, it doesn’t take away too much from the story, as all of the voice actors, which include Beyoncé Knowles-Carter (“Dreamgirls”) as grown-up Nala, John Oliver (“Last Week Tonight with John Oliver”) as Zazu, Billy Eichner (“Billy on the Street”) as Timon and Donald Glover (“Solo: A Star Wars Story”) as grown-up Simba, do a commendable job with their parts. Seth Rogen (“Knocked Up”) is especially great as Pumbaa, and Chiwetel Ejiofor (“12 Years a Slave”) gives a much more menacing performance as Scar than Jeremy Irons that fits the tone of the new film better. It’s just a shame that in this extended iteration, Ejiofor’s Scar only gets the opportunity to perform an abbreviated (and differently worded) version of “Be Prepared,” one of the greatest Disney villain songs of all time.

There are a few other disappointing story changes as well, particularly the live bait scene during the movie’s action-packed climax (although it makes sense since the odds of Timon finding a hula skirt in the savanna are pretty slim). That’s not to say some of the story changes aren’t enjoyable—Timon comes up with another hilarious number to perform instead to distract the hyenas—but when you’re dealing with a story as beloved as “The Lion King,” there are certain scenes and lines of dialogue fans will expect that, when they’re cut from the film, take away from the overall experience.

Ultimately, Favreau’s “The Lion King” doesn’t bring dishonor to the throne, but it’s not nearly as good as the “Beauty and the Beast” or “The Jungle Book” remakes, either. The visuals are absolutely breathtaking, the voice actors are all great, all the classic songs by Elton John and Tim Rice are included and there are no major changes to the story that should upset fans too much. Yet for some reason, the movie just isn’t as engaging as the original animated musical. It’s always hard taking a beloved film and updating it, and while there’s no doubt Favreau put his heart and soul into the project, “The Lion King” just doesn’t improve upon its animated predecessor like Favreau’s “The Jungle Book” did or come as close to being as perfect as its predecessor like 2017’s “Beauty and the Beast.” While fans of the original “Lion King” will no doubt be wowed by the film, as it truly is something that should be experienced on the big screen (baby Simba is so cute!), audiences can’t help but leave the theater feeling slightly underwhelmed, too.