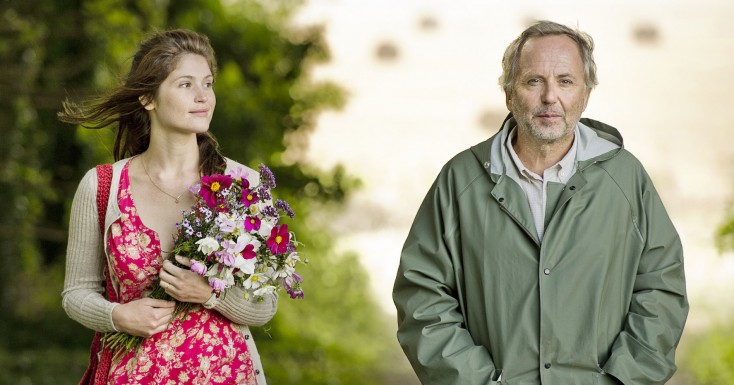 “Gemma Bovery” is as good-looking, sexy and thoroughly irresistible as its star Gemma Arterton. The pouty-lipped beauty portrays a new-to-Normandy Brit whose casually carnal charms enchant a middle-aged French baker named Martin (Fabrice Luchini). Gemma’s careless obliviousness to Martin’s deadpan yearning, the naughtiness that keeps her from being completely nice, and some unexpected rain that falls on her sunny summer add just the right amount of bittersweet spice to this tasty French pastry.[private]

Martin’s obsession isn’t merely due to the fact that Gemma is heart-meltingly lovely and effortlessly sensuous (although those certainly would be reasons enough). As a former publishing house editor and literature lover, Martin also sees intriguing parallels between Gemma and the similarly named title character of the classic Flaubert novel he adores. (Whether Martin went so far as to name his dog Gus after the author is unstated, but likely.)

Gemma, her decent but dull husband Charlie (Jason Flemyng), and an illicit-love-interest young law student (Niels Schneider) appear to be unknowing 21st-century equivalents of “Madame Bovary”‘s 19th-century dramatis personae. When Martin begins worrying that he somehow may be directing everyone’s actions to correspond to the book’s storyline, he injects himself into the plot to prevent a modern-day reenactment of its tragic ending.

Like 2010’s “Tamara Drewe” (a “Far From the Madding Crowd”-derived delight that starred Arterton as a different every-man’s-fantasy), “Gemma Bovery” is adapted from a Posy Simmonds graphic novel that playfully updates and reboots a classic non-graphic novel.

Although not entirely light and breezy, “Gemma Bovery” also isn’t weighed down with “Madame Bovary” elements such as an unwanted daughter (Gemma is childless), a near-death illness (here reduced to the allergic effects of a bee sting) or a botched surgery by an incompetent doctor husband (the movie’s Charlie is a furniture restorer who seems to be good at his job). Although Martin-as-narrator makes a puzzling reference at one point to some debts Gemma apparently acquired offscreen, she never is portrayed in anything vaguely resembling Emma’s ruinously dire straits. And while Gemma’s boredom leads to adultery, she never becomes Emma-level compulsive or self-destructively neurotic about it.

Director Anne Fontaine (who cowrote the screenplay with Pascal Bonitzer) keeps the humor pleasantly understated. Martin describes a small wave from Gemma as being sufficient to end “10 years of sexual tranquility,” but he’s always a wistful observer as opposed to a leering voyeur. Even a scene in which he gets caught complying with Gemma’s “suck me” command to remove a bee’s stinger from her lower back is more amusingly awkward than slapstick silly.

Just as Arterton’s tank top and denim cut-offs outfit in “Tamara Drewe” was unforgettably eye-popping, her gloriously shameless lingerie-reveal scene in this film is similarly not for the faint of heart. The camera worships Arterton’s placid but provocative attractiveness as much as Martin does, whether lingering on close-ups of her flawless face or capturing every jiggle of her lushly ripe body.

A scene in which Gemma goes back to kneading dough at Martin’s bakery after removing her sweater and putting up her hair may not pass health-inspector muster, but it’s hot enough to make more than bread rise.

Minor plot quibbles include a question as to why Gemma would keep a certain statuette secret. Gemma “talk writes” when updating her diary, an unlikely habit even for someone who hasn’t read “Madame Bovary” but thinks it sounds “really wacky.” The film’s one-more-joke coda, which is slightly altered from the graphic novel’s version, feels unnecessary and slightly undercutting. Also, this is yet another movie told almost entirely as an extended flashback that eventually arrives back at its first scene, which always seems self-sabotaging.

Those flaws are easily overlooked in this otherwise captivating confection, however. Nearly every change the screenplay makes to the details of the original graphic novel—which spends too much time on Charlie’s depressing ex-wife troubles in England, as well as featuring a Gemma who can be off-puttingly bitter and materialistic—is an improvement.