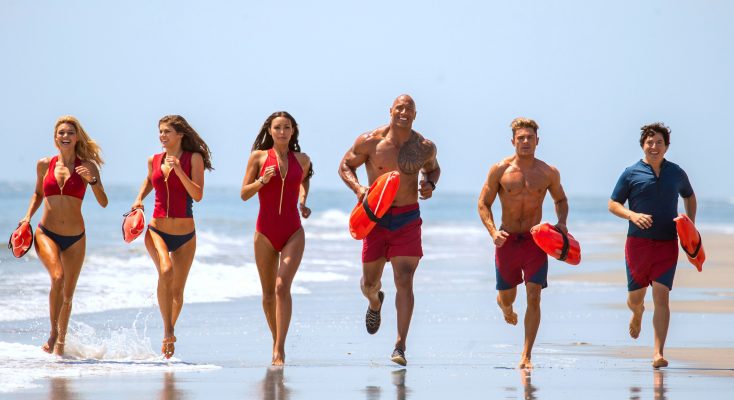 Right from the opening sequence where Dwayne “The Rock” Johnson jumps into the ocean in slow motion to save someone’s life, it’s clear that Paramount Pictures’ big-screen adaptation of “Baywatch” isn’t taking itself too seriously.

And that’s a good thing.

Similar to 2012’s big-screen adaptation of “21 Jump Street,” “Baywatch” takes a popular TV drama – in this case, one of the most watched television shows in the world – and turns it into a meta comedy that both acknowledges its roots and playfully makes fun of them. Known more for its busty lifeguards running in super slow-mo than its engaging storylines, “Baywatch” the TV series has almost become a joke over the years—TV’s ultimate guilty pleasure, if you will.

Given the hard-to-take-seriously source material, director Seth Gordon’s (“Horrible Bosses”) big-screen adaptation of “Baywatch” has a lot of freedom to do whatever it wants, as fans of the TV series aren’t really coming to watch the movie for some intellectual entertainment. So it’s okay that the bad guys are obvious from the moment they step onscreen, that the story is predictable and that, well, the casting doesn’t make much sense (the new cast is playing the same beloved characters from the TV show, including Johnson as Mitch Buchannon and Kelly Rohrbach as CJ Parker, even though David Hasselhoff and Pamela Anderson reprise the exact same roles). None of that really matters so long as the movie is fun, and “Baywatch” is highly entertaining.

Along the way, Matt and Mitch bump heads, but eventually the disgraced Olympic swimmer realizes that the Baywatch team isn’t just trying to save strangers’ lives with their risky exploits (which he notes resemble “a really entertaining but far-fetched TV show”)—they’re trying to save his, too, by giving it purpose once again.

Yes, “Baywatch” has its cheesy moments, but surprisingly it’s not as over the top or gratuitous as one might think. One of the film’s biggest surprises is that, despite its R rating, there’s no female nudity, which many fans might have thought would be a given considering the TV show is famous for its many bouncing bosom shots. For female fans hoping the tables have turned, there’s no nude shots of Johnson or Efron either, although the two do compete in a strong man competition of sorts that shows off Efron’s freakishly buff body. Seriously, he somehow makes The Rock look out of shape.

Johnson, as always, is super charismatic as Mitch Buchannon, and gets in quite a few laughs with his constant jabs at Efron’s character (one in particular, which we won’t spoil here, really hits the nail on the head). Efron does a commendable job as well as the selfish gold medalist who doesn’t quite understand what it means to be a team player.

Although the two stars don’t really give their castmates a lot of time to shine, viewers never feel like “Baywatch’s” female lifeguards are there just for eye candy. They each seem like intelligent, crucial components to the lifeguard squad, which is nice. When Stephanie gets overlooked for a promotion, the rest of the team even acknowledges that she should have been given the job instead of one of her male colleagues. The story also explains later on the nefarious reason why she wasn’t given the opportunity she so rightfully deserved.

However, while “Baywatch” is enjoyable to watch, the movie doesn’t quite reach the comedic highs of “21 Jump Street” or its sequel, “22 Jump Street.” There are no real laugh-until-your-sides-hurt moments, although the scene where Mitch, Summer and Matt go undercover in a morgue tries really hard to be a contender. The film just coasts along on being funny— not hilarious—throughout its near two-hour runtime. While that’s not necessarily a bad thing, viewers can’t help but feel the action-comedy could have been funnier.

Then again, “Baywatch” the TV series could have been better, too, but that didn’t stop audiences from tuning in week after week. It was fine for was it was—pure entertainment—and its big-screen adaptation follows in its sand-covered footsteps. “Baywatch” won’t be winning any awards, but it is pure summer fun—and moviegoers could always use an entertaining escape.