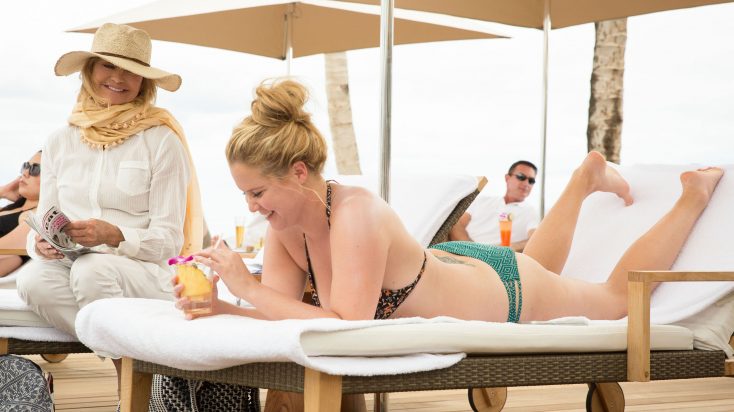 It’s hard to believe it’s been nearly 15 years since Goldie Hawn last graced the big screen in the dramedy “The Banger Sisters.” When it was announced that the Oscar-winning actress (“Cactus Flower”) had been cast to play Amy Schumer’s mom in the 20th Century Fox comedy “Snatched,” it seemed like the perfect role to mark the beloved actress’ return to the big screen. Not only do the two stars look a bit like mother and daughter, but the comedy icon and comedy’s latest “It” girl also seemed like a comedy dream team.

In the film, Schumer (Comedy Central’s “Inside Amy Schumer,” “Trainwreck”) plays Emily Middleton, a young woman who just can’t seem to get her life on track. The same day she loses her job at a local clothing store, her budding rock star boyfriend Michael (Randall Park, “Fresh Off the Boat”) breaks up with her. If that wasn’t bad enough, Emily and Michael were set to go on a non-refundable trip to Ecuador.

Desperate not to miss out on the journey of a lifetime, Emily invites her overprotective mother, Linda, along instead. Once a free spirit, the divorced mother of two now spends the majority of her time at home with her cats and her agoraphobic son Jeffrey (Ike Barinholtz, “MADtv”), following her self-absorbed daughter’s life on Facebook. Linda has no interest whatsoever in visiting South America, but determined to spend some quality time with her daughter, reluctantly agrees.

Once in Ecuador, Emily is eager to hang out by the hotel pool and experience the local culture while Linda wants nothing more than to hide from the sun and finish the book she’s been reading from the safety of her hotel room. Determined to find the adventurous part of her mom she never really knew, Emily drags Linda along on a date with a man she met the night before at the hotel bar. What begins as a simple day trip to check out the sights eventually turns into Linda’s worst nightmare, though, when Emily and Linda are kidnapped by some local criminals who put a ransom on their heads for their safe return to the United States.

Emily and Linda somehow manage to escape, but find themselves in the middle of Columbia trying to safely reach the U.S. Embassy in Bogotá, with the bad guys (or so-called bad guys—they’re more comical than threatening) hot on their trail. What follows is a comedic chase filled with peril, murder and quite a few laugh-out-loud moments. One scene involving a tapeworm, in particular, is genuinely hysterical, although a callback to that scene later on in the film falls flat.

And that’s the problem with “Snatched,” directed by Jonathan Levine (“Warm Bodies,” “50/50”). While Hawn and Schumer keep audiences entertained throughout the fast-paced flick (which clocks in at just 90 minutes), the movie isn’t quite as funny as it could be—or quite as funny as it thinks it is. Granted, there are some great comedic moments, including a sidesplitting bit involving Emily and the two women she and her mother meet at the posh vacation resort (played by Wanda Sykes and Joan Cusack) trying to jump onto a truck, but the comedy is hit-and-miss and never quite reaches its full potential. When a film stars comedy heavyweights like Hawn, Schumer, Sykes and Cusack, audiences should expect to leave the theater in pain from laughing so hard. Sadly, though, Hawn’s natural comedic ability is held back here for Schumer’s sake, with Hawn almost playing the straight woman to Schumer and her wild antics (which include rinsing off her lady parts in a public restroom as the door swings open and accidentally exposing one of her breasts while she’s on a date).

“Snatched” also doesn’t quite have the same amount of heart as Schumer’s 2015 hit, “Trainwreck.” Sure, there are a couple of emotional mother-daughter moments as one would expect from this type of movie, but that earlier comedy balanced its humor and heart much more effectively. “Snatched” just feels like it’s going through the motions.

Sykes and a silent-but-funny Cusack aside, most of the film’s cast is easily forgettable. The only real standout is Barinholtz, who elicits a few chuckles as Emily’s annoying brother, Jeffrey. Viewers will hear Barinholtz saying “Ma-ma” on repeat in their head long after the credits roll. The movie truly focuses on Hawn and Schumer’s chemistry together, and the two do the best they can with Katie Dippold’s (“Ghostbusters”) uneven, cliché-filled script.

Although “Snatched” may not be Hawn or Schumer’s best work, for the most part the film is still a fun-filled romp audiences may enjoy. At least it’s better than the trailers make it look, and no one will leave the theater feeling like Hawn and Schumer just snatched of 90 minutes of their time. Still, audiences can’t help but feel slightly disappointed that after 15 years away from the big screen, Hawn couldn’t find a better project in which to make her comeback. “Snatched” might not be a total disaster, but Schumer’s loyal fans will agree it’s no “Trainwreck,” either.

Not Much Worth Seeing in ‘Watch’