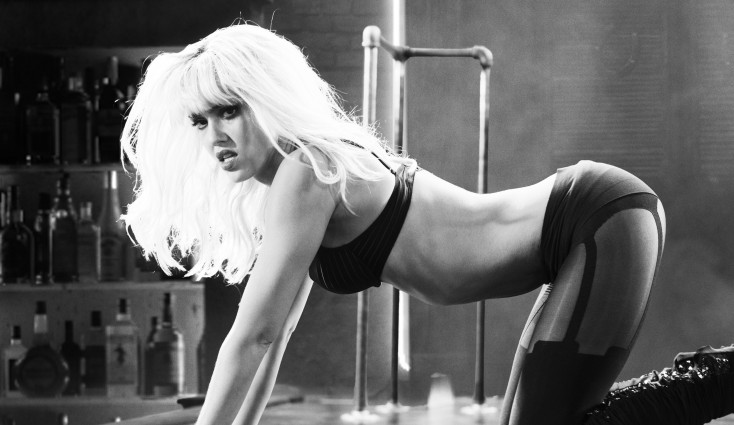 MICKEY ROURKE in SIN CITY: A DAME TO KILL FOR. ©Dimension Films.

Like its 2005 “Sin City” predecessor, the wickedly entertaining and literally (yes, literally) eye-popping “Sin City: A Dame to Kill For” is able to make up for a few unfortunate failings thanks to an abundance of divinely audacious style.

Both of the gleefully lurid outings all but wallow in their glorious garishness. The two movies’ nearly word-for-word and line-for-line reverence for their source material renders them more faithful to the not-so-funnybooks that inspired them than any other comics-to-cinema adaptations. (“Watchmen” came close, but lost major points for changing that story’s ending for the big screen.)

Everything here is so fantastically in-your-face frantic that the films go beyond pulp-inspired camp and neo-noir parody, ending up as crazily hyper-violent live-action cartoons. Pliers break fingers into twisted claws, men crash through windows on at least four occasions and both heads and hands are lopped off with casual abandon.

Two of the four segments, a beautifully brutal pre-credits short and the sucker-for-love title tale, are adapted from existing comics by “Sin City” creator/writer/artist Frank Miller, who wrote the movie’s screenplay. The two other stories are originals that feature some shared fellow citizens of the murder-mad metropolis where “you go in with your eyes open, or you don’t come out at all.”

Co-directors Robert Rodriguez and Miller once again employ elaborate computer-animated backgrounds to put brazenly iconic crime-fiction archetypes (antihero savage, can’t-lose gambler, sentimental cynic, justice-seeking survivor) into hyper-stylized black-and-white settings that are cleverly enhanced with isolated areas of color (red lips, orange fire, blue satin jacket, gold prosthetic eye). Vintage cars including a Corvette convertible, a classic Mustang and even a bullet-nose Tucker are the tough guys’ vehicles of choice. The femme fatales range from a rich man’s devious wife to a band of insanely lethal hookers to an avenging alcoholic exotic dancer, with no less than three of them uttering “you’re the only man I’ve ever loved”-style pronouncements.

Mickey Rourke makes a triumphant return as mayhem-loving “300 pounds of iron” Marv. The nearly superhuman killer appears in all four stories, which take place before his “The Hard Goodbye” segment of the first “Sin City.” Whether slitting the throat of a trust-fund frat boy, lunging through the windshield of a police cruiser to eject a pair of cops from the front seat or shotgunning an entire security team, Marv maintains a deadpan (or at best vaguely amused) attitude that makes his carnage almost comic. “There’s no reason to leave anybody alive,” he says before a particularly horrific home invasion. “Nobody’s innocent.”

Josh Brolin is Dwight McCarthy, a troubled private eye photographer trying to keep his inner monster in check. His irresistible old flame Ava Lord (a deliciously vampy and frequently naked Eva Green) says she needs saving from an abusive rich husband in the movie’s title story, which plays like an outrageously amped-up hard-boiled homage that’s heavy on venetian-blinds shadows and self-hating voiceover. Seductive enough to ensnare any man she meets, Ava is so jadedly self-assured that she blithely answers the phone while being mounted by a lust-crazed detective.

Clive Owen was Dwight in the first movie’s “The Big Fat Kill” segment, which follows “A Dame to Kill For” in the “Sin City” chronology. This movie wastes a perfect opportunity to bring Owen back to replace Brolin (mild spoiler alert) after Dwight has plastic surgery that is supposed to drastically alter his appearance. Instead, Brolin himself plays those later scenes with longer hair and some makeup that shouldn’t make Dwight think he could fool anyone about his identity.

In a more significant casting flaw, Jessica Alba returns as exotic dancer Nancy Callahan, who wants revenge on corrupt Senator Roark (a coolly vicious Powers Boothe) for causing the suicide of her lover and protector John Hartigan (Bruce Willis, appearing in “Sixth Sense”-specter mode). Empty-eyed Alba doesn’t have enough acting ability to make her character even tongue-in-cheek credible, and her dancing lacks anything resembling the entrancing eroticism required by the role.

On a more practical level, Alba’s refusal to do nudity in these films means that Nancy, who always is topless when she appears onstage in the “Sin City” comics (and likewise in Miller’s illustration of her that appears during this movie’s opening credits), and who is supposed to be the star attraction at an extremely-bad-part-of-town dive, always keeps her naughty bits completely covered. The fact that Green’s character Ava is flagrantly nude in multiple scenes, and that Dwight at one point uses a line from the comics to describe Nancy as “showing off everything she’s got,” makes it ridiculous that Alba’s Nancy never reveals anything more than she could get away with displaying at a church pool party.

Also out to take down Senator Roark is new card shark in town Johnny (an enjoyably enthusiastic Joseph Gordon-Levitt), who foolishly ignores a corrupt cop who advises him not to win too much from Roark at high-stakes poker. Johnny’s arm candy Marcie (Julia Garner), a radiant golden girl who stands out from the gritty black-and-white backgrounds like a blond Betty Boop, is as effortlessly sexy as Alba isn’t.

Returning from the first movie are Rosario Dawson as gang leader Gail, and Jaime King in dual roles as twin prostitutes Wendy and Goldie. Dennis Haysbert replaces the late Michael Clarke Duncan as the bass-voiced and built-like-a-vault-door bodyguard Manute, and Jamie Chung takes over for the unavailable-due-to-pregnancy Devon Aoki as the sword-wielding silent assassin known as Deadly Little Miho.

Newcomer Christopher Lloyd is a back-alley doctor who needs to shoot up before practicing surgery, and Lady Gaga cameos as a surprisingly charitable waitress at a diner.

Even non-fans of 3D (and those awful glasses) will marvel at how well the effect works with this movie’s bold comics-art look, from razor-deadly flying cards to explosive shattering glass to an alluring upshot of a skinny-dipping Ava. There’s so much fascinating stuff going on in nearly every frame of the film that watching it sometimes feels like the equivalent of a too-much-candy sugar rush. Thankfully, over-indulgence is a forgivable sin.