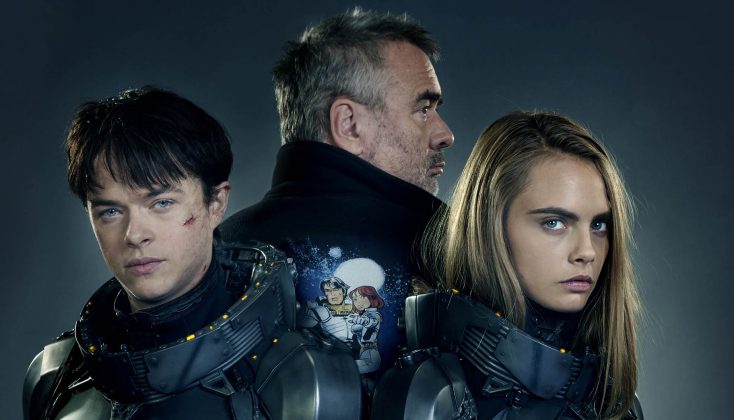 Forget about waiting to catch this dazzlingly spectacular SF-adventure at home. As its fittingly grandiose title implies, “Valerian and The City of a Thousand Planets” contains so many awesome wonders to behold that it deserves to be viewed on the biggest theater screen available ASAP. As much fun as “Guardians of the Galaxy Vol. 2,” more visually stunning than “Avatar” and sexy-cool enough to make “Star Wars” and “Star Trek” seem positively stodgy, it’s this summer’s most must-see movie.

A clever opening montage of historic first meetings between astronauts from different countries, planets and possibly dimensions, set to David Bowie’s “Space Oddity,” is like an amusing short feature unto itself. That’s where we find out that Earth’s original international space station eventually grew so huge with add-ons that it eventually was set free from Earth’s orbit to become a wildly diverse world unto itself called Alpha, aka the City of a Thousand Planets.

That’s where the enthusiastically fearless Major Valerian (Dane DeHaan) and his deadpan delightful sidekick Sgt. Laureline (Cara Delevingne) run into escalating problems with their superiors, various aliens and hatchet-headed killer robots when they bring back a last-of-its-kind creature from their latest mission.

The two confidently competent and effortlessly appealing characters, who originated in French graphic novels by Pierre Christin and Jean-Claude Mézières that were first published 50 years ago, genuinely seem to like and respect each other, despite some occasionally exasperating behavior. When Valerian runs through a wall and ends up floating in space because Laureline accidentally misread a number, his pleasantly unperturbed response to her apology is, “That’s okay. We all make mistakes.”

It’s hard to believe that 20 years have passed since “Valerian” director/screenwriter Luc Besson’s similarly eye-candy delicious “The Fifth Element” was released. Both movies share an outrageous sense of style and a winkingly tongue-in-cheek attitude that paradoxically comes across as innocently sincere. The boyish seven-medals-of-honor Valerian, despite an apparently well-deserved rep as a playboy, is obsessed with getting Laureline to accept his wholesomely heartfelt proposal of marriage. And Delevingne is so good at making the resting-beautiful-face Laureline convincingly sexy, brave and smart that it’s easy to see why Valerian wants to put a ring on her.

Clive Owen is scarily intense as their commander-with-a-secret, Herbie Hancock (yes, the musician) is Alpha’s no-nonsense Defense Minister, and Ethan Hawke is a flamboyantly hustling Paradise Alley pimp. Pop star Rihanna is excellent in a brief role as a shape-changing dancer named Bubble, whose Fosse-esque very-quick-change act transforms her from naughty nurse to French maid to lingerie-clad catwoman, with a few other male fantasies in between.

Special-effects-wise, the ridiculously large variety of alien creatures and the stare-worthy settings are so impressive that the movie would be worth watching even with the sound turned off. There’s such an embarrassment of visual riches—such as when hot-pursuit Valerian runs, flies and swims through numerous Alpha environments in rapid succession—that repeat viewings may be required to fully appreciate them.

There also are sight gags aplenty, such as when Laureline admires the wrong “pretty butterfly,” suffers the result of a repulsively retaliatory roar, and gets crowned in more ways than one. The fast-moving screenplay also manages to work in references to topics such as illegal immigration, genocide and refugees without seeming heavy-handed about it (although the specific number “6,000,000 dead” can’t help having obvious connotations). And if you can’t make it to the beach, there are a couple of incredibly scenic ones here that are the next best thing to a virtual vacation, if you don’t mind the view being ruined by crashing spaceships.

“Valerian and The City of a Thousand Planets” is the kind of fresh, franchise-deserving fun that makes everything else at the multiplex look very been-there, seen-that. This is the kind of huge, extravagant, thrilling and sometimes silly popcorn flick that makes leaving the house actually worth the effort. A Bromosaur on even the biggest TV screen just wouldn’t be the same.