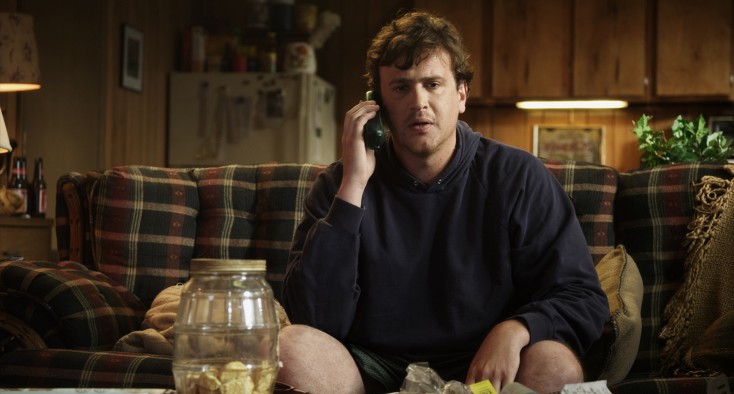 What’s refreshing about this quirky contemporary fable is how relatively raunch-free it is for an R-rated comedy. “Jeff, Who Lives at Home” star Jason Segel’s most recent flick may have been the family friendly “The Muppets,” but he is better known for edgier fare such as “Bad Teacher,” “Forgetting Sarah Marshall” and “Knocked Up.” Compared to those anything-goes outings, a little pot smoking and a few references to offscreen sex here seem positively tame.

Segel is Jeff, a 30-year-old jobless and girlfriendless slacker who still lives in his mother’s Baton Rouge basement. “I can’t help but wonder about my fate, my destiny,” he somberly muses to a hand-held tape recorder while sitting on the toilet.

When he receives a wrong-number call for someone named Kevin, Jeff decides the name must have a destiny-shaping meaning. This conclusion is based on his obsession with the supernatural movie “Signs,” and may also be influenced by the fact that he is doing massive bong hits when he answers the phone.

Across town, his supremely self-involved older brother Pat (Ed Helms) discovers that buying a new Porsche behind his wife’s back is the breaking point in their rocky marriage. Meanwhile, Jeff and Pat’s widowed mother Sharon (Susan Sarandon) is receiving secret-admirer text messages at work. All Sharon wants Jeff to do for her birthday is buy some wood glue to fix a slat in a shutter door, a task that sets a series of entertainingly improbable events in motion.

The way that all three family members’ situations merge in a day full of unlikely coincidences is genuinely charming. Helms manages to be both hilariously manic and movingly miserable as the hyper-frustrated

Pat. He refers to Jeff as a Sasquatch, has a “business meeting” at Hooters and rightly suspects that wife Linda (Judy Greer of “The Descendants”) is having an affair.

Segel makes gentle-giant Jeff the easygoing opposite of Pat. Jeff is both innocently trusting and easily intimidated, but unwavering in his faith that something important is in store for him. His belief that “everyone and everything is interconnected” has a dramatic payoff that’s unexpectedly effective.

Sarandon is excellent as the timidly hopeful Sharon, who at first is cynically dubious about her unknown admirer. “I’m old and getting flabby,” she texts, but her skepticism turns to girlish fantasizing when her cyber-suitor disagrees. Most of her scenes take place apart from her sons, at a desk job where her closest confidante is a co-worker named Carol (Rae Dawn Chong).

Both movies mix lightweight laughs (Jeff awkwardly attempting to avoid detection while shadowing a stranger, and later trying to hide his “enormous” bulk behind a candy machine) and darker emotional beats

(Jeff desolately telling Pat during a cemetery showdown that “you and mom will never understand me, and you’re all I have left”).

Most of the movie is shot with the kind of reality-TV awkward zooms, fast push-ins to close-ups and handheld casualness, which works well with the indie-odd material.

This magical little movie about a likable loser whose bus ride to the store turns into a life-altering quest is one of the best movies so far this year.

[Rating: 4 stars]
Tags:Jason Segel, Jeff Who Lives at Home, Review
Previous PostDisney Unmasks First Look at ‘The Lone Ranger’
Next PostJennifer Lawrence Steps Up to the Plate for ‘The Hunger Games’