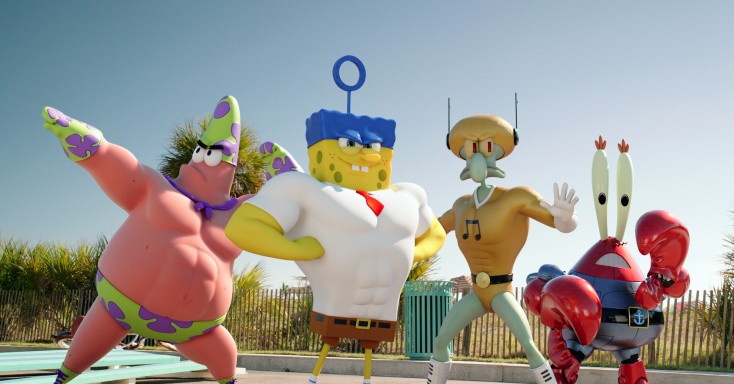 After 16 years of dwelling in the 2-D animated world of Bikini Bottom, silly, hyperactive burger slinger SpongeBob SquarePants surfaces to the live action world in “The SpongeBob Movie: Sponge Out of Water 3-D.”

The 3-D adventure features all of the stars of the long-running Nickelodeon cartoon series, including the titular character along with his best friend Patrick, scientist squirrel Sandy, sardonic Squidward, his crabby boss Mr. Krabs, conniving Plankton and the rest of the crustacean inhabitants from beneath the sea. It also introduces a new human character in the form of Burger Beard, played with dastardly menace by Antonio Banderas.[private]

For kids and kid-hearted fans of the series, “Sponge Out of Water” offers a colorful, fast-paced, poop-joke-filled adventure. The ante is upped when the gang surfaces (about an hour into the 93-minute film) to the human world. That’s when they take on superhero powers (and a new look), thanks to a fancy time machine that Plankton’s trusty computer companion has created.

SquarePants & Co. are on a mission to retrieve Mr. Krabs’ secret recipe for his delicious Krabby Patty burgers, which has been stolen by Burger Beard. Without the recipe, the busy restaurant cannot survive, and without access to their favorite food the entire world of Bikini Bottom is thrown into chaos. Even mean little Plankton, who was plotting to steal the recipe to use at his unpopular restaurant, realizes that to get things back to normal, the missing recipe must be found and returned his nemesis. He also discovers that he has to help out as part of team to retrieve it.

While “Sponge Out of Water” is mostly a goofy action-adventure with childish humor and occasional songs, it ultimately also offers a lesson about the importance of teamwork to accomplish a goal. The 3-D effect largely enhances the movie-going experience. It is used to its greatest effect when SpongeBob, Patrick and the others are traveling through time amidst a kaleidoscope effect. The seascapes of Bikini Bottom are stunning in the 3-D format.

While it is fun watching the cartoon characters in their “real world” form, it almost becomes too “Transformers” or “Power Ranger”-like when SpongeBob, Patrick and the others get their superpowers and muscular physiques. The climactic showdown with Burger Beard also goes on a bit too long.

The voice cast from the TV series (and previous feature film) is on hand. Tom Kenny voices optimistic, bubble-loving SpongeBob while Bill Fagerbakke delivers the voice of slow-witted but loyal starfish Patrick. Rodger Bumpass is the sardonic Squidward. As Sandy, Carolyn Lawrence is the only female in the group, and a squirrel to boot. Clancy Brown is the crusty capitalist Mr. Krabs and Mr. Lawrence is the plotting Plankton, a tiny sea creature with a Napoleon complex.

Paul Tibbitt directs the comedy, with Mike Mitchell directing the live-action sequences, from a story by Tibbitt and executive producer Stephen Hillenburg.

Banderas’ performance as the thieving Burger Beard is equal parts Captain Jack (from “The Pirates of the Caribbean”) and his egotistical “Shrek” persona Puss-in-Boots. Acting opposite mostly animated creatures can’t be easy, but he pulls it off in a fun, over-the-top way.

SpongeBob fans won’t be disappointed. Parents already know if they can tolerate (or even adore) SpongeBob as much as their kids do. “The Sponge-Bob Movie: Sponge out of Water 3-D” simply offers a longer, grander-scale, 3-D version of what you’re familiar with.[/private]