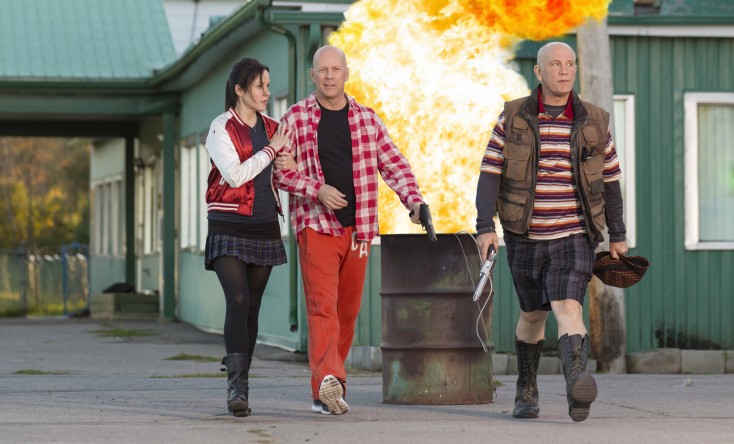 More irritatingly obnoxious than all three of the winkingly self-satisfied “Ocean’s” movies rolled into one, the senior citizen star-cluster “RED 2” also seems as awkwardly redundant as a twice-told Alzheimer’s sufferer’s story. That’s because certain plot points of this two-hours-that-seem-like-four slog have way too much in common with those of Bruce Willis’ last movie, the similarly insufferable “A Good Day to Die Hard.”

“Retired, Extremely Dangerous” former secret agent Frank Moses (Willis), who has settled into a life of Costco-shopping suburban normality, reteams with the absurdly eccentric but justifiably paranoid Marvin Boggs (John Malkovich) when the two are framed for taking part in a covert operation called Nightshade. Trouble is, they’ve never heard of Nightshade.

Targeted by murderous US government agent Jack Horton (Neal McDonough) and Korean hitman-for-hire Han (Byung Hun Lee), Frank and Marvin go on an international quest for clues in a stolen jet. Helen Mirren returns from the first movie as MI-6 agent Victoria Justice, who is casual enough about her lethal profession that she calmly dissolves a body with acid while chatting on the phone. Catherine Zeta-Jones is the cartoonishly carnal Russian agent Katja, who can bend former flame Frank to her will so easily that Marvin refers to her as his kryptonite. Anthony Hopkins plays an absent-minded inventor who left the most dangerous weapon in the world somewhere in Moscow during the Cold War.

Those better-than-this-junk talents slum their way through their silly scenes with as little commitment as skit guest stars on a Bob Hope special (a reference that only audience members as old as the actors may appreciate). Mirren is amusing to see in a guns-blazing high-speed shootout simply for the bizarre novelty of the thing, and Malkovich is one-note dotty as Marvin. Willis does his usual detached irony act, indestructibly bouncing back from every extended beating with aloofly John McClane-ish persistence.

Returning as Frank’s wide-eyed and ditzy girlfriend Sarah Ross, the movie’s very weakest link is Mary-Louise Parker, who mugs for the cameras more shamelessly than Julia Roberts at her hammiest. You don’t have to be a radical feminist to think there’s something equally offensive and disturbing about a nearly 50-year-old woman trying to come off like a 15-year-old dumb bunny. Eager to get in on the run-and-gun action instead of sitting things out in a safe house, Sarah consistently fidgets, flirts, and fouls things up with all the subtle comedic finesse of a pie in the face.

The screenplay includes plot twists that would be predictable even if they hadn’t already been seen in “A Good Day to Die Hard.” Writers Jon and Erich Hoeber also wrote the nominally better “RED,” but that was adapted from the storyline of a comic book (by Warren Ellis and Cully Hamner). Working on their own, the Hoebers serve up the all-filler equivalent of Hamburger Helper without the hamburger. Also, rest assured that when someone utters a 007-style quip, you will hear the same zinger again from another character exactly when you expect it.

Director Dean Parisot (“Galaxy Quest,” “Fun With Dick and Jane”) has an annoying habit of cutting away from action shots too quickly. Scenes such as a martial-arts convenience-store melee and a car chase that involves a Lotus, a Range Rover and a tractor-trailer include lots of good bits that don’t mesh very well, for example.

The movie’s biggest sin, though, is its insulting “Expendables”-like assumption that merely grouping a bunch of twilight-years talents in an action movie automatically makes it endearing. Embarrassingly campy, lazy, corny and pointless, “RED 2” is one of the worst movies of the year.