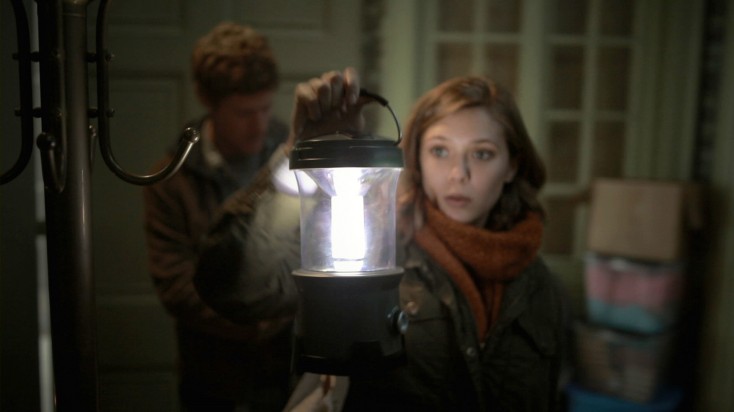 *****NOTE TO EDITORS: The movie’s release date is Friday, March 9, and reviews are not allowed to run until the week of release.*****

The first gimmick of this moody, disturbing and unusually somber horror flick is that it unfolds in 88 minutes of real time, as an increasingly terrified young woman named Sarah (Elizabeth Olsen) is menaced by things that go bump in her house and in her head.

The second gimmick is that the movie has been artfully assembled to appear as if it were shot in one continuous take, with no edits or cutaways. That stunt, most memorably employed in Alfred Hitchcock’s 1948 drawing-room thriller “Rope,” sounds more interesting than it plays. The technically impressive feat eventually becomes a tiresome restriction. When directors Chris Kentis and Laura Lau give realism a rest by using a slightly pixelated style during a panic-stricken run, the brief change comes as a refreshing relief.

Ironically, most of the scares in “Silent House” are sound-related—the sort perfected at a different haunted house almost 50 years ago. As in 1963’s classic “The Haunting,” thumps, creaks and other noises heard offscreen are the cause of more anxiety and chills than the things we actually see.

The plot couldn’t be more simple. Sarah and her father John (Adam Trese) are preparing to leave an isolated old vacation home where they have been staying with Sarah’s surly Uncle Peter (Eric Sheffer Stevens). The three-story house with no electricity has been vandalized to such an extent that the windows are boarded up and padlocks secure every door. That means the interior is so dark that flashlights are required even during the day, and leaving the house without a key is as difficult as getting inside.

When Uncle Peter leaves to go to town, Sarah finds her father bloody and unconscious on an upstairs floor. Then she keeps hearing—and occasionally seeing—things that turn her into a scrambling, traumatized hysteric.

The illusion of continuous-shot camerawork throughout is excellent, keeping Sarah onscreen for nearly every second of the film. Besides leading, circling and following Sarah, the camera smoothly glides in and out of a car and other tight spaces. Dim lighting adds to the eerie ambience of the house, which has a bygone-days basement full of ductwork and pipes that would be creepy even without an unknown intruder lurking around the corner.

Director Kentis and co-director/writer Lau previously teamed on 2003’s excellent “Open Water,” another movie that presented interesting production challenges. (The protagonists of that film spent most of their time treading water and hoping not to get eaten by sharks.)

“Silent House” is a remake of the 2010 Uruguayan film “La Casa Muda,” which used the same continuous-shot format.

Olsen, who was so good in last year’s similarly unsettling “Martha Marcy May Marlene” that many thought she deserved an Oscar nomination, effectively portrays Sarah’s psychological descent into wild-eyed paranoid panic. But the filmmakers’ decision to put her in a low-cut white tank top that shows off her frankly spectacular “Olsen twins,” and to employ frequent down-blouse shots that ogle those assets, seems odd for a movie that aspires to be more than a cheesy exploitation flick.

The movie disappoints in its last act partly by not living up to the theater-of-the-mind expectations previous scenes have created. Characters begin behaving in ways that are horror-cliche hokey, hallucinatory images look like second-rate “The Shining” swipes and the final twist is an unsatisfying storytelling device roughly on a par with “it was all a dream.” Discussions by viewers afterward are likely to include debate over what exactly happened, because the fate of every character is left frustratingly unclear.

That’s a shame, because this offbeat and engrossing cinematic stunt deserved a more thoughtful and less ambiguous payoff.