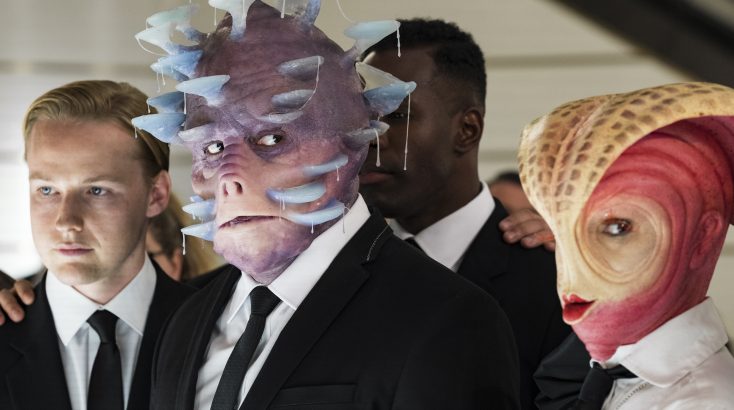 With Will Smith off granting wishes in “Aladdin,” the fate of the world rests on two Asgardians’ shoulders in the fourth installment of Sony Pictures’ “Men in Black” franchise, “Men in Black: International.”

Chris Hemsworth (Thor in the Marvel Cinematic Universe) and Tessa Thompson (Valkyrie in the Marvel Cinematic Universe) don the signature black suit, white shirt and skinny black tie this time around, with Hemsworth stepping into Tommy Lee Jones’ role as the alien-fighting pro and Thompson playing Smith’s part as the Men in Black’s newest recruit. Although Thompson’s Agent M (for Molly) may be new to the scene, this isn’t her first time around aliens. She’s spent most of her life searching for the mysterious Men in Black after an encounter with an alien in her house as a kid. Assuming she was asleep in her room, the Men in Black on the scene only erased her parents’ memories of their furry blue visitor while Molly helped him escape.

When Molly is sent to London by Agent O (Emma Thompson, reprising her role from “Men in Black 3”) as a probationary agent, she assertively joins Agent H’s (Hemsworth) latest case to protect an alien named Vungus (voiced by Kayvan Novak, “Syriana”) whose life is in danger. Although the two fail in their mission, Agent M quickly finds out why Vungus had a target on his back—he was in possession of the most destructive weapon ever made: a blaster cannon powered by a super-compressed star. Vungus secretly passes the weapon, which is stored in a purple crystal, to Agent M before he dies, telling her that Agent H has changed since saving the world from a parasitic intergalactic force called the Hive a few years ago alongside the London Men in Black division’s boss, Agent High T (Liam Neeson, the “Taken” movies). Vungus no longer trusts Agent H out of fear that the London chapter has been compromised by someone within the organization.

Although screenwriters Matt Holloway and Art Marcum (“Iron Man,” “Punisher: War Zone”) try to keep viewers guessing as to who the mole is in the London division, most people can probably figure out the big reveal long before the movie’s climax. Nevertheless, the journey to get to that reveal is still fairly entertaining, thanks in part to the natural chemistry Hemsworth and Thompson already share from Disney’s Marvel movies. Holloway and Marcum also pepper the script with enough nods to the first three films in the “Men in Black” franchise to keep longtime fans happy, including a requisite appearance from Frank the Pug (voiced again by Tim Blaney, who also voiced Number 5 in the “Short Circuit” films) and updated video footage of real-life celebrities outed as aliens currently under surveillance by the Men in Black.

Academy Award nominee Kumail Nanjiani (“The Big Sick”) also joins the Men in Black family as the voice of the franchise’s latest endearing alien sidekick, Pawny. Although the character could have easily seemed forced into the story just to appease kids, Pawny surprisingly never once comes across as annoying or unnecessary. This is a testament to Nanjiani’s likeability more than anything else, which basically sums up the film in a nutshell.

Nothing about “Men in Black: International” is outstanding or significantly noteworthy. The special effects are fine, though far from groundbreaking (although the shape-shifting alien twins played by Laurent and Larry Bourgeois do have a couple of visually stunning moments). The story doesn’t pack the surprising emotional punch of 2012’s “Men in Black 3,” nor is it as fun as 1997’s “Men in Black.” Hemsworth supplies a few chuckles, but isn’t nearly as comical as he was in “Thor: Ragnarok” or even “Ghostbusters.” Truthfully, there’s no real reason for “Men in Black: International” to exist, yet it’s entertaining and likeable enough for its near two-hour duration that, should there be a sequel, audiences likely will want to check it out.

While there’s no crime in being a fun but ultimately fluffy popcorn flick, fans of both Hemsworth and “Men in Black” can’t help but leave the theater feeling disappointed with “Men in Black: International” and ambivalent about what transpires next with the Men (and Women) in Black. Maybe director F. Gary Gray (“Straight Outta Compton,” “The Fate of the Furious”) will consider it a win that viewers won’t want their memories of the film erased by the Men in Black’s signature neuralyzer, but with hardly any truly memorable moments in the movie, it’s likely audiences will forget all about the uninspired “Men in Black: International” by themselves as time goes on.