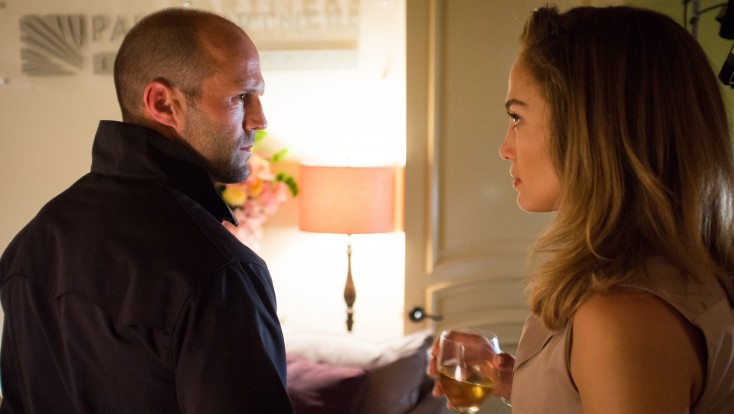 NOTE TO EDITORS: Reviews are embargoed for publication until Friday, January 25

The first thing we see career criminal Parker (Jason Statham) do in the movie bearing his one-word name is park a car, which seems a bit on the nose. Unfortunately, the rest of the movie is all over the road, veering from film noir nastiness to something vaguely resembling bad romantic comedy.

Parker appeared in two dozen hard-boiled crime novels by Donald E. Westlake (using the pseudonym Richard Stark) between 1962 and the author’s death in 2008. He has been portrayed previously on film as male (including Lee Marvin in 1967’s “Point Blank” and Robert Duvall in 1973’s “The Outfit”), female (Anna Karina in 1966’s “Made in USA”), black (Jim Brown in 1968’s “The Split”) and French (Michel Constantin in 1967’s “Mise à sac”). In “Parker,” the first movie to use the character’s name from the books, the never-say-die antihero apparently is a British expat operating in present-day America.

Statham is sufficiently steely eyed to appear believably contemptuous of his unprofessional crew in the sloppily executed heist that opens the film. Left for dead afterward, he tracks his betrayers to ritzy Palm Beach, Florida, where they plan to pull off a spectacular jewel robbery.

Director Taylor Hackford (“An Officer and a Gentleman,” “Ray”) makes a huge mistake by letting Lopez portray Leslie as a half-her-age halfwit. Although she delivers a painfully awkward monolog about being a pushing-40 divorcee with bills to pay, her character shows none of the road miles or desperation that would make us believe she might turn to crime.

Statham is adequate as Parker, especially during action scenes. But he is sabotaged by the script when he has to deliver lines like an achingly overwritten spiel to a panic-stricken security guard during a robbery.

If Hackford had more faith in his material, it would have been interesting to see this same plot executed without any distracting tongue-in-cheekiness that takes us out of the story. A more mature, bitter and cynical Leslie would have been a better foil for the no-nonsense Parker. Instead we get a Leslie who bizarrely has no suitors except a goofy cop despite having a MILF-centerfold body, who works in an office with stock phonies and who goes into ridiculous hysterics at the sight of blood. In a scene that makes no sense whatsoever, she decides to show up at the bad guys’ hideout to peep wide-eyed through their windows.

That kind of Lucy Ricardo lightness has no place in an otherwise noirish tale that includes savage beatings, deadly shootings and a dagger that very graphically goes in and then out of a palm. Also, Parker’s head is bloodied so often that people should recoil in horror at the sight of his bruised and battered face, but somehow he manages to clean up quite nicely after each attack.

Supporting players include gruff and grumbling Nick Nolte as Parker’s father figure and father-in-law. Parker’s wife Claire (Emma Booth) suffers from the same lack of seasoning as Leslie, appearing too young, naive and unaffected by Parker’s world to be a believable mate for him. Members of Parker’s cartoonishly nasty backstabbing crew include Michael Chiklis, Michael Hauptman and Clifton Collins, Jr.

Parker himself is a good character, a violent thief who lives by a code of ethics and some rigid core principles. “When I say I’ll do something, I always follow through,” he notes at one point, and that’s true even if it puts those close to him in danger. Without a trace of irony, he goes after his former gang with the justification that “civilized people need to follow rules. I’m just gonna put things right.”

Unfortunately, “Parker” the movie is so inconsistent that it’s hard to imagine this incarnation of the character becoming a franchise. Maybe the next model will be more roadworthy.