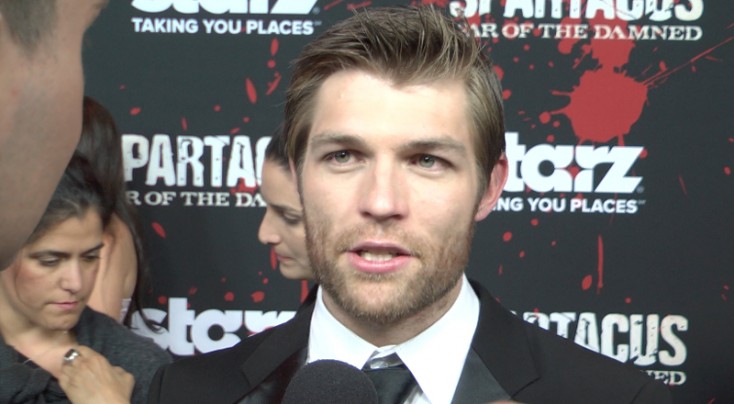 The cast of “Spartacus: War of the Damned” on the red carpet of the Los Angeles Premiere screening of the show. ©Peter Gonzaga/Front Row Features Wire.

HOLLYWOOD—Spartans took their war against Rome to the streets of Los Angeles as the Starz original series “Spartacus: War of the Damned” held its Los Angeles premiere at the Regal Cinemeas L.A. Live in Downtown Los Angeles Tuesday.

Celebrating their final season with a mix of emotions, the main cast members came together to pose for photographers and talk to the media on the red carpet.

For Manu Bennett (who plays Crixus), it was a moment of reflection as he talked about Andy Whitfield, who played the original Spartacus on the series and died of cancer in 2011.

“I just want to say hello to his family,” said Bennett. “Hey Lucy. Hey Indigo. Your father is our Spartacus always and still. He is with us here now.”

He added, “As a person, as a father, a human being, it really accentuated the tragedy involved with cancer. Somebody so young and so talented could have their dreams and their life taken away like that. It something that was very tough for us and we had to work diligently through it.”

“I had a big responsibility to fill the legacy of Andy Whitfield last season,” he said. “It was a difficult journey for me.”

It was also hard for the other actors who worked closely with Whitfield. As the cast moves on to the final season of the show, many echoed that there will be more blood and more fights.

According to former “Xena” star Lucy Lawless, who plays Lucretia on the series, “You’re going to be on the floor in puddles. It’s gonna shock you and the people who walk away from it are triumphant. It’s amazing!”

Full interview clips from the red carpet courtesy of Pacific Rim Video are listed below: