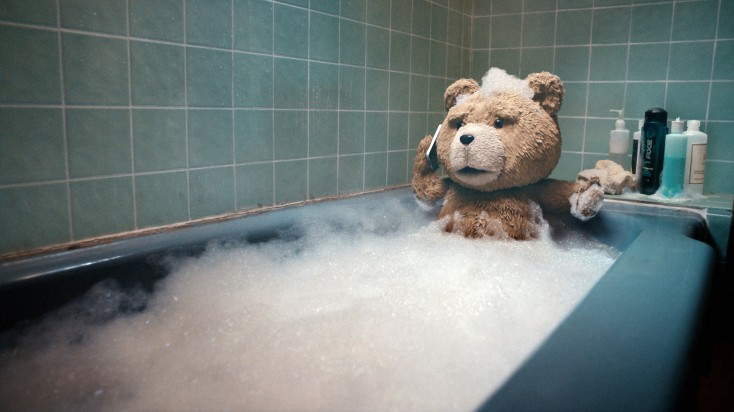 Family Guy creator SETH MACFARLANE brings his boundary-pushing brand of humor to the big screen for the first time as writer, director and voice star of “Ted.” ©Universal Studios/Tippett Studio.

The filthy fairy tale’s rapid-fire sitcomisms and desperately endless pop-culture references are instantly recognizable as the work of the “Family Guy,” “American Dad!” and “The Cleveland Show” creator. The live-action “Ted” amps things up with several of the seven words you can’t say on TV, a whole lot of bong hits and a single shot of a bare-breasted female, which apparently is enough to qualify for an R rating.

Narrator Patrick Stewart introduces us to friendless suburban seven-year-old John Bennett, whose 1985 Christmas wish that his new teddy bear could talk comes true. Unlike the lifelong troublemaking imaginary friend who was visible only to Phoebe Cates in 1991’s “Drop Dead Fred,” Ted is alive for everyone to see. His brief celebrity status even gets him on “The Tonight Show,” where he interacts in a “Forrest Gump”-seamless segment with Johnny Carson.

A montage of photos during the opening credits spans the next 27 years, during which John grows up but Ted only gets dirtier (in both senses of the word). Cut to the present, where John (Mark Wahlberg) is getting baked on the sofa with the now outrageously foul-mouthed Ted (voiced by MacFarlane, and sounding pretty much identical to “Family Guy”‘s Peter Griffin). Both are unmotivated Boston-accented slackers, a fact that is beginning to annoy John’s respectable live-in girlfriend Lori (Mila Kunis).

The last straw for Lori comes when she and John arrive home from a romantic dinner to find Ted entertaining four hookers, one of whom has taken a truth-or-dare dump on the living room floor. Ted moves into a cheap apartment, takes a grocery store job and gets a trashy girlfriend. He and John continue seeing each other on the sly to engage in various forms of uncivilized behavior.

Giovanni Ribisi has a small role as a creepily obsessed Ted fan named Donny, who offers to buy the bear for $6,000 in railroad bonds as a playmate for his obnoxious son. When that doesn’t work out, he takes a more direct and less legal approach.

Computer-animated Ted is impressively convincing as a living and talking stuffed animal, although he looks a little odd when running. While it may be ridiculous to mention logic problems in a movie like this, two are hard to ignore. Although Ted is strong enough to trash an entire motel room and beat up John in a knock-down fight after being insulted, he puts up no struggle whatsoever against the villainous Donny later. Also, it seems odd that the stuffed-with-fluff Ted doesn’t simply jump from a tall structure to escape the pursuing Donny, who would have far less chance of surviving such a fall.

Sam J. Jones of 1980’s “Flash Gordon,” a movie John and Ted adore, makes what may be the year’s strangest cameo as a bizarre version of himself. Singer Norah Jones admits to being one of Ted’s former conquests, and “Seinfeld”‘s Patrick Warburton appears as John’s sexually confused coworker.

Stuffed with MacFarlane’s crude brand of easy-joke humor, “Ted” is just the thing for anyone who thinks movies need more crassness, profanity and sappy last-act sentimentality.