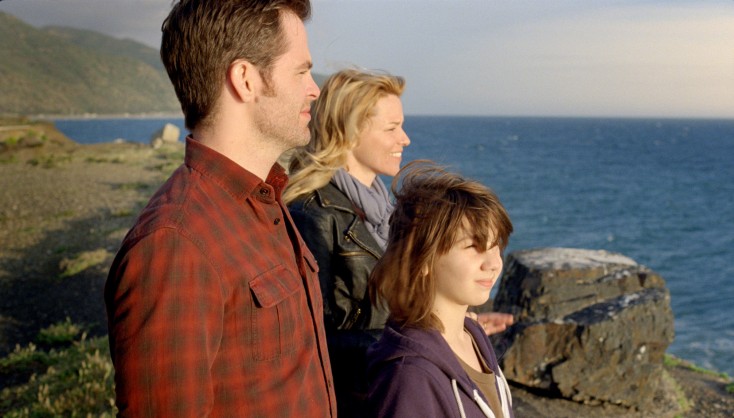 Sam (Chris Pine) gets to know Frankie (Elizabeth Banks) the sister he has just discovered and her son Josh (Michael DâAddario), while trying to figure out how to tell her they are siblings in the DreamWorks drama/comedy “People Like Us”.
©Dreamworks LLC.

The two biggest problems with “People Like Us” are its meaninglessly generic title and a hopelessly contrived premise. The movie’s biggest asset is Elizabeth Banks, as the sexy but struggling single mother of a disrespectful semi-delinquent son.

The plot drawback is the same one that made “The Lucky One” so annoying earlier this year. Chris Pine (the rebooted “Star Trek”‘s new Captain Kirk) is Sam, the resentful son of a former big-time record producer. Dad dies and leaves Sam nothing more than an extensive vinyl collection, while Sam’s brittle blond mom Lillian (Michelle Pfeiffer) gets the house and cars. Dead dad’s lawyer later slips instructions to Sam about giving $150,000 in hundred-dollar bills to a mystery woman and her young son.

Cash-strapped Sam is so financially desperate he considers keeping his mouth shut and making off with the money. But curiosity compels him to seek out the stranger to see what’s up. That’s where “People Like Us” starts going wrong.

Frankie (Banks) turns out to be a busty miniskirted beauty who wears a leather biker jacket in nearly every scene. Her tween-age son Josh (Michael Hall D’Addario) is a fatherless semi-delinquent who has just blown up his school’s swimming pool.

Considering that Sam’s dead dad was a lifelong Hollywood music-industry hipster, anyone’s automatic assumption would be that Frankie was one of his age-inappropriate former lovers, making her son Sam’s half-brother. Bizarrely, Sam never considers that very obvious possibility. Instead, he leaps to the conclusion that Frankie must be dead dad’s secret love child, which turns out to be true. Very strange.

Like the two main characters in “The Lucky One,” Sam strikes up a close friendship with Frankie without letting her know his real purpose in seeking her out. (In the earlier movie, a soldier tracks down a beautiful woman who is in a photo he found but doesn’t reveal that their meeting was anything but accidental.) This means viewers spend most of the movie waiting for things to blow up when the awkward truth is revealed.

The contrivance is infinitely more aggravating here than in “The Lucky One,” however, because “People Like Us” is too timid to take Sam and Frankie’s relationship to its logical, somewhat creepy but at least potentially interesting next level. Frankie obviously is falling in love with the stranger she doesn’t know is her half-brother, and Sam seems attracted to her as well. Sam’s live-in girlfriend Hannah (Olivia Wilde) is back home in New York during the several weeks Sam spends in Los Angeles. The movie squanders the opportunity to make things genuinely complicated, however, by keeping any hint of incest at bay.

“People Like Us” feels like the kind of low-budget, low-prospects personal project that Hollywood allows successful creators to produce in between blockbusters to keep them happy. The movie was directed by Alex Kurtzman and written by Kurtzman, Roberto Orci and Jody Lambert. Kurtzman and Orci were writers on “Mission Impossible: III,” 2009’s “Star Trek” and two Transformers titles.

Frustrating, flat and phony, “People Like Us” indicates the duo would be better off sticking to giant robots, super spies and science fiction.

‘I Feel Pretty’ Needs to Work on Itself