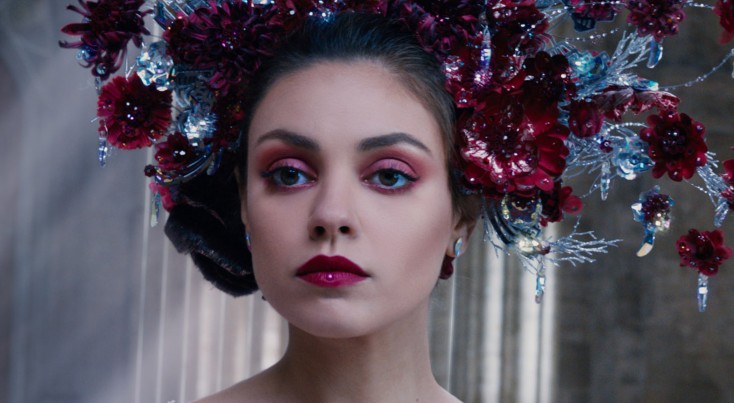 Andy and Lana Wachowski, the creators of “The Matrix,” give us a Cinderella-in-space story starring Mila Kunis and Channing Tatum. Is it hot, horrible or in-between?

If you were cleaning toilets for a living and a cute, buff but weird, humanoid, pointy-eared space alien literally swooped you up and told you you were royalty on another planet, would you just pass out on the spot, laugh or go along for the ride?

Unhappy Jupiter Jones (Mila Kunis) a product of English and Russian parents, lives in Chicago, cleans houses for room and board with her demanding Russian cousins and hates her life. Meanwhile, members of a royal race tour a planet they have “harvested.” Notably, there isn’t a single living soul left on it. Next up? Earth. Only, which among three royals actually own it? Rumors of the existence of an Earth-born, genetic match to their once powerful, murdered queen cause worry. Can she challenge for ownership?

A group of intergalactic bounty hunters arrives on Earth in search of Jupiter. A buff hottie with pointed ears named Caine (Tatum), who wears cool anti-gravity boots that blast him off the ground and allow him to glide/skate the skyways, rescues Jupiter from those assigned to kill her. They end up at a farm where Caine’s fellow ex-soldier Stinger (Sean Bean) calls Jupiter “your majesty,” and explains that she is heir to a rich off-world family. He also informs her that she is in imminent danger.

Despite the good guys’ best efforts, Jupiter is snatched by the baddie bounty hunters and ends up on a mystery planet where the infighting among the royals is revealed. Mentally-twisted oldest bro Balem (Eddie Redmayne, speaking as if he has a sore throat) wants Jupiter dead, princess Kalique (Tuppence Middleton), reveals the family secret of eternal life and tries to get Jupiter to think like a royal. What do the peasants on these planets matter, anyway? The youngest royal, handsome Titus (“Romeo and Juliet’s” Douglas Booth), schemes to get Jupiter to sign over control of Earth to him. Seems that the semi-eternal life of the clan comes from the humanoid populations they control and everybody wants to be head honcho of this lucrative “business.”

Jupiter is a pawn in a widespread power play and it’s up to Caine, who has fallen for her, his buddies and a helpful police force called the Aegis to do tons of last minute rescuing. As a planet is destroyed, will any of the royals or Jupiter survive? Will she do her queenly duty or go back home to Earth with her wolf-human hybrid boyfriend Caine in tow?

”Jupiter Ascending” looks cool in 3-D. The production design (interesting weapons, sets, CGI planets and ships), costume design, make up and creature shop creations are all colorful, original for the most part and fun to look at. If you love video game fight action, you’ll enjoy the many, many stunts and fight scenes. There is a funny scene in which Jupiter tries to register her queenly title in a bureaucratic government office that makes standing in line to get a driver’s license at the DMV seem like an easy no-brainer. Look for director/actor Terry Gilliam as a bureaucrat in the scene and…well, that’s about it for the pros. Now, the cons…

”Jupiter Ascending” plays like it was much longer and got chopped up and edited down for time. Some explanation, character development and story got lost in the process. A bit of what is going on is explained to Jupiter and thus, to the audience but much more is vaguely hinted at. There are so many aliens with so many agendas describing goings-on in made up words we never heard before that the audience is left befuddled.

The plot is so repetitive that it’s always predictable. Jupiter is just about to die, get married, abdicate the throne, whatever and Caine and his friends swoop in to the rescue. Then, the big battle ensues and it’s on to the next damsel in distress scenario. What happened to strong women kicking butt and saving not only themselves but the guys in their life once in a while?

There is a weird “Dune” meets “Flash Gordon” by way of “Brazil” vibe that is, no doubt, the Wachowskis’ tribute to some of their favorite films but it’s an odd, uneasy combo. However, if you are a fan of Tatum or Kunis, and just like a little romance (very little… they kiss only once) mixed in with your video game, sci-fi action and aren’t too invested in exactly what is going on, then you might enjoy the film.