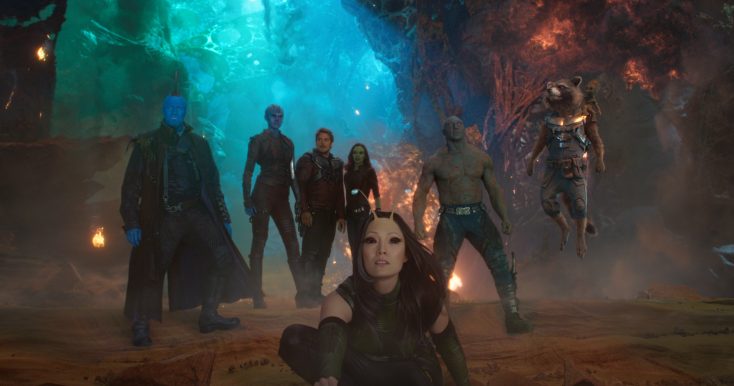 Marvel always has been the best there is at what they do, and the insanely entertaining “Guardians of the Galaxy Vol. 2” is the studio’s most awesomely enjoyable comic-book-inspired outing ever. Funny, frantic and featuring a more sweetly satisfying storyline than 2014’s first “Guardians” adventure, this silly space opera is so gloriously day-glo gorgeous that it should be seen on the biggest screen available, as soon as possible, and at least twice. It’s that good.

Returning director James Gunn, who co-wrote the first “Guardians” screenplay but gets sole credit here, gives each of the team’s colorful characters plenty of screen time to shine. That’s a good thing, too, because it’s hard to pick a favorite from this likable band of merry mercenary misfits.

Wait, who am I kidding? Everyone in the universe is guaranteed to fall in love with the tiny and ridiculously cute Baby Groot, whose repeated pronouncement “I am Groot” is again voiced by Vin Diesel. Even a repulsive and murderous turncoat named Taserface (Chris Sullivan) has to admit that Groot is “too adorable to kill.”

After a brief 1980 flashback opening, Gunn lets a vigorously spectacular battle between most of the Guardians and a Lovecraftianly grotesque monstrosity—a scene big enough to be the final-act grand spectacle of any other superhero movie—play out in the background, focusing instead on little Groot’s oblivious dancing amid all the crazy chaos. Now that’s confidence.

The main plot brings good-natured Guardians leader Peter Quill (Chris Pratt), sometimes known as Star-Lord, together with his unknown and extraterrestrial deadbeat dad (a perfectly cast Kurt Russell). That cheerful cosmic wayfarer, who goes by the unlikely but appropriate moniker Ego, is accompanied by an antenna-adorned empath named Mantis (Pom Klementieff) who can get in touch with everyone’s feelings by touching them.

Although Mantis is childlike, big-eyed and meek, her unexpected soulmate turns out to be the gleefully loud and hilariously filter-free Drax (Dave Bautista), a bare-chested tattooed muscleman whose enthusiastic honesty brings the movie’s biggest laughs. Drax doesn’t like wearing a rocket-pack harness because it hurts his sensitive nipples, he explains his gagging during a bedroom encounter by blithely announcing that “I’m imagining being with you physically,” and his proudly unembarrassed description of what his bowels produce may make you lose control of yours.

Also along for the ride again are the amusingly obnoxious and very weapons proficient Rocket Raccoon (voiced by Bradley Cooper), and Peter’s unspoken-romance-averse would-be girlfriend Gamora (Zoe Saldana). Michael Rooker is flat-out fantastic and surprisingly touching as the blue-skinned bad-ass Yondu, whose relationship with Peter turns out to be more intriguingly complicated than the kidnapper/hostage scenario laid out in the first movie.

The fascinating characters, uniformly excellent performances and clever story here would make this flick a keeper even on a Roger Corman budget with street clothes and cardboard props, but thankfully Those In Charge had more expensive tastes. The amazing costumes, completely convincing CGI characters and outrageously elaborate settings are stunningly stareworthy. A space battle in a “quantum asteroid field” plays out like an impossible-odds arcade game, and Ego’s exotic paradise planet is a luxuriously hallucinogenic Xanadu.

Because this sequel has a lot more humor than other Marvel movies, it gets away with things like having every alien race somehow speak colloquial English (and use words such as “taser”). A visual gag about Rocket piloting a starship through no less than 700 hyperspace jumps in one go is physics-defyingly funny, especially considering the cartoonishly Tex-Avery-distorted faces of everyone aboard during the trip. And an extended series of questions about whether anyone might have a piece of much-needed tape during an exploding-planet skirmish is a deadpan delight.

The movie even manages to pull off some genuinely heartfelt family-dynamics moments that don’t seem at all out of place. One of them is accompanied by a perfectly poignant golden oldie that may even bring tears.

In a perfect world (or galaxy, even), “Guardians of the Galaxy Vol. 2” would be the first Marvel Studios movie to receive a Best Picture Oscar nomination. Sure, it’s goofy and garish, but it’s also irresistibly appealing, which has to count for something. I can’t imagine a more thoroughly enchanting or dazzlingly beautiful movie this year.