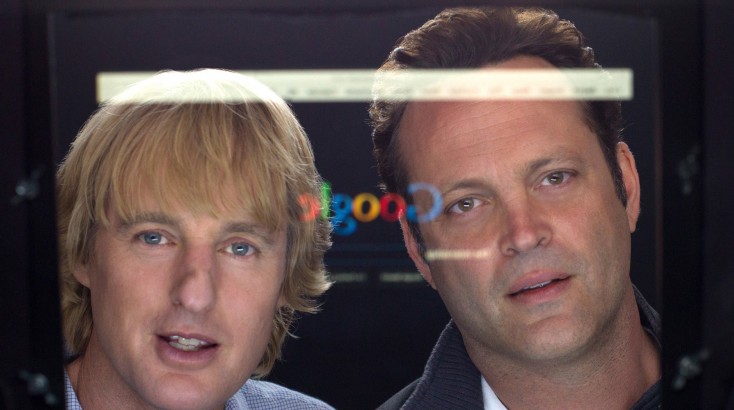 Two of this month’s movies are about a pair of unconventional wannabes motivating a group of similar misfits to achieve unlikely greatness. Pixar’s “Monsters University” is the good one. “The Internship” is the one that is aggravatingly awful.

Salesmen Billy (Vince Vaughn) and Nick (Owen Wilson) find themselves unexpectedly unemployed when their company shuts down. Nick’s one-scene gig working at a mattress store afterward is the movie’s only vaguely amusing moment. That’s thanks to Will Ferrell’s brief cameo as his domineering and absurdly demented boss, whose garishly huge Sanskrit neck tattoo translates as “make reasonable choices.”

The rest of the running time is devoted to manic motormouth Billy and amiably dumb Nick bluffing their way through an internship at Google that will lead to guaranteed jobs for only the winning team. They are twice the age of everyone else in the program, and their band of fellow picked-last outcasts includes the usual braniac-nerd stereotypes that Hollywood thinks are hilarious. None of them knows what life is about or how to have fun until Billy and Nick take them to a club where the repressed mama’s-boy Asian gets lap dances after his first tequila shots, the testosterone-free team leader finds the nerve to hit on an exotic dancer and the no-boyfriend Indian chick gets wet and wild onstage. Later, the group’s cynical head-always-down hater expresses his appreciation for a scenic view of the Golden Gate Bridge. Aww.

Their nemesis is a standard-issue bully (Max Minghella) who exists only to taunt and occasionally triumph over the group.

Although Billy and Nick are so tech unsavvy that Billy says “on the line” instead of “online” and is ignorant of Instagram, they prevail by being loudly and hyperactively irritating. That makes about as much sense as the idea that a smart and gorgeous Google exec played by Rose Byrne would fall for an immature doofus like Nick, who somehow becomes a computer coding master after what looks like a single night of study.

The movie’s endlessly rambling dialog is so exhaustingly verbose it makes Tarantino scripts seem terse. Vaughn’s stream-of-consciousness diarrhea-of-the-mouth shtick proves that more is sometimes less. One of his teammates notes that “you’re saying a lot of words really fast that mean nothing.” True that!

What’s also offputting is the wall-to-wall product placement for Google itself, to the point that the movie seems like a corporate promotional piece. There’s no fun whatsoever to be had at the company’s expense, so don’t expect anything even vaguely resembling the skewering Mark Zuckerberg of Facebook received in “The Social Network.”

Because “The Internship” ostensibly is a comedy, maybe it shouldn’t matter that its plot seems like a cynical wish fantasy aimed at clueless middle-aged men left behind by the information-age job market. Maybe this unrealistic underdog parable wouldn’t seem as condescending if the no-surprises screenplay (by Vaughn and Jared Stern) were funnier. But there’s something cruel about even jokingly suggesting in this economy that arrogant obnoxiousness will trump skills, education and experience in the business world.

Everyone knows that only works in politics.