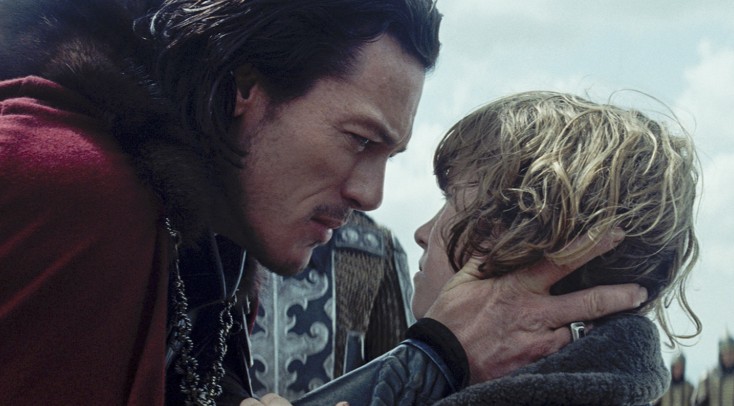 LUKE EVANS stars as Vlad in “Dracula Untold”, the origin story of the man who became Dracula. ©Universal Pictures.

“Dracula Untold” presents a newer take on the age-old vampire tale. Based loosely on the true exploits of Transylvanian prince Vlad the Impaler, the film serves as an origin story for what Universal hopes will be a monsterpalooza reincarnating the studios’ classic monster roster. The film is elevated above its more fantasy/action gothic romantic themes by the compelling performance of Luke Evans in the title role.

War to Peace and Back: It’s the 15th century and, in backstory, we learn that Prince Vlad Tepes (Luke Evans of “The Hobbit: The Desolation of Smaug” and “Fast & Furious 6”) was conscripted as a boy by rampaging Turks who entered Transylvania demanding young boys to act as child soldiers; pawns in their world domination campaign. It was with them that he learned to kill without emotion thus, in later, adult battles, gaining the title of “Vlad the Impaler” for displaying the bodies of invading soldiers on poles.

Cut to 10 years later and now peaceful Vlad is happy with gorgeous wife Mirena (Sarah Gadon of “The Amazing Spider-Man 2” and “Belle”) and smart, cute tween son Ingeras (Art Parkinson of “Game of Thrones”). It’s déjà vu all over again when Vlad’s peace is challenged by returning Turks. This time the sultan in charge is a “friend” Vlad met as a boy, the old sultan’s son Mehmet (Dominic Cooper), who also demands 1,000 Transylvanian boys to fight his wars and includes Vlad’s son among them. Prince Vlad no longer has a standing army. His people will be slaughtered. At first, it appears that he will give Mehmet the country’s sons but can’t bring himself to make that deep a sacrifice.

Learning that a bloodthirsty ghoul/demon living in a mountain cave nearby has slaughtered some Turks already, Vlad climbs the mountain to seek his help but the ghoul is an ancient vampire (Charles Dance of “Game of Thrones” and “Underworld: Awakening”). He can give Vlad super strength and other magical vampire powers for three days. Only if Vlad can avoid the accompanying thirst for human blood, can he return to his human state. Can he hold out? Will Vlad’s family and country be saved? Will he destroy his enemy?

For vampire movie and horror purists, “Dracula Untold” probably isn’t bloody enough. A sympathetic Dracula just might not be as scary. Is there room in classic horror iconology for a “monster” with compassion? The film is more of an action/fantasy, more “Game of Thrones” than Nosferatu or early Bela Lugosi. This Drac is more dark superhero than supernatural horror icon. Horror does have a place in the film of course. When Vlad is in full vamp mode, he is pretty frightening but his personal tragedy might cancel some of that out. Bat-heavy action sequences are interesting but fight action is a little more “300” than I would have liked.

Fact is, Luke Evans is one hot Dracula and the film’s script provides him plenty of emotion and character development for a great actor to chew on. Vlad goes from captured child soldier to bloody impaling warrior to peaceful ruler and finally to monster but all for home and family. You just like this vampire. If you liked peaceful and hunky vamp Edward in the “Twilight” series, this new version of Drac is more gritty and doesn’t sparkle but his brooding sex appeal just might be your cup of blood.

Some of the film’s dialogue is corny but nothing that doesn’t suit the era. Some of the origin story is obviously borrowed from Francis Ford Coppola’s “Bram Stoker’s Dracula,” especially the short origin scenes in which Gary Oldman as Dracula donned red dragon armor and went nearly mad when his beloved wife jumped/fell to her death from a very high cliff.

Can a sad origin story with family loss work for a classic monster just as it does for Batman? Can a Dracula who is more physically and emotionally vulnerable than Dracs we’ve seen before still haunt our nights? Audiences will decide but the film is set up for a sequel that brings Drac into our era.

If you can trick your brain into not making comparisons to the thousands of Dracula films coming before it and just accept “Dracula Untold” on its own merit, it’s an entertaining visit to the cinema packing romance, fantasy, effects, war action and a compelling antihero along with it.