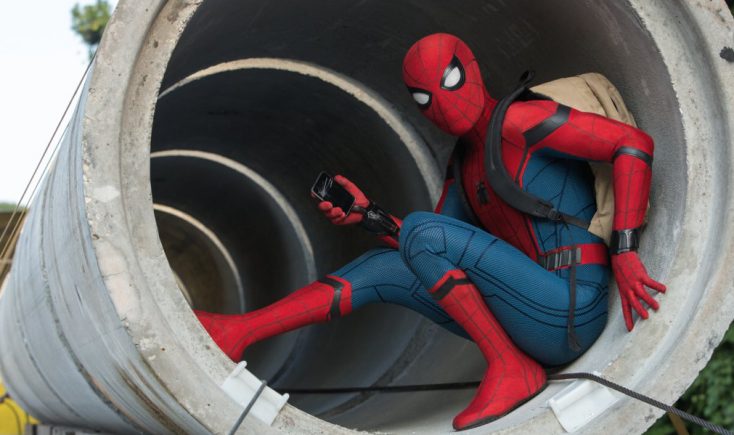 “Spider-Man: Homecoming” gets enough little things wrong about the classic superhero to bug fans of the original comic-book version of the character. Fortunately, it gets two very big things right: Tom Holland is the most likeable and age-appropriate actor ever to take on the role, and finally bringing the webslinger into the Marvel universe of other heroes in one of his own movies is every fan’s dream come true.

Holland is a youthful and exuberant breath of fresh air for the re-rebooted franchise, making high school sophomore with a secret Peter Parker believably eager, immature and insecure. Previous Parkers Tobey Maguire and Andrew Garfield were too old for the role. Maguire’s Parker also was hindered by the wrongheaded decision that he should shoot webs directly from his wrists as a creepily mutated hybrid, instead of from mechanical webshooters.

Because Sony/Columbia owns the rights to make Spider-Man movies, the character never was able to swing over and interact with any Disney/Marvel heroes until his memorable cameo in last year’s “Captain America: Civil War.” His relationship with Robert Downey Jr.’s wealthy genius inventor and benefactor Tony Stark (aka Iron Man) from that outing continues here, Captain America pops up for a cameo or three, and the alien invasion from 2012’s “The Avengers” is referenced as taking place in the same New York where Parker is a science student in Queens.

Michael Keaton hams it up as the obnoxiously vicious Adrian Toomes, whose illegal sales of salvaged alien technology from that invasion catch Spider-Man’s attention during an ATM robbery that goes disastrously wrong. Toomes’ much lower-tech incarnation in 1960s comics by Stan Lee and Steve Ditko was called The Vulture, but (in an obvious nod to Keaton’s Oscar-nominated role in 2014’s “Birdman”) he only is referred to here as “the bird guy.”

Toomes gets into the action in a huge metallic contraption with massive rotors and what looks like a more than 20-foot wingspan. The suit seems ridiculously massive and heavy in a world where Iron Man, and even The Falcon, get airborne with a lot less elaborate equipment, but it’s definitely intimidating.

When Parker isn’t pestering Stark’s right-hand man Happy Hogan (Jon Favreau) with endless calls and texts about when Spider-Man can Avenger-up for another mission, he’s John-Hughes-style high-schooling with nerdy best friend Ned (Jacob Batalon), name-calling nemesis Flash (Tony Revolori), fantasy dream girl Liz (Laura Harrier) and sardonic oddball Michelle (Zendaya). A wacky Spidey chase scene through suburban backyards, complete with asides to people he encounters, is such an obvious homage to “Ferris Bueller’s Day Off” that producers apparently thought they should acknowledge their debt by including a shot of the movie playing on a TV in the background.

The movie’s flaws include a little too much scary-brutal violence for a flick that should have stayed lighter even in the fight scenes, and some miscastings that range from unfortunate to patronizing to downright bizarre. Keaton is so crazy-eyed and cruelly nasty from the get-go that he never seems human (unlike, for example, Thomas Haden Church’s thoughtful portrayal of bad guy Sandman in 2007’s “Spider-Man 3”). Flash, Liz and a much more important character from the comics whose identity is a last-act reveal are no longer Caucasian, making this version of Parker’s world more diverse but regrettably disrespectful of the source material. Likewise, turning Parker’s elderly and sickly Aunt May into a tank-top-rocking 50-something beauty who is sexy enough to elicit horndog appreciation from Stark, a lusty “hot Italian lady” compliment from a bodega owner and free sticky noodles from a leering Thai waiter is just plain weird.

And while the amiably endearing Ned provides great comic relief (“Do you lay eggs? Can you spit venom? Can you summon an army of spiders?”), giving Parker a buddy who shares his unpopular-loser social status and knows his secret identity defeats the point of Parker being a misunderstood loner. Like director Sam Raimi’s Spider-Man trilogy, this movie makes the mistake of having too many people know that Parker is Spider-Man way too soon. Unlike almost every other hero in what is known as the Marvel Cinematic Universe, Parker has a secret identity, so why throw that away? Similarly, giving Spider-Man a souped-up suit with an artificial-intelligence voice that provides him with KITT-car-like guidance and advice robs the character of his sometimes awkward autonomy.

Director Jon Watts (2015’s “Cop Car”) gives the film an almost cheesy vibe that works by keeping things teen-comedy casual for the most part. The special effects are a little inconsistent, sometimes making Spidey seem too much like a weightlessly flitting CGI image, and some too-fast fight scenes are hard to follow. One of the most dramatic action scenes turns out to be one of the simplest, involving plummeting-elevator peril inside the Washington Monument.

Watts and five other writers get screenplay credit, which could explain the shifting tone. After Toomes disintegrates—as in for-real outright kills—a henchman, he looks only mildly surprised and quips, “I thought that was the anti-gravity gun.” Later, one of the movie’s best lines is so absurd that it seems to have been lifted straight from “The Simpsons.” (It’s what Parker’s teacher says after a field-trip disaster is averted.)

In the “non-spoiler” category (as in “things that don’t happen”), there is no J. Jonah Jameson, no Gwen Stacy, and the writers strangely resist a perfect opportunity to have the public mistakenly regard Spidey as a villain (which was a staple of the comics).

On the positive side, the 1960s animated TV series theme song is back (although without lyrics), Stan Lee makes another welcome cameo, and just about all of the movie’s humor actually is funny. Also, after playing a video of Captain America addressing students, a deadpan-disinterested teacher notes that he’s “pretty sure this guy’s a war criminal now,” which is a nice nod to current Marvel continuity.

Stick around for two bonus scenes at the end. The last one works even though it’s the second time a Marvel-character movie has referenced the same classic gag. Which is appropriate, because “Spider-Man: Homecoming” proves that everything old really can be new again.

7/10/17 Addendum (warning: contains spoiler): After the movie’s opening weekend, a story appeared in which Marvel Studios President Kevin Feige said that the third character mentioned above who underwent a race change for this reboot actually is not the person we are led to believe she is. In the movie, Zendaya’s character Michelle (who is black) mentions at the end of the movie that her friends call her MJ, implying that she will be this universe’s version of the
classic comics character Mary Jane (MJ) Watson. Sure, “Michelle” isn’t “Mary,” but it seemed unlikely that the franchise would expect audiences to infer that this MJ is merely another girl who happens to go by that nickname, and she’s not the as-yet-unintroduced MJ who plays such a crucial role in Spider-Man’s life. Feige, however, is now saying that “we never even looked at it as a big reveal necessarily but more of just a fun homage to his past adventures and his past love. She’s not
Mary Jane Watson. She never was Mary Jane Watson.” (See the article at https://www.comicbookmovie.com/spider-man/homecoming/spoilers-kevin-feige-reveals-whether-or-not-mj-mary-jane-watson-in-spider-man-homecoming-a152313 at ComicBookMovie.com for more details.)

As the writer of the article notes, “It’s possible that Marvel and Sony wanted to test the waters with the whole ‘MJ’ reveal and that they’ve now realized that it would have been a mistake to handle Mary Jane like this.” That’s exactly what I think. Having Michelle announce that she goes by MJ without expecting everyone to assume that she will be the MJ is the equivalent of having Peter meet a fellow student named Gwen who would turn out to be just another girl who happened to go by that likewise instantly identifiable name. I’m not buying it. But having said that, I’m glad that the classic white redhead version of MJ presumably has yet to meet this new Peter Parker, and that such an important character has not been re-raced to become Michelle.