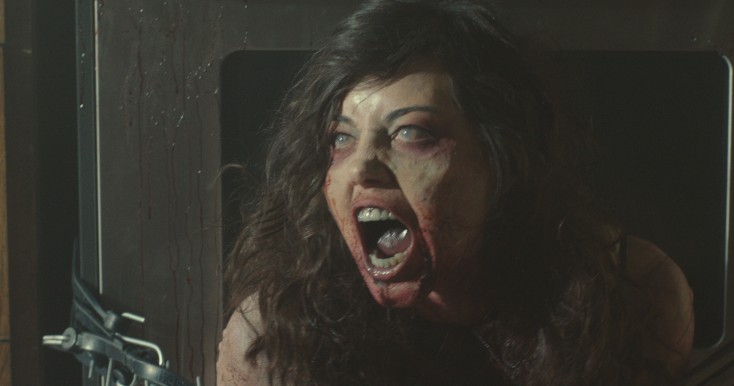 “Life After Beth,” a wickedly funny zombie romantic comedy (zom-rom-com?) in the very tongue-in-cheek tradition of “Shaun of the Dead,” stars Dane DeHaan as Zach, a forlornly mourning boyfriend who regrets all of the things he left unsaid and undone with his gone-too-soon girlfriend Beth (Aubrey Plaza). His chance to make up for those failings when he learns Beth has left her grave and moved back home with her parents doesn’t quite work out as he hopes, however.

Directed and written by Jeff Baena, whose only prior big-screen credit was co-writing 2004’s smartly hilarious “I (Heart) Huckabees,” the movie expertly builds from a deceptively solemn opening to outrageous black-humor slapstick. The film is available on DIRECTV and will be in select theaters Friday, August 15.

After Beth’s burial, detached and sunglasses-wearing Zach sits moodily poolside like a 21st century Ben Braddock. He misses his expired ex so much that he gets caught in a compromising position with one of her scarves by his manically macho brother Kyle (Matthew Gray Gubler), a private security guard who takes his community patrol duties way too seriously.

Perplexed later about why Beth’s parents won’t answer the door when he drops by for a visit, Zach is even more confused when he thinks he sees a resurrected Beth through a window. Sure enough, she’s ba-a-a-a-ck, looking surprisingly good for the undead…even if she may not be quite all there in the brains department.

DeHaan does a great job of portraying Zach’s amusingly conflicted mixture of gratitude about getting Beth back and uneasiness about whether she may suddenly develop a desire to devour him. Having lunch with new pal Erica (the ever adorable Anna Kendrick), Zach compliments that perky, pretty and decidedly not-dead daughter of one of his mom’s friends by saying, “I can breathe through my nose around you.”

Through coincidence or maybe something more, other corpses start turning up around town, including a deceased TV anchor who tries reporting on the crisis in front of a news van. The clever screenplay is full of other offbeat gags involving things like the walking dead’s love of smooth jazz, some misguided assumptions about Haitians (“we can’t all do voodoo, you know”) and deliciously deadpan horror-movie dialog (“You’re weirdly strong,” Erica rather reasonably remarks when grabbed by Beth).

Here’s hoping it won’t be another 10 years before talented director/writer Baena brings something else this good to life on the big screen.