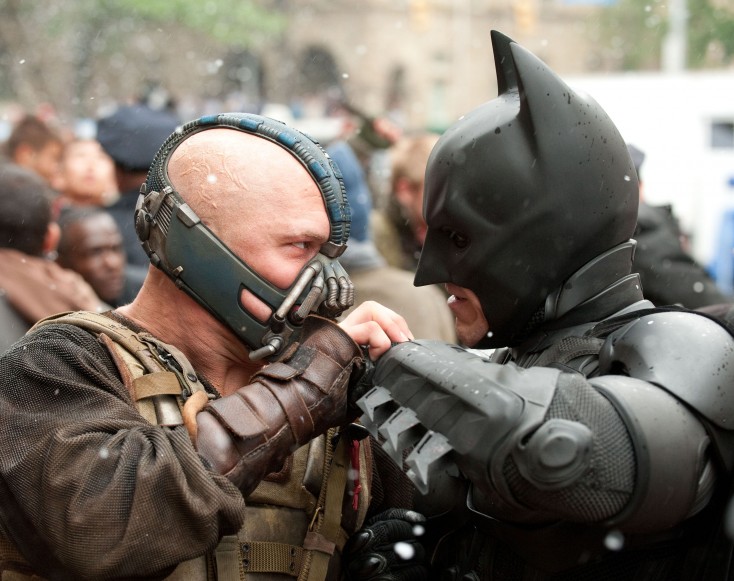 Bloated, boring and obsolete on arrival, “The Dark Knight Rises” is the least fun you’ll have at a superhero movie all year. This final chapter in director/co-writer Christopher Nolan’s Batman trilogy is so relentlessly dull that its sparse action scenes play like obligatory afterthoughts. Compared to the joy-ride thrills of “The Avengers” and the sweet sentimentality of “The Amazing Spider-Man,” this stodgy slog looks positively constipated.

Bruce Wayne (Christian Bale) has been living as a detached recluse for eight years since taking the blame for crimes he didn’t commit at the end of 2008’s “The Dark Knight.” He is enticed back into action after his dead mother’s pearls are stolen by Selina Kyle (an adequate if unexciting Anne Hathaway), who ominously warns him that “a storm is coming.” Although Kyle plainly is Catwoman and later shows up in costume she never is referred to by that name, which sums up the movie’s misguided sense of dignified decorum.

Plot-wise, Nolan seems to be delivering an uninspired admonition for the Occupy era that boils down to “be careful what you wish for.” Tom Hardy, his face half covered by a muzzle-like mask in all but one scene, is the musclebound but mellifluously articulate villain Bane. An economics, explosives and ass-kicking expert with a link to Batman’s past, Bane and his henchmen bankrupt Bruce Wayne and lay siege to Gotham City, cutting it off from the rest of the country with a threat of nuclear annihilation.

Bane also delivers a brutal beatdown to Batman that is nearly as sadistic as Hardy’s mixed martial arts cage matches in 2011’s “Warrior.” Despite the movie’s PG-13 rating, that excruciating scene is no more kid-friendly than Batman’s savagely bloody interrogation of the Joker in “The Dark Knight.”

Speaking of the Joker, absolutely nobody in this movie does, despite the fact that every other living-or-dead major character from Nolan’s first two Batman movies makes an appearance. That lapse makes no narrative sense, considering that part of Bane’s terror campaign involves releasing criminals (including Cillian Murphy’s Scarecrow from 2005’s “Batman Begins”) to sit in judgment of Gotham’s citizenry.

Making even less sense is the fact that Batman is offstage so much he’s almost a cameo player in his own movie, not appearing in costume until 40 minutes have passed. The most unbearably endless Batman-free stretch puts a battered and broken Bruce Wayne literally at the bottom of a hole, imprisoned underground until he can manage to climb his way out. Scenes like that make sitting through this two-hour and 44-minute ordeal occasionally feel like watching bat guano dry.

Gary Oldman returns as police commissioner Jim Gordon, who spends too much time flat on his back. Morgan Freeman twinkles as Wayne’s weapons-inventing equivalent of James Bond’s Q, presenting Batman this time with a lobster-looking jet known simply as the “Bat.” As Wayne’s butler and father figure Alfred, Michael Caine is saddled with soap-operatically earnest scenes such as one in which he explains something preposterous he did in the last movie. New cast members include Marion Cotillard as Wayne’s business-savvy love interest Miranda Tate and Joseph Gordon-Levitt as idealistic straight-arrow cop John Blake.

Almost half of the film was shot in the IMAX format, which is a mixed blessing. While IMAX cityscapes and action scenes are stunningly sharp, the way the movie switches between the gigantic full-frame IMAX shots and narrower widescreen ones can be distracting.

Interestingly, the movie’s nuclear-bomb-related climax is similar to that of “The Avengers,” making the big moment a little too familiar. Also, funny-book fans may resent a deviation from the Batman comics canon that is necessary to make a final twist come as a surprise.

Now that Nolan’s bleakly grim take on Batman has run its course, it’s hard not to hope for a quick reboot of the franchise that won’t take itself so seriously. Joss Whedon, call your agent.