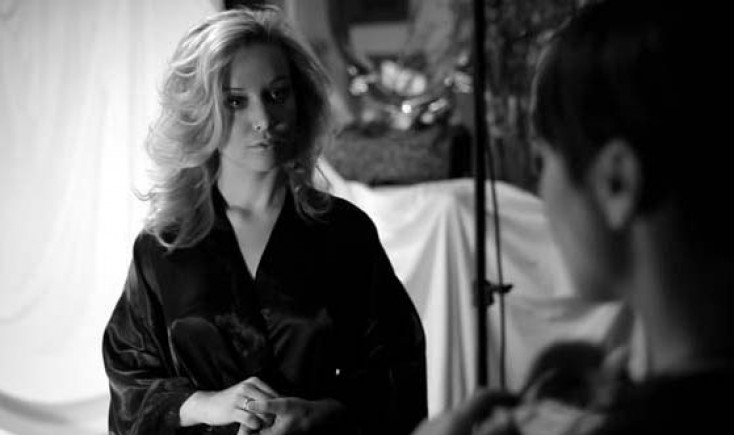 Director/photographer Deborah Anderson gets 16 adult-video actresses to bare more than their bodies in the emotionally revealing documentary “Aroused.” With attitudes ranging from arrogance to introspection, the performers discuss their unusual career with a level of candor that brings two of them to tears.

Viewers expecting lots of bumping and grinding will find the film’s title misleading, because the subjects are anything but aroused. Clips from their movies are scarce, skimpy and mostly soft-core. More than 20 minutes pass before any nudity is glimpsed, and photo-shoot footage of the interviewees going through poses on a bed is more professionally cool than pruriently carnal.

When the documentary shifts to color and begins focusing on extreme close-ups of the women’s beautiful faces and bare breasts, the exposure seems more intimate after getting a sense of what’s beneath all that fabulous flesh. Two of the most thoughtful interviewees are blond beauty Kayden Kross, a former private Christian school student who says that after five weeks of sex ed she still didn’t know she had a vagina, and 41-year-old Francesca Le, who confesses that veterans of the biz don’t tell newcomers about the industry’s dark side.

Kross says the reason so many X-rated actresses come from homes without fathers “is not really because they’re damaged, but because there’s not someone there to disappoint. It’s one thing to disappoint your mother like that, it’s another to disappoint your dad.” The health risks associated with the adult entertainment industry are not mentioned until near the end of “Aroused,” when Le notes that no one is going to tell new hires “you’re definitely going to get an STD,” or that health insurance won’t cover them when they do. “As soon as you start having sex in this business without a condom, you’re putting your life on the line,” she notes, comparing adult performers to stunt men. “That’s why you get paid the big bucks.”

Still, all of the actresses are uniformly defensive about choosing their line of work, and resent being looked down upon by judgmental outsiders. Misty Stone maintains that “we’re probably a lot cleaner than some of the (non-industry) civilians out there.” Teagan Presley says that having sex with adult-video actors who are tested regularly for STDs may be safer than hooking up at a bar with strangers whose history is a mystery.

The film’s most poignant moments come when the single-named Belladonna expresses how “used” she felt when it was taken for granted that she would do something unexpected and extreme on camera. Pointing out that she doesn’t think the industry will be around in five years because of internet piracy, freckled girl-next-doorish Brooklyn Lee tearfully wonders if she may be screwed (although that’s not the word she uses) in more ways than one.

The actress who took the most unusual journey to porn may be Allie Haze, a fresh-faced former Sunday school teacher who married a Baptist preacher at 18. “Just ’cause I look like this doesn’t mean that I don’t get crazy,” she says, after noting that “I like to be choked, I like to be slapped, I love to spit, I love to smack girls.” With professional monikers ranging from the elaborately unlikely Asphyxia Noir, Ash Hollywood, Alexis Texas, Katsuni, Jesse Jane and Lexi Belle to the more believable Lisa Ann, Tanya Tate and April O’Neil, the rest of the documentary subjects are similarly frank about their sexuality.

While their exotic sense of morality may seem exciting, refreshing or disgusting, their stories are never less than interesting. Adult-industry talent agent Fran Amidor offers some hard real-world truths about the industry. She says promiscuous women who get into the biz at 18 don’t think about how it might hinder having a normal relationship in the future. “You will have a scarlet letter on you,” she says. “You will.”